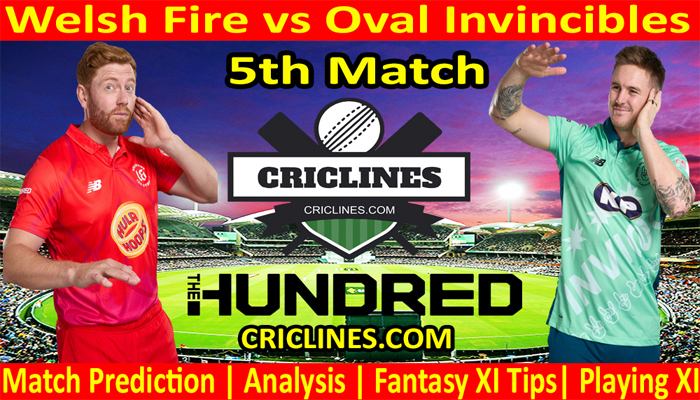 The cricket fans are ready to witness yet another big battle of The 100 League. The 5th match of The Hundred League 2022 is scheduled to play between Welsh Fire and Oval Invincibles on Sunday, 7th August 2022 at Sophia Gardens, Cardiff. We are posting safe, accurate, and secure today match prediction of The Hundred Women Competition free.

Welsh Fire did not perform well in the first edition of The Hundred League and they were the second worst performing team of the previous edition they also failed to have a good start to this second edition of this league. They had lost their very first match of this tournament against Southern Brave by a big margin of nine wickets. On the other side, Oval Invincibles performed well in the first season of this league but they also failed to have a kick start to The Hundred League 2022. They were beaten by London Spirit after a very interesting competition by the margin of just three runs. Key today prediction providers are saying that OVI is the favorite team to win this match.

The performance of the batting order of Welsh Fire was very poor in the opening match where they could manage to score just 107 runs in 100 balls. Remember that they lost the toss and were asked to bat first. Joe Clarke and Tom Banton opened the batting inning and could not provide a good start as Joe Clarke went back to the pavilion without scoring any run. Ben Duckett was the highest run-scorer from their side who scored 40 runs on 31 balls with the help of five boundaries. No other batter from the side of Welsh Fire could manage to put a big total on the board.

Ryan Higgins scored 11 runs while Ollie Pope and Adam Zampa scored 10 runs each. The skipper, J Cobb could manage to score just five runs. The performance of the bowling unit of Welsh Fire was also very poor in the previous match. They leaked the target of 108 runs in just 70 balls. David Payne, Jake Ball, Adam Zampa, Noor Ahmad, and Ryan Higgins were used in the previous match as bowlers. Jake Ball was the only bowler who had a wicket to his name. He picked one wicket in 19 balls against 25 runs. No other bowler from their side could manage to pick any wicket.

The first match of Oval Invincibles was very interesting against London Spirit where they lost by the margin of just three runs. They won the toss and decided to field first. This decision was not right as they leaked 171 runs in their 100 balls inning. R Topley, D Briggs, Mohammad Hasnain, Tom Curran, Sam Curran, and Sunil Narine were the leading bowlers of Oval Invincibles in the previous match. Narine proved the most successful bowler in the previous match with two wickets to his name in 20 balls against 25 runs. Mohammad Hasnain also picked two wickets but he led a lot of runs. He was charged for 40 runs in just 15 balls.

Sam Curran and R Topley picked one wicket each while Tom Curran and D Briggs were the bowlers who could not manage to pick any wicket. The batting order of Oval Invincibles performed well overall but they could not chase the target of 172 runs and scored 168 runs in their 100 balls inning. The key reason why they lost the match was the failure of the top batting order. Their key four batters came back to the pavilion on a total of just 12 runs. The middle and lower batting order of Oval Invincibles performed well in the previous match. Hilton Cartwright was the most successful batter from their side in the previous match with 42 runs on his name on 23 balls with the help of three boundaries and two huge sixes. Jordan Cox scored 39 runs while Danny Briggs remained not out after scoring 29 runs on just 11 balls. He smashed four boundaries and one huge six during his inning.

Oval Invincibles is full of experienced and young players of the t20 foramt. The batting order of this team is also strong and some well-known hitters of the t20 format are part of the squad of this team, so the winning chances of today match for Oval Invincibles have been increased. The equation of who will win today’s cricket match prediction and who will win the cricket match today is mentioned as under.

The 5th Match match of The Hundred League 2022 is going to be held at Sophia Gardens, Cardiff. We had observed in the previous matches played here that the pitch here at this venue is good for batting. The track is slower than the others we have seen and helps the spinners quite a bit. We are hoping that the surface is bound to get slower and be a bit more difficult for batting in this match. A score of 185 is going to be tough to chase.

Who Will Win Welsh Fire vs Oval Invincibles, 5th Match The Hundred League-2022