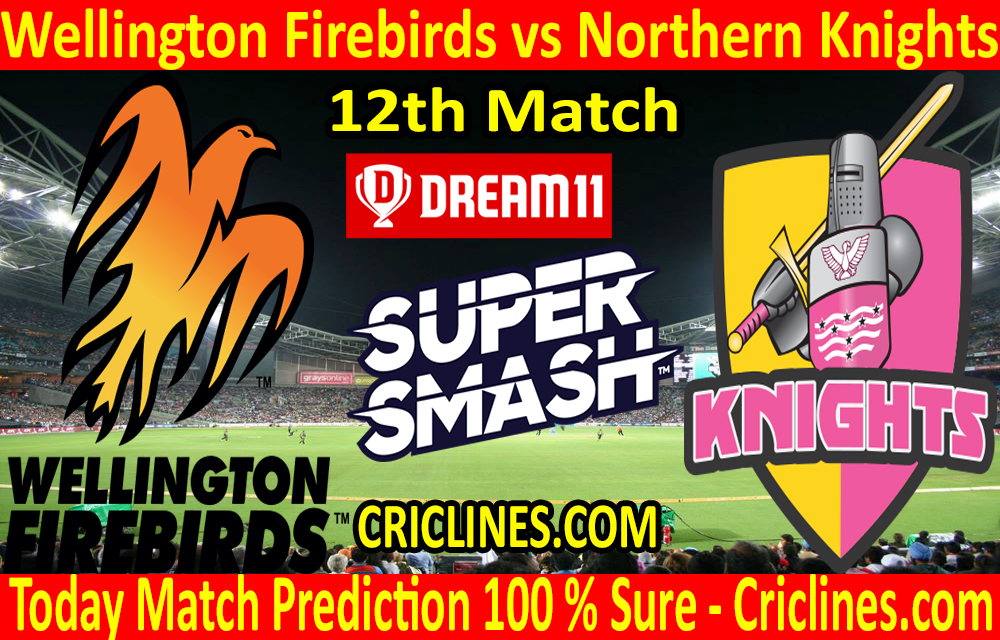 The world is ready to witness yet another big battle of T20 cricket. The 12th Match of Super Smash League 2020-21 is scheduled to play between Northern Knights and Wellington Firebirds on Saturday, 9th January 2021 at Basin Reserve, Wellington. We are posting safe, accurate, and secure today match prediction for all matches of Super Smash League free.

Wellington Firebirds is the best performing team of this tournament right now. They had won all three matches played so far and are leading the points table of this season of the Big Bash League. They had beaten Northern Knights in their most recent match with a handsome margin of nine wickets. They won the toss and decided to field first. The performance of their bowling unit was good in that match. They leaked 148 runs in their inning of 20 overs. James Neesham was the highest wicket-taker from their side who picked two wickets in his four overs bowled out against 23 runs.

Rachin Ravindra, Peter Younghusband, Logan van Beek, and Hamish Bennett picked one wicket each in the previous match. The batting order of Wellington Firebirds also performed well in the previous match. They chased the target of 149 runs in 16 overs. Finn Allen was the most successful and highest run-scorer from their side who remained not out after scoring 91 runs. He faced 50 deliveries and smashed seven boundaries and five sixes. Rachin Ravindra was the other batsman who put some runs on the board. He scored 40 runs while he faced 31 deliveries with the help of three boundaries and two sixes. He also remained not out till the chase of the target.

Northern Knights had almost failed to give their best performance in this season of the Super Smash League. They had played a total of four matches with just one win to their name. They had lost three matches and are laying at the second position from the bottom of the points table. They had won their most recent match against Central Districts with a margin of six wickets. They won the toss and decided to field first. The performance of their bowling unit was outstanding in that match. They leaked 117 runs in their inning of 20 overs. Brett Hampton was the most successful and highest wicket-taker from their side who picked three wickets in his four overs bowled out against just 21 runs.

Frederick Walker and Henry Cooper picked two wickets each in the previous match while Joe Walker and Zak Gibson picked one wicket each. Matthew Fisher and Scott Kuggeleijn were the bowlers who failed to pick any wicket in the previous match. The performance of their batting order was also good in the previous match. They chased the target of 118 runs in 17.4 overs. The skipper, Anton Devcich was the highest run-scorer from their side who scored 35 runs while he faced 22 deliveries and smashed three boundaries and two sixes. He remained not out till the chase of the target. Katene Clarke scored 24 runs while Henry Cooper had 23 runs to his name.

The 12th Match of Super Smash League is going to be held at Basin Reserve, Wellington. The pitch here at this venue should be good for batting as it is in most places around New Zealand. We should have a very high scoring match is we get some warm and sunny conditions. According to the live cricket score, a total of more than 180 runs should be as a par.

The weather forecast for Wellington for matchday is not good. There are some chances of rain but we are hoping that there will be no disturbance during this match.