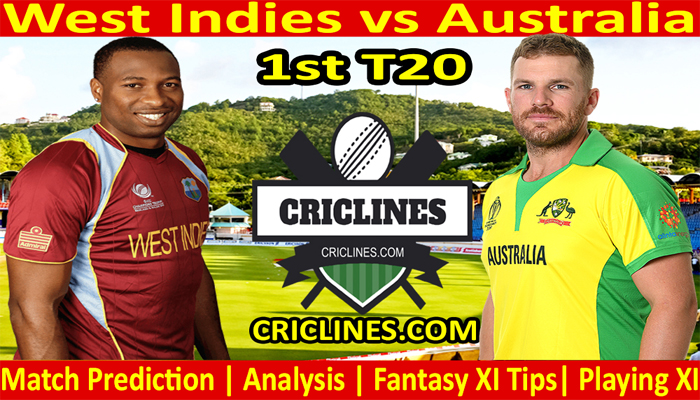 The cricket fans are ready to witness yet another big battle of T20 cricket. The 1st T20 match of Australia tour of West Indies, 2021 is scheduled to be held on Friday, 9th July 2021 at Daren Sammy National Cricket Stadium, Gros Islet, St Lucia. We are providing 100 safe, perfect, and accurate today match prediction for all matches of West Indies and Australia.

West Indies is going to play five t20 and three ODI matches against Australia on their home venues. West Indies had not played a lot of bilateral series against Australia and it was back in March 2018 when these two teams faced each other in the series. This series is very important for both sides and will help to get a good combination for the upcoming world cup this year. Both teams are strong and experienced when it comes to white-ball cricket and we will have some interesting matches to watch. We should remember that West Indies is still world champions of T20 cricket.

West Indies had recently lost a series against South Africa at their home venues and they have to put their full effort in this series against one of the strongest teams of T20 cricket. The batting performance of the West Indies was not good as many of us were expecting and this happened due to their strategy of hitting every ball out of the park. Kieron Pollard and Evin Lewis were the batsmen who played sensible cricket and scored runs in almost each and every match of the series against South Africa. Andre Russell, Nicholas Pooran, and Chris Gayle’s bat failed to put some big runs on the board but they have to give their full support to the middle order of West Indies against Australia. The opening batting pair is a big problem for West Indies as they don’t have a set pair.

Andre Fletcher had been dropped in his home series against Australia and Lendl Simmons will be replacing him. Jason Holder and Shimron Hetmyer had not been part of the playing eleven on regular basis but we are sure that both players will get a place in the playing eleven in this series. Fabian Allen is a good option for the middle overs but he is injured and we think that he will be missing the first match. We have no doubt that the batting order of West Indies is strong and experienced but they are not stable right now. Obed McCoy and Dwayne Bravo were good with the ball in the most recent series against South Africa. Both bowlers picked wickets in almost each and every match with the help of Andre Russell who was also outstanding with the ball. We can add Kieron Pollard and Chris Gayle to the list of all-rounders which is a positive sign for this team. Kevin Sinclair and Sheldon Cottrell can also have a chance in this match.

Australia is a completed and set team right now and this series will help them to build the best team for the World Cup. Almost all senior players of Australia are available and some new players can also get a chance in this series to shine. Aaron Finch will be opening the batting inning of Australia and he has a good record when he plays as an opener. He will also lead the Australian team in this tour of the West Indies. He had been in good form and had scored two fifties and his run-scoring average is near about 50. We think that Josh Phillipe will be the second partner of Finch as an opener. He had been outstanding in domestic cricket he had played in Australia and also in the other leagues but he had not proven himself in international cricket.

Ben McDermott, Ashton Turner, Alex Carey, Matthew Wade, and Moises Henriques are available for the selection for the batting in the middle overs. Ashton Agar, Daniel Christian, and Mitchell Marsh can bat well in the last overs which gives some real flexibility to the batting order of Australia. Ashton Agar and Mitchell Marsh will be part of the final playing eleven for the first match for sure but we think that Daniel Christian will also get a place in the playing eleven. Mitchell Marsh had shown us some power hitting in recent times. The bowling department of Australia is fully loaded, strong, and experienced. Ashton Agar and Dan Christian are excellent bowlers and it will be difficult to score runs against these bowlers in Caribbean conditions. Rilee Meredith, Josh Hazelwood, Mitchell Starc, and Adam Zampa provide extra power to the bowling department of Australia.

West Indies had played a total of 135 T20 matches so far. They won 60 matches while other teams won 69 matches. 6 matches of West Indies were ended with no result.

Australia had played 136 T20 International matches right now with 71 wins to their name while they had lost 62 matches and their three matches were ended with no result.

West Indies had played 11 T20 matches against Australia where they won 6 matches while Australia had won five matches.

The 1st T20 match between West Indies and Australia is going to be played at the Daren Sammy National Cricket Stadium, Gros Islet, St Lucia. The pitch at this stadium is excellent for batting. The boundaries at this venue are short and will bring the spinners into play. The pitch will continue to be good for batting throughout the match.

Mitchell Marsh had improved his six-hitting capabilities in recent times. He will be a key player to watch from Australia’s side while Evin Lewis and Kieron Pollard are key players to watch from West Indies’ side.

Who Will Win West Indies vs Australia 1st T20

Who Will Win West Indies vs Australia 1st T20 Toss-AUS

Who Will Win West Indies vs Australia 1st T20 Match-WI