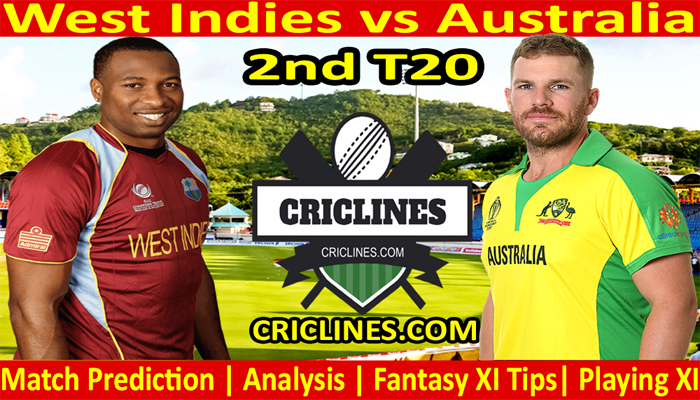 The world is ready to witness yet another big battle of T20 cricket. The 2nd T20 match of Australia tour of West Indies, 2021 is scheduled to be held on Saturday, 10th July 2021 at Daren Sammy National Cricket Stadium, Gros Islet, St Lucia. We are providing 100 safe, perfect, and accurate today match prediction for all matches of West Indies and Australia.

West Indies had a kick start to this home series of five T20 matches and need to continue this momentum. They also won the 1st match against South Africa but lost the rest of the matches. West Indies is a team that can continue winning momentum and they have to do that in this series against Australia.

West Indies won the 1st match due to the best performance by their bowling department. They were asked to bat first after losing the toss. The batting order of West Indies is strong and experienced but they failed to put a big total on the board. They scored 145 runs in their 20 overs inning. Andree Russell was the most successful and highest run-scorer from their side who scored 52 runs on just 28 deliveries with the help of three boundaries and five huge sixes. The opening batsman, Lendl Simmons scored 27 runs while Shimron Hetmyer could manage to score 20 runs. Nicholas Pooran was leading the West Indies team in the absence of Kieron Pollard who scored 17 runs.

The way how the bowling department of West Indies performed in the 1st match against Australia was just outstanding. They defended a low total of 146 runs and send the strong batting order of Australia back to the pavilion on a total of 127 runs in 16 overs. Almost all bowlers from West Indies’ side performed well. Obed McCoy was the highest wicket-taker with four wickets to his name. He bowled out four overs and leaked 26 runs. Hayden Walsh picked three wickets in his four overs bowled out while he was charged for 23 runs. Fabian Allen picked two wickets while Andre Russell picked one wicket in his one over bowled out while he was charged for 14 runs.

Australia is known as one of the strongest teams of white-ball cricket but they were destroyed by the bowling unit of West Indies in the 1st match. The bowling department of Australia performed well and leaked 146 runs in their inning of 20 overs. Josh Hazlewood was the highest wicket-taker who picked three wickets in his four overs bowled out against just 12 runs. Mitchell Marsh also had an outstanding performance with the ball. He picked two wickets in his four overs bowled out while he was charged for 26 runs. Mitchell Starc, Ashton Agar, Adam Zampa, and Daniel Christian were the bowlers who failed to pick any wicket against West Indies in the 1st match.

The batting order of Australia almost collapsed in the 1st T20 match. They were all-out on a total of 127 runs in 16 overs while chasing the target of 147 runs. Mitchell Marsh was the only successful batsman from their side who put some runs on the board. He scored 51 runs on 31 balls with the help of five boundaries and two huge sixes. Matthew Wade scored 33 runs while Moises Henriques could manage to score 16 runs. Daniel Christian had 10 runs to his account. No other batsmen from Australia’s side could even enter into a double-figure.

West Indies had played a total of 136 T20 matches so far. They won 61 matches while other teams won 69 matches. 6 matches of West Indies were ended with no result.

Australia had played 137 T20 International matches right now with 71 wins to their name while they had lost 63 matches and their three matches were ended with no result.

West Indies had played 12 T20 matches against Australia where they won 7 matches while Australia had won five matches.

The 2nd T20 match between West Indies and Australia is going to be played at the Daren Sammy National Cricket Stadium, Gros Islet, St Lucia. The pitch at this stadium is excellent for batting. The boundaries at this venue are short and will bring the spinners into play. The pitch will continue to be good for batting throughout the match.

Who Will Win West Indies vs Australia 2nd T20

Who Will Win West Indies vs Australia 2nd T20 Toss-AUS

Who Will Win West Indies vs Australia 2nd T20 Match-WI