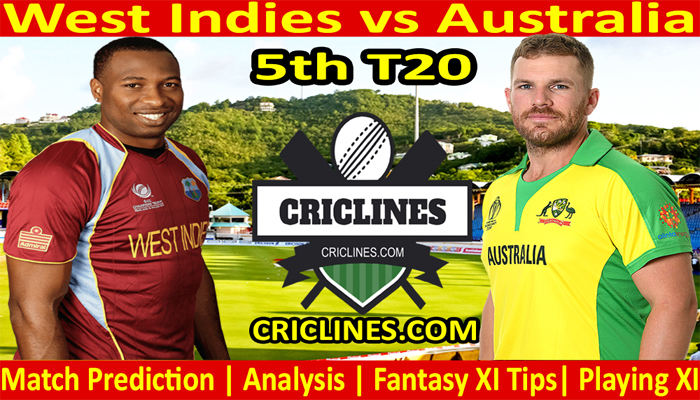 The cricket fans are ready to witness yet another big battle of T20 cricket. The 5th T20 match of Australia tour of West Indies, 2021 is scheduled to be held on Friday, 16th July 2021 at Daren Sammy National Cricket Stadium, Gros Islet, St Lucia. We are providing 100 safe, perfect, and accurate today match prediction for all matches of West Indies and Australia.

Finally, Australia registered a win in this tour of the West Indies after losing three t20 matches in a row due to the best performance by their batting order. Mitchell Marsh and the skipper, Aaron Finch played a superb inning.

West Indies had won the series of five matches but had lost a golden chance of having whitewash again the strong team of the world. They lost the 4th match by the margin of just four runs where they lost the toss and were asked to field first. The bowling department of West Indies almost failed to give the best performance and leaked 189 runs in their inning of 20 overs. Hayden Walsh was the highest wicket-taker from their side who picked three wickets in his four overs bowled out while he was charged for 27 runs. Fabian Allen, Andree Russell, Oshane Thomas picked one wicket each while Lendl Simmons, Akeal Hosein, and Sheldon Cottrell remained wicketless.

The batting order of West Indies performed well in the 4th T20 match but they failed to chase the target of 190 runs and scored 185 runs in their inning of 20 overs. Lendl Simmons was the most successful and highest run-scorer from their side who scored 72 runs. He faced 48 deliveries and smashed two huge sixes and 10 boundaries during his inning. Evin Lewis smashed the inning of 31 runs on 14 balls with the help of two huge sixes and four boundaries. Fabian Allen scored 29 runs while Andre Russell remained not out after scoring 24 runs.

The batting order of Australia failed to put some good runs in the previously played matches but they put a good total on the board in the previous match. They scored 189 runs in their 20 overs inning. Mitchell Marsh was the most successful batsman from their side who scored 75 runs on 44 balls with the help of four boundaries and four huge sixes. The skipper, Aaron Finch also had an outstanding performance with the bat. He scored 53 runs on 37 deliveries and smashed five boundaries and three sixes. Dan Christian scored 22 runs.

The bowling department of Australia failed to give their best performance but they defended the target of 190 runs and leaked 185 runs in their inning of 20 overs. Mitchell Marsh was the most successful and highest wicket-taker from their side who picked three wickets in his four overs bowled out against 24 runs. Adam Zampa also had an outstanding performance with the ball. He picked two wickets in his four overs bowled out while he was charged for 20 runs. Riley Meredith could manage to pick just one wicket.

West Indies had played a total of 139 T20 matches so far. They won 63 matches while other teams won 70 matches. 6 matches of West Indies were ended with no result.

Australia had played 140 T20 International matches right now with 72 wins to their name while they had lost 65 matches and their three matches were ended with no result.

West Indies had played 15 T20 matches against Australia where they won 9 matches while Australia had won six matches.

The 5th T20 match between West Indies and Australia is going to be played at the Daren Sammy National Cricket Stadium, Gros Islet, St Lucia. The pitch at this stadium is excellent for batting. The boundaries at this venue are short and will bring the spinners into play. The pitch will continue to be good for batting throughout the match.

Who Will Win West Indies vs Australia 5th T20

Who Will Win West Indies vs Australia 5th T20 Toss-WI

Who Will Win West Indies vs Australia 5th T20 Match-WI