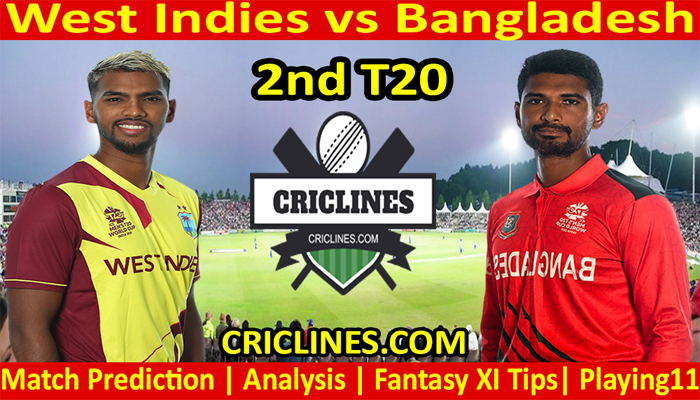 The world is ready to witness yet another big battle of T20 cricket. The 2nd T20 match of the Bangladesh tour of West Indies, 2022 is scheduled to be held on Sunday, 3rd July 2022 at Windsor Park, Roseau, Dominica. We are providing 100 safe, perfect, and accurate today match prediction of the West Indies and Bangladesh.

The first match between West Indies and Bangladesh was washed out by the rain and as a result, the match ended with no result. We are sure that the weather will be good for this match and we will watch a full match. Bangladesh was not good in the first uncompleted match where they scored 105 runs in 13 overs while their eight batters came back to the pavilion. On the other hand, the bowling department of West Indies was just superb. We mentioned in today prediction of the first match that the bowling department of WI will perform well in the home conditions and they did it.

West Indies had some best bowlers in the squad and they were just good in the first match. West Indies had recently won the test series against Bangladesh and their confidence will be high. There are some major changes in the squad of West Indies for the format of shorter overs but they are very strong and experienced. West Indies is playing in the home conditions and they are very dangerous in these conditions as we had observed in the past. West Indies is a strong batting side which is led by Rovman Powell, Shamarh Brooks, and Brandon King. These are the batters who can be very dangerous for the bowlers of Bangladesh. Kyle Mayers can also play well in the middle and especially in the last overs.

Romario Shepherd almost destroyed the batting order of Bangladesh. He picked three wickets in the first match in three overs against just 21 runs. Nicholas Pooran is going to lead West Indies in this home series of three T20 matches. He is a good batter and also a wicket-keeper. Devon Thomas is the other wicket-keeper batter who is part of the West Indies for this series but we don’t think that he will be part of the final playing eleven for this match in the presence of Nicholas Pooran. The bowling department of West Indies is also good when they play on the home grounds. Akeal Hosein and Alzarri Joseph will be leading the bowling department of WI with Obed McCoy, Romario Shepherd, Odean Smith, and Hayden Walsh. Keemo Paul is also available for the selection of this match and we are sure that he will get a chance in the final playing XI for this match. Hayden Walsh picked two wickets while Akeal Hosein, Obed McCoy, and Odean Smith picked one wicket each.

Bangladesh totally failed to give the best performance in the opening match. They could manage to score 105 runs and lost eight wickets. This tour of the West Indies is very important for Bangladesh as they have to play two major events of cricket like the Asia Cup and the World Cup in the next months. They lost the test series and they will be under pressure but they have to win this series to get some confidence for the big events of cricket. Bangladesh also had made some key changes in the squad for this series of three matches. Remember that BAN had not played a lot of T20 matches in recent times and they will need some time to get the best combination. Mahmudullah is the regular leader of Bangladesh for the shorter format of cricket and he will also lead in this series of three matches. He is a batting all-rounder and had played 115 T20Is for Bangladesh. Munim Shahriar is the new addition to the batting squad of Bangladesh but we don’t think that he will get a chance to play this match as Bangladesh will inter in this match with full force.

Shakib Al Hasan was the highest run-scorer in the first match with 29 runs to his name. He is the senior batter in the squad of Bangladesh who will be handling the batting department of Bangladesh with Afif Hossain, Mosaddek Hossain, Mahedi Hasan, and the skipper, Mahmudullah. Litton Das, Anamul Haque, and Nurul Hasan are the wicket-keeper batters in the squad of Bangladesh and we are sure that Litton Das will get a chance in the final playing eleven for this match. The bowling department of Bangladesh is not very strong when we compare it with West Indies. Mustafizur Rahman, Shoriful Islam, Nasum Ahmed, and Taskin Ahmed are the star bowlers of Bangladesh while Mehidy Hasan is also available as a bowling all-rounder.

West Indies had played a total of 161 T20 matches so far. They won 68 matches while other teams won 83 matches. Their 10 matches ended with no result.

Bangladesh had played 126 T20 International matches right now with 44 wins to their name. They had lost 79 matches while their 3 matches were ended with no result.

West Indies had played 14 T20 matches against Bangladesh where they won 7 while Bangladesh had won 5 matches one match between these three teams ended with no result and two matches were tied.

The 2nd T20 match between West Indies and Bangladesh is going to be played at Windsor Park, Roseau, Dominica. The pitch at this stadium is excellent for batting. The boundaries at this venue are short and will bring the spinners into play. The pitch will continue to be good for batting throughout the match. A total of 280 can be a good total to defend.

The weather forecast in Dominica on match day is not very good for a cricket match. There are some chances of rain but that is possible that we may have an interrupted match.

Who Will Win West Indies vs Bangladesh 2nd T20

Who Will Win West Indies vs Bangladesh 2nd T20 Match-WI

Dream11 prediction for West Indies vs Bangladesh. After checking the laT20 player’s availability, the Dream 11 Team for this match between West Indies and Bangladesh is mentioned under.

The above-mentioned match prediction of West Indies vs Bangladesh is based on our research, understanding, and analysis. You can consider the point we had provided you and finally, the decision will be yours.