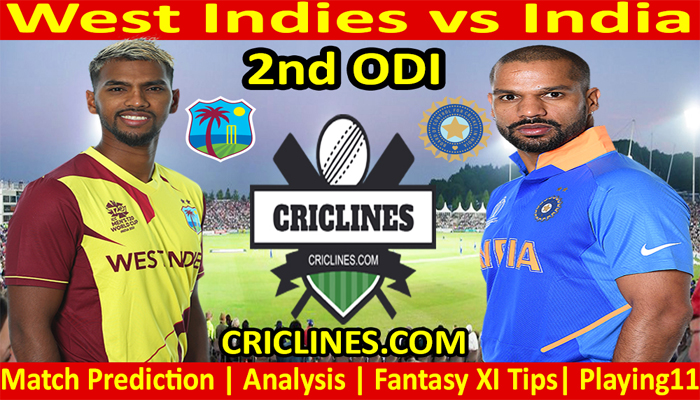 The world is ready to witness yet another big battle of ODI cricket. The 2nd ODI match of the India tour of West Indies, 2022 is scheduled to be held on Sunday, 24th July 2022 at Queen’s Park Oval, Port of Spain, Trinidad. We are providing 100 safe, perfect, and accurate today match prediction of West Indies and India.

The bowling department of West Indies did not perform well in the first match where they leaked 308 runs in 50 overs. They did well in the last overs and stopped India from scoring a big total which was looking near about 330 to 350 runs in 50 overs. Alzarri Joseph, Jayden Seales, Romario Shepherd, K Mayers, Motie, Akeal Hosein, and the skipper, Nicholas Pooran were used as bowlers in the first match. Gudakesh Motie was the most successful bowler from the side of West Indies who picked two wickets in ten overs against 54 runs. Alzarri Joseph was the other bowler who had two wickets to his name in ten overs while he was charged for 61 runs. Akeal Hosein and Romario Shepherd picked one wicket each while no other bowler from the side of West Indies could manage to pick any wicket.

The way how the batting order of West Indies performed in the previous match was just superb even though they could not chase the target of 304 runs and scored 300 runs in 50 overs. The wicket of Nicholas Pooran was the turning point of the match. The role of the batting order of the West Indies will also be very important in this match. We know that the wicket is not good for the bowlers and this match will also be high scoring. Kyle Mayers was the most successful batter in the previous match from the side of West Indies who scored 75 runs on 68 balls with the help of 10 boundaries and one huge six. Brandon King was also good with the bat and scored more than fifty runs. Romario Shepherd remained not out after scoring 39 runs on 25 balls with the help of three boundaries and two huge sixes.

The top batting order of India was just superb in the first match, especially the openers. Dhawan and Shubman Gill open the batting inning for India and scored 119 runs for the partnership of the first wicket. India scored 103 runs for the partnership of the second wicket and at this time, many of us were expecting that India will score more than 340 runs in total 50 overs but the middle and lower batting order of India could not do well. Dhawan was the most successful and highest run-scorer from the side of India with 97 runs to his name. He was also unlucky as missed a golden chance of scoring a century. He faced 99 balls and smashed 10 boundaries and three huge sixes during his inning. Shubman Gill also showed some power hitting and scored 64 runs at the strike rate of 120.

Shreyas Iyer was the other batter from the Indian side who scored more than fifty runs. He scored 54 runs and smashed five boundaries and two huge sixes during his inning. We don’t think that the performance of the bowling department of team India was good even though they defended the target of 304 runs and leaked 300 runs in 50 overs. Mohammed Siraj, Prasidh Krishna, Shardul Thakur, Axar Patel, Deepak Hooda, and Yuzvendra Chahal were used as bowlers. Mohammed Siraj was the most successful bowler with two wickets to his name in ten overs against 57 runs. Yuzvendra Chahal also picked two wickets in ten overs bowled out while he was charged for 58 runs. Shardul Thakur was the other bowler who picked two wickets in eight overs and leaked 54 runs. Deepak Hooda, Axar Patel, and Prasidh Krishna were the bowlers who could not manage to pick any wicket.

West Indies had played a total of 848 ODI matches so far. They won 409 matches while other teams won 399 matches. Their 30 matches ended with no result and 10 matches were tied.

India had played 1006 ODI International matches right now with 524 wins to their name. They had lost 423 matches while their 41 matches ended with no result and nine matches were tied.

West Indies had played 137 ODI matches against India where they won 64 while India had won 67 matches four matches between these three teams ended with no result and two matches were tied.

The 2nd ODI match between West Indies and India is going to be played at Queen’s Park Oval, Port of Spain, Trinidad. The pitch at this stadium is excellent for batting. The boundaries at this venue are short and will bring the spinners into play. The pitch will continue to be good for batting throughout the match. A total of 280 can be a good total to defend.

The weather forecast in Trinidad on match day is not very good for a cricket match. There are some chances of rain but that is possible that we may have an interrupted match.

Who Will Win West Indies vs India 2nd ODI

Who Will Win West Indies vs India 2nd ODI Match-IND

Dream11 prediction for West Indies vs India. After checking the ODI player’s availability, the Dream 11 Team for this match of West Indies and India is mentioned under.

The above-mentioned today prediction of West Indies vs India is based on our research, understanding, and analysis. You can consider the point we had provided you and finally, the decision will be yours that you have to make.