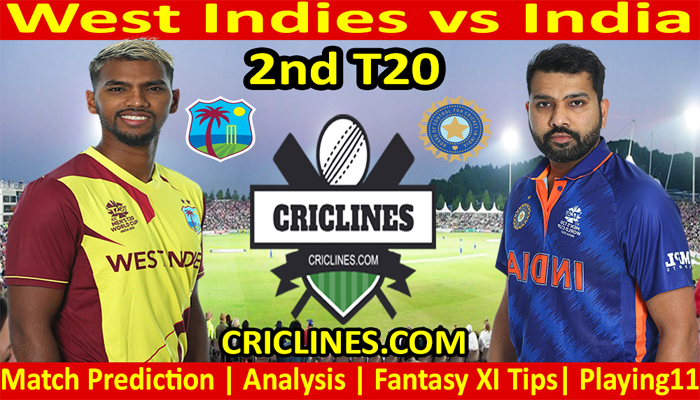 The cricket fans are ready to witness yet another big battle of T20 cricket. The 2nd T20 match of the India tour of West Indies, 2022 is scheduled to be held on Monday, 1st August 2022 at Warner Park, Basseterre, St Kitts. We are providing 100 safe, perfect, and accurate today match prediction of West Indies and India.

India had a massive victory against West Indies after having a clean sweep in the ODI series. This was the 12th win of India in the previous 13 matches under the captaincy of Rohit Sharma. He had taken Indian cricket to its peak. He has a combination of young and senior players on the team. West Indies did well in the first match but they were on the losing side. We think they miss judging the pitch in the first match. Warner Park, Basseterre is another high-scoring venue and we are sure that this match will also be the highest scoring.

West Indies played the first T20 match with just one spinner and this decision did not work properly as slow bowlers paid the price of it. They leaked 190 runs in 20 overs. Remember that the bowlers of West Indies were good in the first four overs but after that, they leaked plenty of runs. Obed McCoy, Jason Holder, Akeal Hosein, Alzarri Joseph, Odean Smith, and Keemo Paul were used as bowlers in the first match. Akeal Hossain was the only bowler who stopped the batters of India from scoring the runs. He was charged for just 14 runs in four overs and picked one wicket. Alzarri Joseph was the highest run-scorer but the leaked a lot of runs. He picked two wickets while he was charged for 46 runs in four overs. Jason Holder proved the most expensive bowler with just one wicket to his name in four overs against 50 runs.

Obed McCoy and Keemo Paul picked one wicket each while Odean Smith leaked 18 runs in two overs and failed to pick any wicket. The batting order of West Indies is very dangerous at least on papers but they were not good in the first match. They could manage to score just 122 runs while chasing the target of 191 runs. Shamarh Brooks was the highest run-scorer with just 20 runs to his name. The skipper, Nicholas Pooran could manage to score 18 runs. Kyle Mayers looked dangerous in the early balls he faced but he got out early after scoring just 15 runs on six balls with the help of two boundaries and one huge six. Rovman Powell and Shimron Hetmyer scored 14 runs each while Keemo Paul remained not out after scoring 19 runs.

India wants to try some different things in this series and we also saw this in the first match. They gave a chance to struggling Iyer while Deepak Hooda was dropped in the first match who is in good form. India is making these moves to get the best possible playing eleven for the upcoming T20 World Cup. The batting order of India is playing with an attacking strategy and this is working properly. They scored 190 runs in 20 overs in the first match. The skipper, Rohit Sharma was the highest run-scorer with 64 runs to his name on 44 balls with the help of seven boundaries and two huge sixes. D Karthik was the other batter who was just good with the bat. He scored 41 runs on just 19 balls. He smashed four boundaries and two huge sixes during his inning.

India has a decent batting order with Rohit Sharma, Rishabh Pant, SKY, Jadeja, and Karthik available to lead. We think that India will play with the same batters in this match. The bowling department of India is also doing well on this tour of the West Indies. They played with three spin bowlers in the opening match. The conditions in St. Kitts are different and we think that Harshal Patel and Avesh Khan will come back in the final playing eleven for this match. We also think that Arshdeep Singh will also play this match as he was good in the previous match and picked two wickets in four overs against just 24 runs. Ravichandran Ashwin and Ravi Bishnoi also picked two wickets each in the previous match. Ravindra Jadeja and Bhuvneshwar Kumar picked one wicket each.

West Indies had played a total of 164 T20 matches so far. They won 70 matches while other teams won 84 matches. Their 10 matches ended with no result.

India had played 170 T20 International matches right now with 111 wins to their name. They had lost 54 matches while their 5 matches ended with no result.

West Indies had played 21 T20 matches against India where they won 6 while India had won 14 matches and one match between these two teams ended with no result.

India has a strong batting order and bowling unit as compared to India and they also had won the first match, so the winning chances of India for today match have been increased. The equation of winning chances of both teams for today’s match is mentioned as under.

The 2nd T20 match between West Indies and India is going to be played at Warner Park, Basseterre, St Kitts. The pitch at this stadium is excellent for batting. The boundaries at this venue are short and will bring the spinners into play. The pitch will continue to be good for batting throughout the match. A total of 280 can be a good total to defend.

The weather forecast in St Kitts on match day is not very good for a cricket match. There are some chances of rain but and that is possible that we may have an interrupted match.

Who Will Win West Indies vs India 2nd T20

Who Will Win West Indies vs India 2nd T20 Match-WI

The above-mentioned match prediction of West Indies vs India is based on our research, understanding, and analysis. You can consider the point we had provided you and finally, the decision will be yours that you have to make at your own risk.