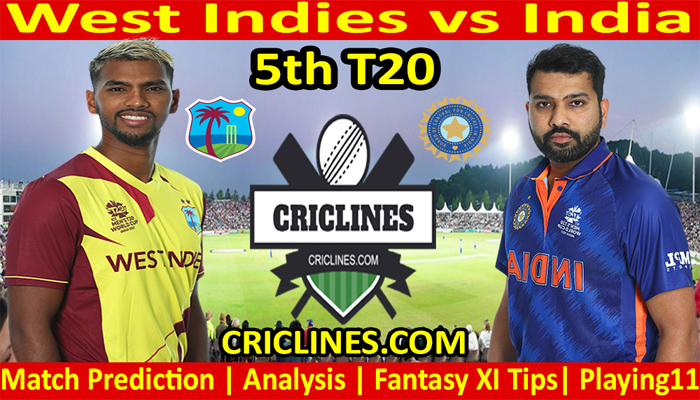 The world is ready to witness yet another big battle of T20 cricket. The 5th T20 match of the India tour of West Indies, 2022 is scheduled to be held on Sunday, 7th August 2022 at Central Broward Regional Park Stadium Turf Ground, Lauderhill, Florida. We are providing 100 safe, perfect, and accurate today match prediction of the West Indies and India.

India had finally won this series of five matches with 3-1 against West Indies after winning the fourth T20 match with a handsome margin of 59 runs. Now, team India will relax and we are sure that they will give a chance to some new players in the bench strength. On the other side, West Indies had totally failed to give the best performance in this home series against India. They had lost the ODI and T20 series.

West Indies failed to perform well in almost each and every department of the game in the previous match. Their bowling unit failed to perform well and leaked 191 runs in 20 overs. Akeal Hosein, Dominic Drakes, Obed McCoy, Alzarri Joseph, and Jason Holder were handling the bowling department of West Indies. Alzarri Joseph was the only successful bowler with two wickets to his name. Obed McCoy also picked two wickets but he leaked a lot of runs. He was charged for 66 runs in four overs.

Akeal Hosein picked one wicket while Jason Holder and Dominic Drakes were the bowlers who failed to pick any wicket. The batting order of West Indies also failed to give the best performance in the previous match. They could manage to score just 132 runs and their full team came back to the pavilion in 19.1 overs while chasing the target of 192 runs. Rovman Powell and Nicholas Pooran scored 24 runs each while Shimron Hetmyer had 19 runs to his name.

The way how India performed in the previous match was just outstanding. They scored 191 runs in their inning of 20 overs. Almost all batters from their side put some runs on the board. Rishabh Pant scored was the highest run-scorer with 44 runs to his name on 31 balls with the help of six boundaries. The skipper, Rohit Sharma also performed well and scored 33 runs. He faced 16 balls and smashed three boundaries and two huge sixes during his inning. Sanju Samson was the other batter who was good with the bat. He scored 30 runs and remained not out till 20 overs.

The bowling department of India also performed well and leaked 132 runs while defending the target of 192 runs. They used six bowlers including Bhuvneshwar Kumar, Avesh Khan, Axar Patel, Arshdeep Singh, Ravi Bishnoi, and Deepak Hooda. Arshdeep Singh was the most successful bowler in the previous match with three wickets to his name in 3.1 overs against 12 runs. Ravi Bishnoi, Axar Patel, and Avesh Khan picked two wickets each while Bhuvneshwar Kumar and Deepak Hooda failed to pick any wicket.

West Indies had played a total of 167 T20 matches so far. They won 71 matches while other teams won 86 matches. Their 10 matches ended with no result.

India had played 173 T20 International matches right now with 113 wins to their name. They had lost 55 matches while their 5 matches ended with no result.

West Indies had played 24 T20 matches against India where they won 7 while India had won 12 matches and one match between these two teams ended with no result.

India has a strong batting order and bowling unit as compared to India and they also had won the first match, so the winning chances of India for today match have been increased. The equation of winning chances of both teams for today’s match is mentioned as under.

The 5th T20 match between West Indies and India is going to be played at Central Broward Regional Park Stadium Turf Ground, Lauderhill, Florida. The pitch at this stadium is excellent for batting. The boundaries at this venue are short and will bring the spinners into play. The pitch will continue to be good for batting throughout the match. A total of 280 can be a good total to defend.

The weather forecast in Florida on match day is not very good for a cricket match. There are some chances of rain but that is possible that we may have an interrupted match.

Who Will Win West Indies vs India 5th T20

Who Will Win West Indies vs India 5th T20 Match-IND

The above-mentioned cricket match prediction of West Indies vs India is based on our research, understanding, and analysis. You can consider the point we had provided you and finally, the decision will be yours that you have to make at your own risk.