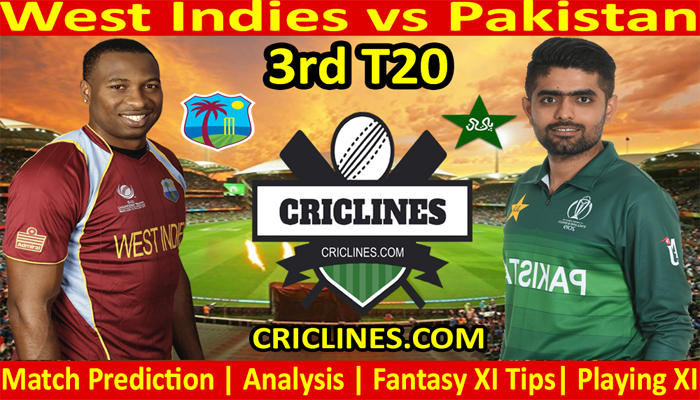 Pakistan had won the 1st completed match and now they are leading the series. If they could manage to win this match also, they will also win this series of three T20 matches. The previous match was easy for West Indies to win but the slow pitch destroyed their dreams and in the end, they were seven runs short.

The world is ready to witness yet another big battle of T20 cricket. The 3rd T20 match of Pakistan tour of West Indies, 2021 is scheduled to be held on Sunday, 1st August 2021 at Providence Stadium, Guyana. We are providing 100 safe, perfect, and accurate today match prediction for all matches of West Indies and Pakistan.

West Indies had played a lot of cricket in recent times and as we mentioned in the prediction of the previous match, they gave a tough time to Australia but in this series, slow pitch is disturbing the batting order of West Indies. West Indies gave rest some of its key players like Obed McCoy, Andre Russell, and Fabian Allen. We are sure that these players will the part of the playing eleven for in this match.

The bowlers of West Indies were struggling till the 16th over but when the match was resumed after the rain, they bounced back strongly and restrict the batting order of Pakistan under 160 runs. Jason Holder picked four while DJ Bravo had two wickets to his name. Nicholas Pooran was the most successful batter from the West Indies side who scored 62 runs on just 33 deliveries with the help of four boundaries and six huge sixes.

The start of the batting order of Pakistan was just outstanding in the previous match and many of us were hoping that they will score near about 180 runs but rain destroyed their plans and they could manage to score 157 runs. The middle batting order of Pakistan totally failed to put some big runs on the board. The skipper, Babar Azam was the highest run-scorer with 51 runs to his name. Mohammad Rizwan scored 46 runs and Sharjeel Khan could manage to score 20 runs.

The performance of the bowling department of Pakistan was just outstanding in the previous match. They defended a low target of 158 runs against one of the strongest batting orders in the world. Mohammad Hafeez was the most successful bowler who picked one wicket in his four overs bowled out against just six runs. This is his career-best bowling figure. Shaheen Afridi, Hasan Ali, and Mohammad Wasim Jr picked one wicket each in the previous match.

West Indies had played a total of 142 T20 matches with 62 wins to their name. They had lost 71 matches while their 7 matches were ended with no result.

Pakistan had played 175 T20 Internationals. They had won 107 matches and lost 65 matches. Their 3 matches ended with no results.

West Indies had faced Pakistan in 16 T20 matches where they won 3 while Pakistan won 12 matches. One match between these two teams was ended with no result.

The 3rd T20 match between West Indies and Pakistan is going to be played at Providence Stadium, Guyana. The pitch at this stadium is excellent for batting. The boundaries at this venue are short and will bring the spinners into play. The pitch will continue to be good for batting throughout the match.

The weather forecast in Guyana on match day is not very good. There are some chances of rain but and that is possible that we may have an interrupted match.

Babar Azam is in superb form and while Hasan Ali has a good record while playing in West Indies. Saqib Mehmood had performed well in the T20 series from West Indies. Jonny Bairstow is also in superb form. These players will be key to watch in this match.

Who Will Win West Indies vs Pakistan 3rd T20

Who Will Win West Indies vs Pakistan 3rd T20 Toss-WI

Who Will Win West Indies vs Pakistan 3rd T20 Match-PAK

Dream11 prediction for West Indies vs Pakistan. After checking the latest player’s availability, the Dream 11 Team for this match of West Indies and Pakistan is mentioned under.

Q. Who will win this match?

Q. Who will win the toss today?