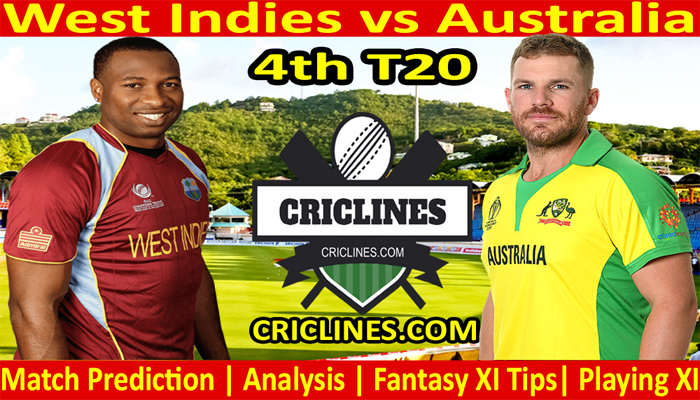 The world is ready to witness yet another big battle of T20 cricket. The 4th T20 match of Australia tour of West Indies, 2021 is scheduled to be held on Wednesday, 14th July 2021 at Daren Sammy National Cricket Stadium, Gros Islet, St Lucia. We are providing 100 safe, perfect, and accurate today match prediction for all matches of West Indies and Australia.

West Indies had won the T20 series of five matches and are in a good position to have a whitewash against the strong team of the world, Australia. Many of us were thinking Australia is the favorite team and they will easily win this series but they had totally failed and now have a threat of white was if they don’t improve their performance.

West Indies had been just outstanding in this t20 series against Australia and had outclassed the strong team. They had won all three matches played earlier quite easily and also the series. The batting and bowling department of West Indies had given their 100 % performance in this series. They are defending champions in the upcoming T20 World Cup and we are sure that they will give a tough time to all other teams. They had beaten Australia in the 3rd T20 match with a handsome margin of six wickets where they lost the toss and were asked to field first. The performance of their bowling unit was just outstanding in that match. They leaked 141 runs in their inning of 20 overs. Hayden Walsh was the highest wicket-taker from their side with two wickets to his name.

Fabian Allen, DJ Bravo, and Obed McCoy picked one wicket each while Sheldon Cottrell, Andree Russell, and Chirs Gayle were the bowlers who failed to pick any wicket. The performance of the batting order of the West Indies was also superb in the previous match. They chased the target of 142 runs in 14.5 overs with six wickets in the pocket. Chris Gayle destroyed the bowling department of Australia. He was the highest run-scorer with 67 runs to his name. He faced just 38 deliveries and smashed seven sixes and four boundaries during his inning. The skipper, Nicholas Pooran also had an outstanding performance with the bat. He remained not out after scoring 32 runs. Lendl Simmons scored just 15 runs.

Australia had failed to give the performance of many cricket lovers were expecting. They had lost the all three matches played so far and also the series of five T20 matches with 3-0. The batting and bowling department of Australia had failed to give the best performance in the conditions of the West Indies. They faced a heavy defeat against West Indies in the 3rd T20 match by the margin of six wickets. They won the toss and decided to bat first. Their batting order once again failed to put a big total on the board. They scored just 141 runs in their inning of 20 overs. Henriques scored 33 runs while the skipper, Aaron Finch scored 30 runs. Ashton Turner scored 24 runs while Matthew Wade could manage to score just 23 runs.

The bowling department of Australia had totally failed in this series against West Indies and we also observed this in the previous match where they leaked the target of 142 runs in just 14.5 overs. Riley Meredith was the highest wicket-taker from their side but also leaked plenty of runs. He picked three wickets against 48 runs in his 3.5 overs. Mitchell Starc picked one wicket while no other bowler from their side could manage to pick any wicket. Josh Hazlewood, Adam Zampa, and Mitchell Marsh were the bowlers who failed to pick any wicket. Australia has to improve their performance otherwise, they are going to face a heavy whitewash against West Indies.

West Indies had played a total of 138 T20 matches so far. They won 63 matches while other teams won 69 matches. 6 matches of West Indies were ended with no result.

Australia had played 139 T20 International matches right now with 71 wins to their name while they had lost 65 matches and their three matches were ended with no result.

West Indies had played 14 T20 matches against Australia where they won 9 matches while Australia had won five matches.

The 4th T20 match between West Indies and Australia is going to be played at the Daren Sammy National Cricket Stadium, Gros Islet, St Lucia. The pitch at this stadium is excellent for batting. The boundaries at this venue are short and will bring the spinners into play. The pitch will continue to be good for batting throughout the match.

Chris Gaye is back to the form and smashed seven sixes in the previous match. We are sure that he will continue this good in this match. Mitchell Marsh had improved his six-hitting capabilities in recent times. We also observed this in the 1st T20 match. He will be a key player to watch from Australia’s side while Andree Russel and Obed McCoy are key players to watch from West Indies’ side.

Who Will Win West Indies vs Australia 4th T20

Who Will Win West Indies vs Australia 4th T20 Toss-AUS

Who Will Win West Indies vs Australia 4th T20 Match-AUS

We had provided you the above-mentioned cricket match prediction on the basis of our research, understanding, and analysis. You can consider the point we had provided to you and in the end, the final decision will be yours.