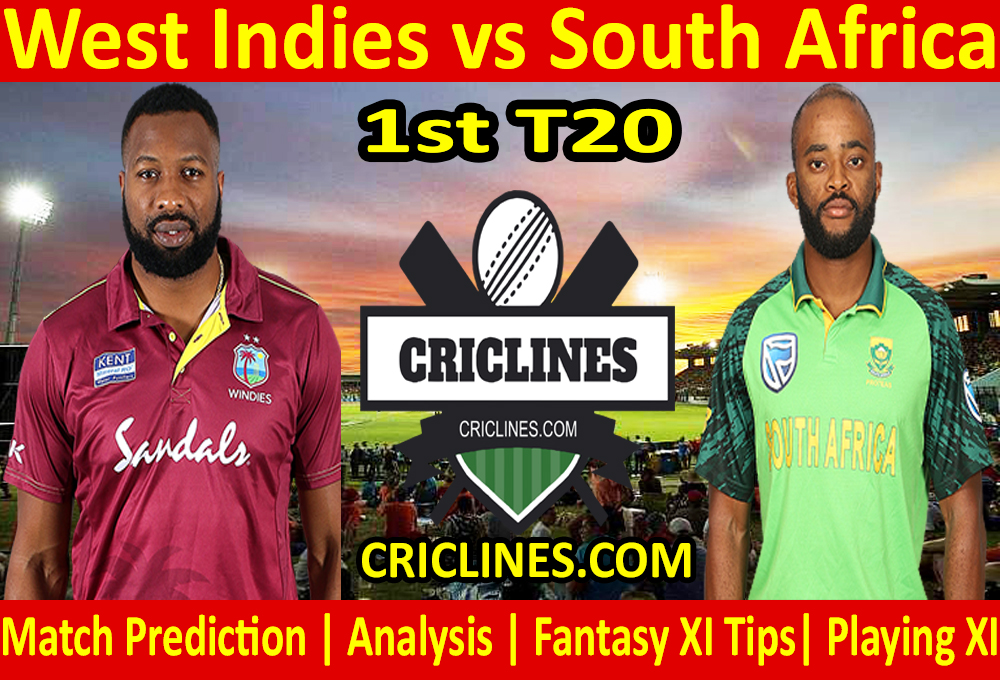 The world is ready to witness yet another big battle of T20 cricket. The 1st T20 match of South Africa tour of West Indies, 2021 is scheduled to be held on Saturday, 26th June 2021 at National Cricket Stadium, St George’s, Grenada. We are providing 100 safe, perfect, and accurate today match prediction for all matches of West Indies and South Africa.

West Indies had lost the test series and now they are going to face South Africa in the series of five t20 matches. T20 format of cricket is the strongest part of West Indies. This is the format where West Indies is much stronger and powerful. You should remember that West Indies is champions of T20 format and West Indies is the only country whose players take part in almost each and every t20 league played around the world. Kieron Pollard had the leading the t20 cricket team of the West Indies and he had been proved the most successful captain. He had won many matches played under his captaincy for his country.

Evin Lewis and Andre Fletcher or Lendl Simmons will open the batting inning of West Indies while Chris Gayle is set to bat at number three. Gayle had performed well in the recent season of IPL for his team Punjab Kings. Shimron Hetmyer, Nicholas Pooran, and Kieron Pollard will be handling the middle. Fabian Allen, Jason Holder, and Andre Russell are the all-rounders in the squad of West Indies which is the key reason why the batting order of this team is more strong and powerful. Hayden Walsh, Sheldon Cottrell, and Dwayne Bravo will be handling the bowling department of this team.

Temba Bavuma had been picked as a new leader of South Africa’s t20 team which is not a good decision in our opinion. He is a good player but he does not fit as a captain in the South African team. The batting order of South Africa is strong and experienced overall. Quinton de Kock is in the superb form of his life and scored runs in the Test series against West Indies. He will be opening the batting inning in this match with Reeza Hendricks or Aiden Markram.

The middle batting order of South Africa is strong and dangerous. Temba Bavuma, David Miller, and Rassie van der Dussen will be batting in the middle overs. This match will be a test for the bowling unit of South Africa and it will be interesting to see how the bowlers of South Africa performs against the strong and dangerous batting order of West Indies. Lungi Ngidi, Anrich Nortje, Kagiso Rabada will have to use their full skills. Tabraiz Shamsi can be dangerous against West Indies while we are also expecting good performances by Phehlukwayo and Dwaine Pretorius

West Indies had played a total of 130 T20 matches so far. They won 58 matches while other teams won 66 matches. 6 matches of West Indies were ended with no result.

South Africa had played 131 T20 International matches right now with 73 wins to their name while they had lost 57 matches and their one match was ended with no result.

West Indies had played 10 T20 matches against South Africa where they won 4 matches while South Africa had won six matches.

The 1st T20 match between West Indies and South Africa is going to be played at the National Cricket Stadium, St George’s, Grenada. The pitch at this stadium is excellent for batting. The boundaries at this venue are short and will bring the spinners into play. The pitch will continue to be good for batting throughout the match.

Who Will Win West Indies vs South Africa 1st T20