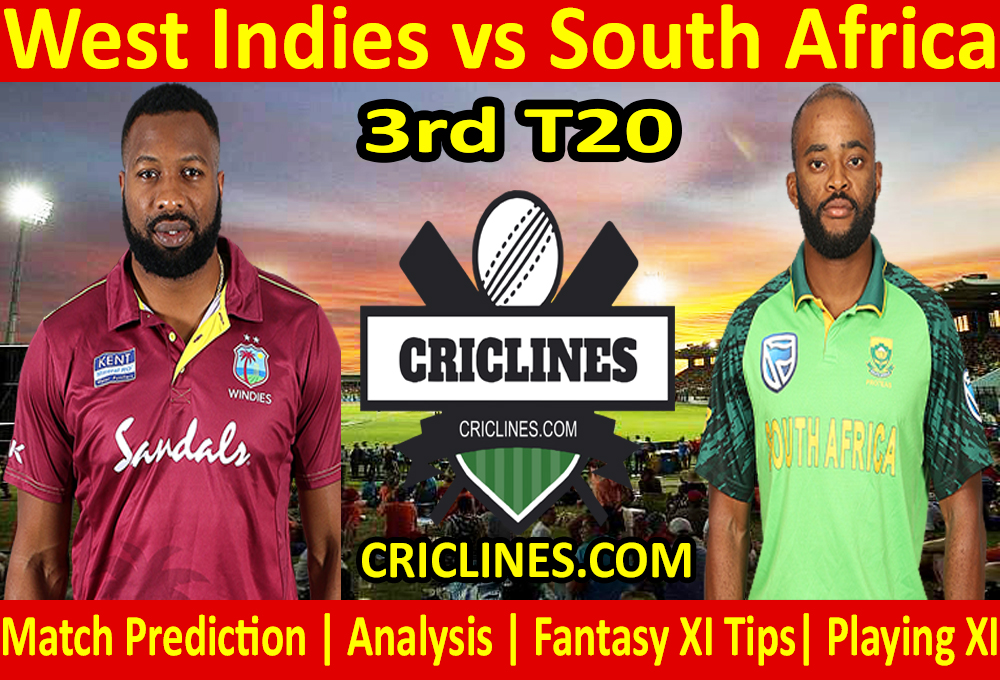 The world is ready to witness yet another big battle of T20 cricket. The 3rd T20 match of South Africa tour of West Indies, 2021 is scheduled to be held on Tuesday, 29th June 2021 at National Cricket Stadium, St George’s, Grenada. We are providing 100 safe, perfect, and accurate today match prediction for all matches of West Indies and South Africa.

West Indies won the 1st T20 match but were beaten in the second match against South Africa by the margin of 16 runs. Now, the series of five t20 matches is leveled with 1-1. They won the toss and decided to field first. The performance of their bowling unit was good as they leaked 166 runs in their inning of 20 overs on a pitch that was in much favor of the batting. Obed McCoy was the most successful and highest run-scorer from their side who picked three wickets in his four overs bowled out while he was charged for 25 runs. Kevin Sinclair picked one wicket while Jason Holder and Andree Russel picked one wicket each. Fabian Allen and DJ Bravo were the bowlers who failed to pick any wicket.

West Indies lost the previous match due to the worst performance by their batting order. We have no doubt that they are a strong batting lineup but they failed to give the best performance in the previous match. They could manage to score 150 runs while chasing the target of 167 runs. Andre Fletcher was the most successful and highest run-scorer from their side who scored 35 runs on 36 deliveries with the help of two boundaries and one huge six. Fabian Allen scored 34 runs while Evin Lewis could manage to score 21 runs. Chris Gayle, Nicholas Pooran, Andree Russel, and the skipper, Kieron Pollard failed to put some big runs on the board.

South Africa finally won the previous match after facing a heavy defeat against West Indies in the first match by the margin of eight wickets. The performance of the batting order of this team was good in the previous match. They scored 166 runs in their inning of 20 overs. The skipper, Temba Bavuma was the highest run-scorer from their side who smashed the inning of 46 runs on 33 deliveries with the help of five boundaries and one huge six. Reeza Hendricks was the other batsman from their side who put some runs on the board. He scored 42 runs and smashed one huge six and five boundaries during his inning.

Quinton de Kock scored 26 runs while David Miller could manage to score 11 runs. The way how the bowling unit of South Africa performed in the previous match was just outstanding. They defended the target of 167 runs and leaked 150 runs in their inning of 20 overs. Kagiso Rabada was the highest run-scorer from their side who picked three wickets in his four overs bowled out against 35 runs. George Linde also performed well with the ball. He picked two wickets in four overs bowed out while he was charged for 19 runs. Lungi Ngidi, Anrich Nortje, and Tabraiz Shamsi picked one wicket each. Tabraiz Shamsi was the most economical bowler who leaked just 16 runs in his four overs bowled out.

West Indies had played a total of 132 T20 matches so far. They won 59 matches while other teams won 67 matches. 6 matches of West Indies were ended with no result.

South Africa had played 133 T20 International matches right now with 74 wins to their name while they had lost 58 matches and their one match was ended with no result.

West Indies had played 12 T20 matches against South Africa where they won 5 matches while South Africa had won seven matches.

The 3rd T20 match between West Indies and South Africa is going to be played at the National Cricket Stadium, St George’s, Grenada. The pitch at this stadium is excellent for batting. The boundaries at this venue are short and will bring the spinners into play. The pitch will continue to be good for batting throughout the match.

Who Will Win West Indies vs South Africa 3rd T20