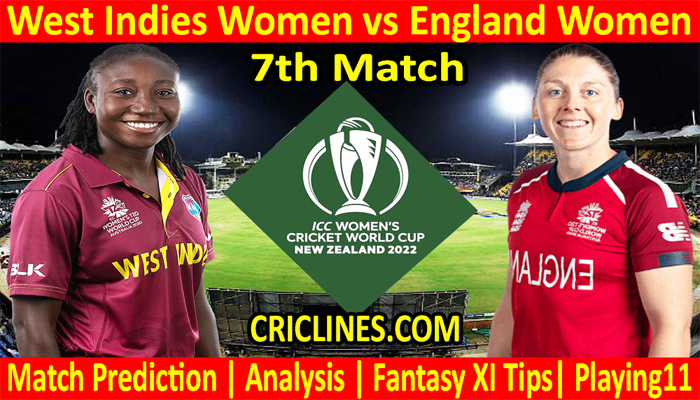 The cricket fans are ready to witness yet another big battle of Women’s ODI cricket. The 7th match of Women’s World Cup 2022 is scheduled to play between West Indies Women and England Women on Wednesday, 9th March 2022 at University Oval, Dunedin. We are posting safe, accurate, and secure today match prediction of world cup free.

West Indies lost the toss and were asked to bat first in their opening match. The way how their batting order performed in the previous match was just outstanding. They scored 259 runs in their inning of 50 overs. Hayley Matthews was the most successful and highest run-scorer from their side who scored 119 runs on 128 deliveries with the help of 16 boundaries and one huge six. Chedean Nation scored 36 runs while S Taylor scored 30 runs.

The bowling unit of West Indies failed to give the best performance in the previous match but they defended the target of 260 runs and leaked 256 runs in their inning of 50 overs. Deandra Dottin was the most successful bowler from their side who picked two wickets in her 0.5 overs bowled out against just two runs. Anisa Mohammed and Hayley Matthews also picked two wickets each.

The first match of England Women against Australia was a high-scoring match. The performance of their bowling unit was not impressive. They leaked 310 runs in their inning of 50 overs. N Sciver was the most successful and highest wicket-taker from their side who picked two wickets in her 10 overs bowled out against 10 overs. K Brunt picked one wicket while A Shrubsole, Kate Cross, and Ecclestone were the bowlers who failed to pick any wicket.

The batting order England performed well but they could manage to score 298 runs while chasing the target of 311 runs. Natalie Sciver was the most successful and highest run-scorer from their side who scored 109 runs on just 85 deliveries with the help of 13 boundaries. Tammy Beaumont also performed well and scored 74 runs while Heather Knight has 40 runs to her name.

The 7th match of Women’s ODI World Cup 2022 will be played at University Oval, Dunedin. The pitch here at this stadium has something in it for both batsmen and bowlers. It is typically a little slow and low but very flat. The pace bowlers have very little to work with and it is the slower bowlers that will be the bigger threat.

The weather forecast in Dunedin is predicting some chances of rain on the matchday but hopefully, it should clear up by the time the match gets started.

Check out the Dream11 lineup for the 20th Women’s ODI World Cup match to be played between West Indies Women vs England Women.