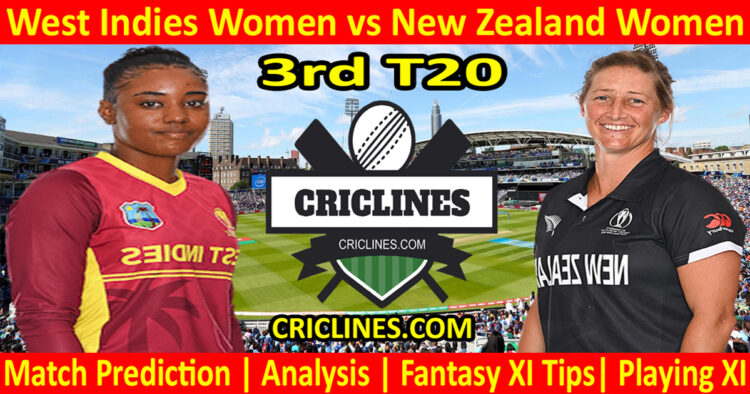 The world is ready to witness yet another big battle of women’s T20 cricket. The 3rd T20 match of the New Zealand Women’s tour of West Indies, 2022 is scheduled to be held on Sunday, 2nd September 2022 at Sir Vivian Richards Stadium, North Sound, Antigua. We are providing 100 safe, perfect, and accurate today match prediction for all matches of West Indies Women and New Zealand Women.

The first T20 match of this five matches series between New Zealand Women and West Indies Women was very interesting where West Indies won with a margin of just one run but New Zealand bounced back strongly and won the next match with a handsome margin of six wickets.

West Indies Women have a strong batting order in the side but they had totally failed to give the best performance in this home series against New Zealand. They could manage to score just 107 runs in 20 overs in the previous match. K Knight was the most successful and highest run-scorer from their side who scored 42 runs on 48 balls with the help of five boundaries. Chinelle Henry was the other batter who put some runs on the board. She scored 24 runs while Aaliyah Alleyne scored just 13 runs.

The bowling unit of West Indies was good in the first match but they failed to give the best performance in the previous match. They could not defend a low target on the board and leaked the target of 108 runs in 19.5 overs. Cherry Ann Fraser was the most successful bowler from their side who picked one wicket in 2.5 overs and bowled out against 13 runs. Shakera Selman and Karishma Ramharack also picked one wicket each while Chinelle Henry, Afy Fletcher, and the skipper, Hayley Matthews were the bowlers who could not manage to pick any wicket.

New Zealand Women once again performed well in the previous match especially the bowling unit of New Zealand was just outstanding where they leaked 107 runs in 20 overs. Hayley Jensen was the most successful and highest wicket-taker from their side who picked three wickets in four overs against just 24 runs. Eden Carson was the other bowler who destroyed the batting order of the West Indies. She picked two wickets in four overs while she was charged for just 13 runs. Fran Jonas, Hannah Rowe, Amelia Kerr, and S Devine failed to pick any wicket.

The batting order of New Zealand had been struggling in both matches. They chased the target of 108 runs in 19.5 overs and they lost five four wickets. Suzie Bates was the most successful and highest run-scorer from their side who scored 54 runs on 61 balls with the help of six boundaries. Amelia Kerr was the other batter who put some runs on the board. She scored 21 runs while no other batter from the side of New Zealand could even enter into the double figure. They need to give the best performance to win the remaining matches.

The 3rd T20 match between West Indies Women and New Zealand Women is going to be played at Sir Vivian Richards Stadium, North Sound, Antigua. The pitch at this stadium is excellent for batting. The boundaries at this venue are short and will bring the spinners into play. The pitch will continue to be good for batting throughout the match.