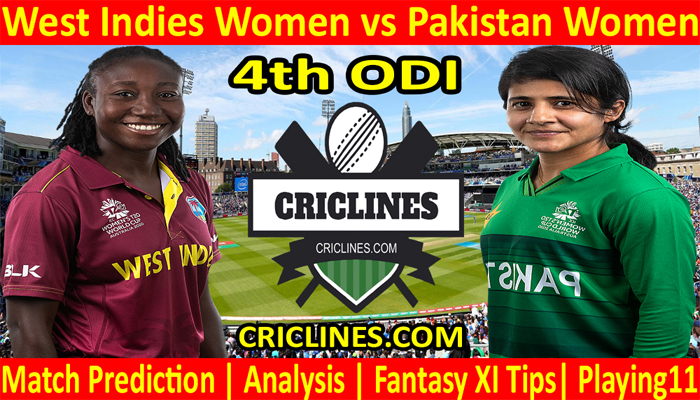 The cricket fans are ready to witness yet another big battle of Women’s ODI cricket. The 4th ODI match of the Pakistan Women tour of West Indies, 2021 is scheduled to be held on Thursday, 15th July 2021 at Sir Vivian Richards Stadium, North Sound, Antigua. We are providing 100 safe, perfect, and accurate today match prediction for all matches of West Indies Women and Pakistan Women.

West Indies Women had won all three matches played so far and also the series of five ODI matches with 3-0. They are in a good position to have a whitewash against the Pakistan Women team in this series. They had won the precious ODI match with a handsome margin of eight wickets where they won the toss and decided to field first. The performance of their bowling department was outstanding. They leaked 182 runs and send the all-team of Pakistan women back to the pavilion in 49 overs. A Mohammed was the most successful bowler from their side who picked three wickets in her 10 overs bowled out against just 25 runs.

Chinelle Henry also picked three wickets while she leaked 37 runs in her eight overs bowled out. Hayley Matthews picked two wickets while S Selman and K Ramharack picked one wicket each. The batting order of the West Indies women team also performed well in the previous match. They chased the target of 183 runs in just 40.1 overs. Hayley Matthews was the most successful and highest run-scorer from their side who scored 100 runs and remained not out till the chase of the target. She faced 121 balls and smashed 11 boundaries during her inning. Britney Cooper scored 45 runs with the help of three boundaries.

Pakistan Women had failed totally failed in this tour of the West Indies. They had lost T20 and ODI Series. They faced whitewash in the T20 series and now have a threat of whitewash in the ODI series. They lost the previous match against West Indies by the margin of eight wickets. They lost the toss and were asked to bat first. The batting order of Pakistan once again failed to put a big total on the board. They were all out after scoring 182 runs in 49 overs. Omaima Sohail was the highest run-scorer with 62 runs to her name. She faced 79 balls and smashed seven boundaries during her inning.

Muneeba Ali scored 25 runs while Nida Dar could manage to score 24 runs. The bowling department of the Pakistan Women team also failed to give the best performance. They leaked the target of 183 runs in 40.1 overs. Fatima Sana and Anam Amin picked one wicket each. No other bowler from the Pakistan side could manage to pick any wicket. Diana Baig, Nida Dar, Rameen Shamim, and Omaima Sohail were the bowler who failed to pick any wicket.

The 4th ODI match between West Indies Women and Pakistan Women is going to be played at Sir Vivian Richards Stadium, North Sound, Antigua. The pitch at this stadium is excellent for batting. The boundaries at this venue are short and will bring the spinners into play. The pitch will continue to be good for batting throughout the match. As per the live cricket score, a total of 270 runs should be a par score on this pitch.

The weather forecast in Antigua on match day is not very good. There are some chances of rain but and that is possible that we may have an interrupted match.