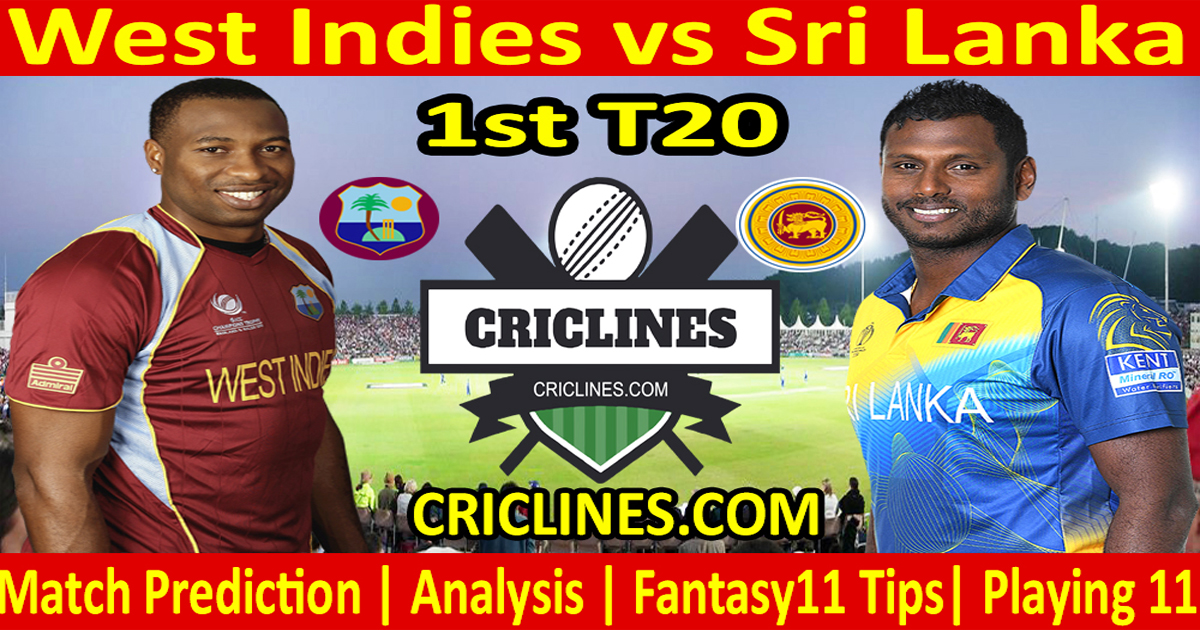 The cricket fans are ready to witness yet another big battle of T20 cricket. The 1st T20 match of Sri Lanka tour of West Indies, 2021 is scheduled to be held on Wednesday, 3rd March 2021 at Coolidge Cricket Ground, Antigua. We are posting 100 safe, perfect, and accurate today match prediction for all matches of West Indies and Sri Lanka.

We know that West Indies is a strong team when it comes to the T20 format of cricket. This country had produced hard-hitter of the ball. Kieron Pollard is going to lead this team during this home series against Sri Lanka. Kieron Pollard had a lot of opportunities to play t20 leagues but he preferred to play for his country. The batting order of the West Indies is strong. Lendl Simmons and Evin Lewis will be opening the inning and Chris Gayle will be batting at number three. Gayle had got his form back as we saw him in some opening matches of the Pakistan Super League.

Sri Lanka had faced some problems right before this tour of the West Indies. They lost their bowling coach just after the two days of his appointment. Their captain did not come with the team as he lost his passport. They had not found the leader of yet. We are hoping that Angelo Matthews is going to lead the Lankan side for this series of t20s after the absence of Dasun Shanaka. Pathum Nissanka and Ramesh Mendis will be making their debut in international cricket during this series.

Dinesh Chandimal, Niroshan Dickwella, Thisara Perera, Diumuth Karunaratne, Oshada Fernando, Danushka Gunathilaka, and Angelo Mathews will be part of the final playing eleven for this match. Some best sping bowlers are also in the squad of Sri Lanka like Wanindu Hasaranga and Lakshan Sandakan. They can bowl well against the strong batting order of the West Indies. Akila Dananjaya, Suranga Lakmal and Dushmanth Chameera are the key bowlers from Sri Lanka.

West Indies had played a total of 127 T20 matches where they won 56 matches and opposing teams won 60 matches. Their six matches were ended with no result.

Sri Lanka had played a total of 128 T20 International matches so far. They won 60 while other teams won 66 matches. The two matches of Sri Lanka were ended with no result.

The 1st T20 match between West Indies and Sri Lanka is going to be played at Coolidge Cricket Ground, Antigua. This is one of the biggest venues in the West Indies in terms of crowd capacity. The pitch on this venue is good for batting. It also has a bit of help for the spin bowlers. As per the cricket prediction, a total of 190 runs should be a par score.

Who Will Win West Indies vs Sri Lanka 1st T20