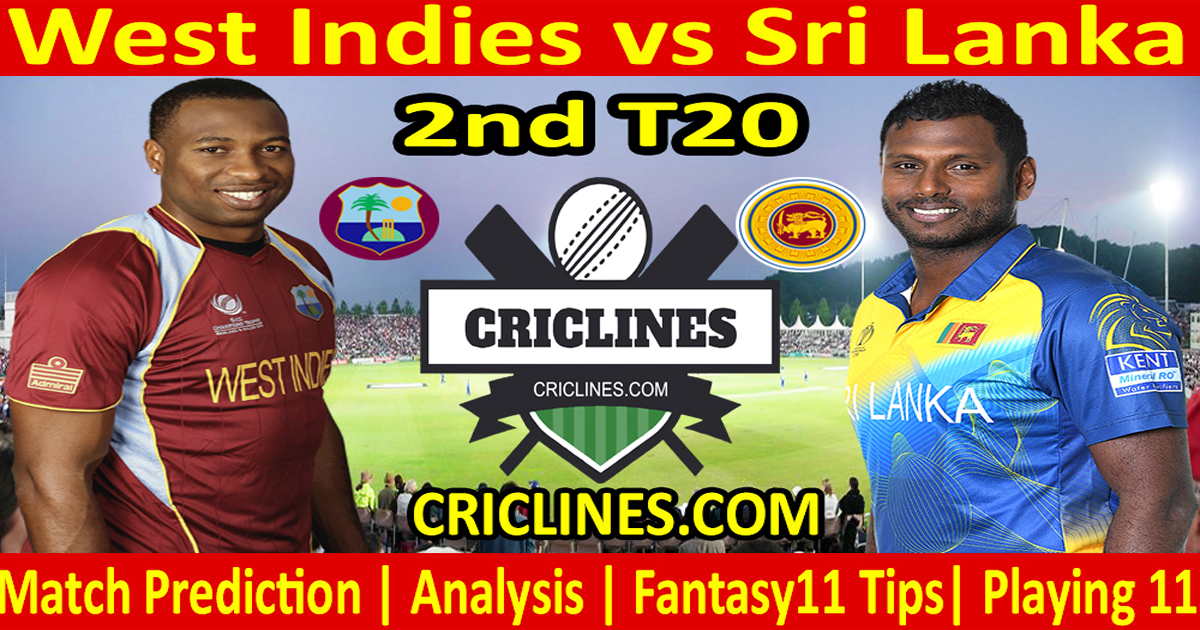 The world is ready to witness yet another big battle of T20 cricket. The 2nd T20 match of the Sri Lanka tour of West Indies, 2021 is scheduled to be held on Friday, 5th March 2021 at Coolidge Cricket Ground, Antigua. We are posting 100 safe, perfect, and accurate today match prediction for all matches of West Indies and Sri Lanka.

West Indies had a superb start to this home series against Sri Lanka and won the opening match with a handsome margin of four wickets. The way how their bowling unit performed in that match was just outstanding. They leaked just 131 runs in their inning of 20 overs. Obed McCoy was the most successful bowler from their side who picked two wickets in his four overs bowled out against 25 runs. Kevin Sinclair, F Edwards, Jason Holder, DJ Bravo, and Fabian Allen picked one wicket each.

Like the bowling, the batting order of the West Indies also performed well in the opening match against Sri Lanka. The skipper, Kieron Pollard was the highest run-scorer from their side who scored 38 runs on just 11 deliveries with the help of six sixes which he smashed in the overs. Evin Lewis also performed well with the bat. He scored 28 runs while Lendl Simmons scored 26 runs. Jason Holder remained not out after scoring 29 runs while Chris Gayle, Nicholas Pooran, and Fabian Allen failed to open the account on the scoreboard.

Sri Lanka failed to have a good start to this tour of the West Indies and lost the opening match due to the worst performance by their batting order. They could manage to score 131 runs in their 20 overs. Pathum Nissanka was the highest run-scorer from their side who scored 39 runs on 34 deliveries with the help of four boundaries and one six. Dickwella also had an outstanding performance with the bat. He scored 33 runs while Wanindu Hasaranga had 12 runs to his name.

The bowling department of Sri Lanka performed well with the ball but they failed to defend the target of 132 runs and leaked this target in just 13.1 overs. Wanindu Hasaranga was the most successful bowler from their side who picked three wickets in his four overs bowled out against just 12 runs. Akila Dananjaya also picked three wickets. He had a hattrick but was smashed for 61 runs including six sixes in one over by K Pollard.

West Indies had played a total of 128 T20 matches where they won 57 matches and opposing teams won 60 matches. Their six matches were ended with no result.

Sri Lanka had played a total of 129 T20 International matches so far. They won 60 while other teams won 66 matches. The two matches of Sri Lanka were ended with no result.

The 2nd T20 match between West Indies and Sri Lanka is going to be played at Coolidge Cricket Ground, Antigua. This is one of the biggest venues in the West Indies in terms of crowd capacity. The pitch on this venue is good for batting. It also has a bit of help for the spin bowlers. As per the cricket match prediction, a total of 190 runs should be a par score.

Who Will Win West Indies vs Sri Lanka 2nd T20