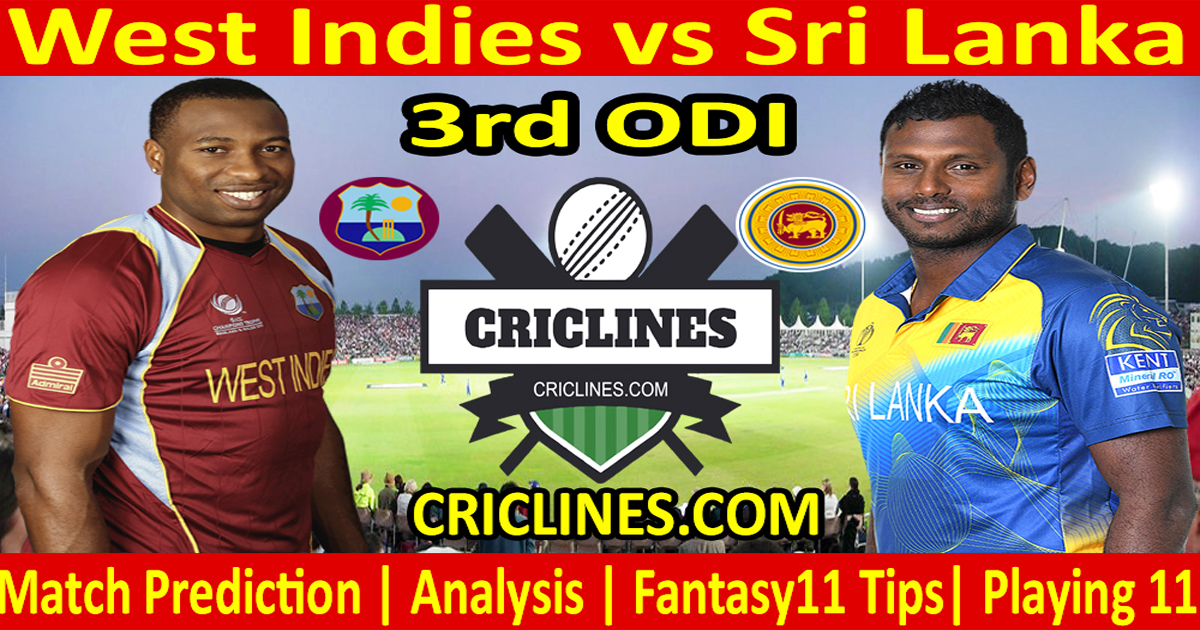 The cricket fans are ready to witness yet another big battle of ODI cricket. The 3rd ODI match of the Sri Lanka tour of West Indies, 2021 is scheduled to be held on Sunday, 14th March 2021 at Sir Vivian Richards Stadium, North Sound, Antigua. We are posting 100 safe, perfect, and accurate today match prediction for all matches of West Indies and Sri Lanka.

West Indies won the T20 series earlier and now, they had also won the ODI series against Sri Lanka with 2-0 right now. They won the second ODI match with a handsome margin of five wickets. They won the toss and decided to field first. The performance of their bowling unit was not much impressive in the previous match. They leaked 274 runs in their inning of 50 overs. Jason Mohammed was the highest wicket-taker from their side who picked three wickets in his ten overs bowled out against 47 runs. Alzarri Joseph also performed well with the ball. He picked two wickets in his 10 overs bowled out while he was charged for 42 runs. Akeal Hosein and Jason Holder picked one wicket each in the most recent match.

West Indies won the precious match due to the best performance by their batting order. They chased the target of 275 runs in 49.4 overs. Almost all batsmen from their side put some runs on the board. Evin Lewis was the most successful and highest run-scorer from their side who scored his century. He scored a total of 103 runs on 121 deliveries with the help of eight boundaries and four huge sixes. Shai Hope also had an outstanding performance with the bat. He scored 84 runs while he faced 108 deliveries and smashed six boundaries during his inning. Nicholas Pooran remained not out till the chase of the target after scoring 37 runs.

Sri Lanka totally failed to give the best performance in this tour of the West Indies. They could not perform well in the T20 series and now, they also had lost the ODI series. They have the threat of whitewash if they lose this match. The batting order of Sri Lanka performed well in the previous match. They put a total of 274 runs on the board in their inning of 50 overs. Danushka Gunathilaka was the most successful and highest run-scorer from their side who scored 96 runs while he faced 96 deliveries and smashed 10 boundaries and three sixes. Dinesh Chandimal also had an outstanding performance with the bat. He scored 71 runs while he faced 98 deliveries and smashed three boundaries and two sixes.

Wanindu Hasaranga was the other batsman from the Sri Lanka side who put some runs on the board. He scored 47 runs on just 31 deliveries with the help of two boundaries and four sixes. The performance of the bowling unit of Sri Lanka was the reason why they lost the previous match. They failed to defend the target of 275 runs and leaked this target in 49.4 overs. Thisara Perera was the most successful bowler from their side who picked two wickets in his seven overs bowled out against 47 runs. Nuwan Pradeep also picked two-wicket but he leaked plenty of runs. He was charged for 66 runs in 9.4 overs. Lakshan Sandakan picked one wicket while Dushmantha Chameera, Danushka Gunathilaka, and Wanindu Hasaranga were the bowlers who failed to pick any wicket.

West Indies had played a total of 828 ODI matches where they won 403 matches and opposing teams won 385 matches. Their 30 matches were ended with no result and 10 matches were tied.

Sri Lanka had played a total of 856 ODI International matches so far. They won 391 while other teams won 423 matches. The 37 matches of Sri Lanka were ended with no result and five matches were tied.

West Indies had faced Sri Lanka in 63 ODI matches where they won 30 and Sri Lanka won 30 matches while their three matches were ended with no result.

The 3rd ODI match between West Indies and Sri Lanka is going to be played at Sir Vivian Richards Stadium, North Sound, Antigua. This is one of the biggest venues in the West Indies in terms of crowd capacity. The pitch on this venue is good for batting. It also has a bit of help for the spin bowlers. As per the live cricket score, a total of 290 runs should be a par score.

Who Will Win West Indies vs Sri Lanka 3rd ODI