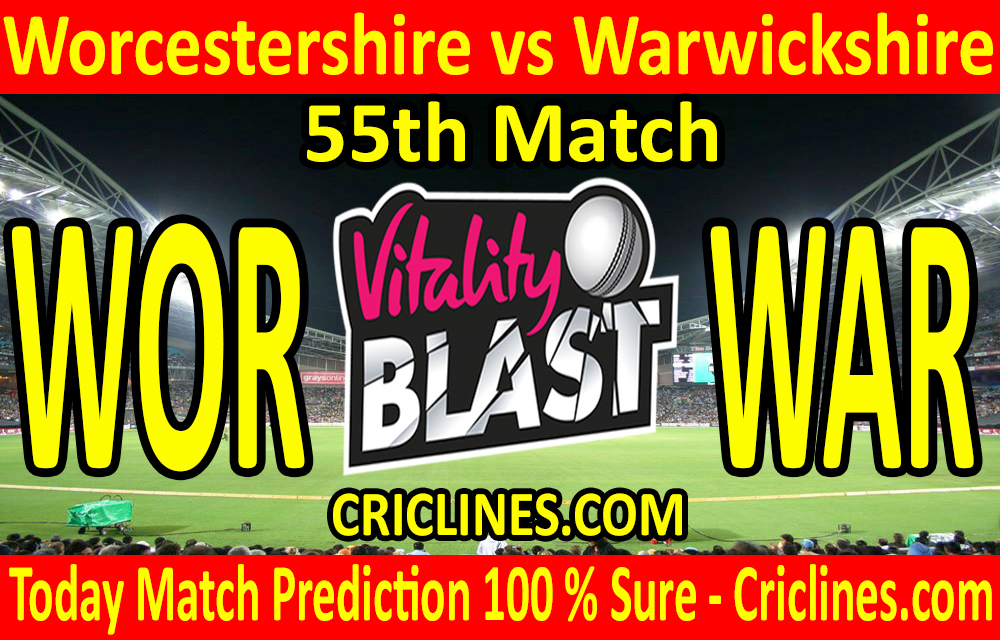 The world is ready to witness yet another big battle of Vitality T20 Blast. The 55th Match of Vitality T20 Blast 2020 is scheduled to play between Worcestershire and Warwickshire on Sunday, 13th September 2020 at New Road, Worcester. We are posting safe, accurate, and secure today match prediction for all matches of T20 Blast free.

Worcestershire had failed to give their best performance in this season of the T20 Blast. They had played a total of six matches so far with just one win to their name. They had lost four matches while their one match was ended with no result. They are laying at the bottom of the points table of the Central Group. They had beaten Somerset in their previous match with the margin of just three runs. They won the toss and decided to bat first. The performance of their batting order was average. They put a total of 168 runs in their inning of 20 overs. B Cox was the highest run-scorer from tehir side who remained not out after scoring 56 runs. Jake Libby scored 48 runs while Rutherford had 46 runs to his name.

Worcestershire won the previous match due to the best performance by their bowling unit. They defended the target of 169 runs and leaked 165 runs in their inning of 20 overs. Almost all bowlers from their side performed well in the previous match. Patrick Brown was the highest wicket-taker from their side who picked three wickets in his four overs bowled out against 39 runs. The skipper, Ed Barnard picked two wickets in his three overs bowled out while he was charged for 21 runs. Charlie Morris, Adam Finch, and Daryl Mitchell picked one wicket each while Brett D Oliveira was the only bowler from their side who failed to pick any wicket.

Warwickshire had performed well in this tournament so far. They had played a total of six matches so far with three wins to their name. They had lost two matches while their one match was ended with no result. They are holding the 3rd position on the points table of the Central Group. They won their most recent match against Glamorgan with a handsome margin of 13 runs. They won the toss and decided to bat first. Their batting order had an average performance in that match. They scored 142 runs in their inning of 20 overs. Timm van der Gugten was the highest run-scorer from their side who remained not out after scoring 34 runs. He faced 19 deliveries and smashed two boundaries and the same huge sixes. Andrew Balbirnie scored 30 runs while David Lloyd could manage to score 21 runs.

The 55th Match of Vitality T20 Blast is going to be played at New Road, Worcester. The pitch here at this stadium is expected to be flat and much favored for batting. It has a decent amount of pace and bounces in it. We may have some high scoring matches here. The pitch may also have some help in it for the seamers.

Check out the Dream11 fantasy prediction for the 55th Match of the finals day in Vitality T20 Blast, between Worcestershire and Warwickshire.