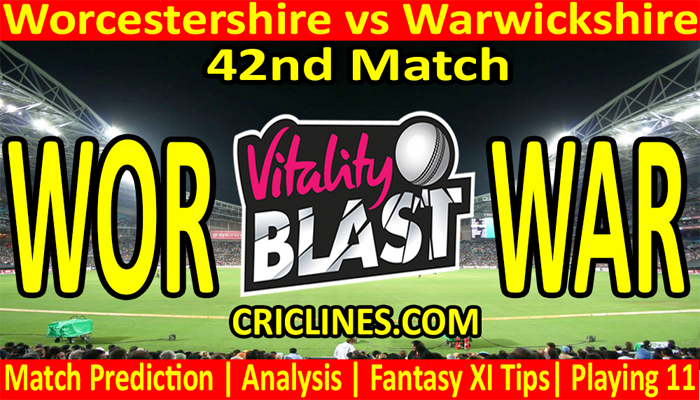 The cricket fans are ready to witness yet another big battle of Vitality T20 Blast. The 42nd Match of Vitality T20 Blast 2022 is scheduled to play between Worcestershire and Warwickshire on Friday, 3rd June 2022 at New Road, Worcester. We are posting safe, accurate, and 100 % secure today match prediction of T20 Blast free.

Worcestershire had totally failed to give the best performance in Vitality T20 Blast 2022. They are the worst-performing team of North Group. They had played four matches and are still searching for a win. They had lost all four matches played till now and are laying at bottom of the group table. On the other hand, Warwickshire had been just outstanding in this tournament. They are the un-beaten team of the North Group and had won all three matches they had played. They are situated at the second position on the points table. Warwickshire will give a tough time to WAR in this match.

Worcestershire lost their previous match against Durham by a big margin of 48 runs. The bowling department of WOR is strong and experienced but they had totally failed to perform well. We saw the same in their previous match against Durham where they leaked 186 runs in their 20th overs inning. Josh Baker, Charlie Morris, Patrick Brown, Matthew Waite, Brett DOliveira, and Barnard are leading the bowling department of Worcestershire. Brett DOliveira was the most successful bowler in the previous match with three wickets to his name in four overs against 23 runs. Patrick Brown also performed well and picked two wickets while Charlie Morris and Matthew Waite picked one wicket each. Barnard and Josh Baker were the bowlers who could not pick any wicket.

Warwickshire is a strong team overall and they had proved it. They are coming to his match on the back of a massive win over Durham with a handsome margin of five wickets. They have a strong bowling department in the side which is doing well. Bethell, Brookes, D Briggs, C Brathwaite, Craig Miles, and J Lintott are the key bowlers of WAR. They performed well in the previous match where they leaked 158 runs in 20 overs. Brookes was the most successful bowler with three wickets to his name in four overs against but he leaked a lot of runs. He was charged for 38 runs. D Briggs and Craig Miles picked two wickets each while J Lintott and C Brathwaite had one wicket each to their names.

Like the bowling, the batting order of Warwickshire is also strong and experienced. Paul Stirling and Jacob Bethell are the opening batters of this team with Robert Yates, Alex Davies, and Adam Hose available to handle the middle batting order and Chris Benjamin and Carlos Brathwaite handling the lower batting order. Chris Benjamin was the highest run-scorer in the previous match who remained not out after scoring 68 runs on just 36 balls with the help of six boundaries and four huge sixes. Carlos Brathwaite also performed well and scored 23 runs. He smashed four boundaries during his inning.

Here is the possible playing eleven of both teams for this match.

The toss will play a key role in the decision of all matches of Vitality T20 Blast. Defending is much easier in the conditions in England than chasing so according to toss prediction, the team who will win the toss will elect to bat first.

The 42nd match of Vitality T20 Blast is going to be played at New Road, Worcester. The pitch here at this stadium is expected to be flat and much favored for batting. It has a decent amount of pace and bounces in it. We may have some high-scoring matches here. The pitch may also have some help in it for the seamers.

The weather forecast for Worcester is good for a cricket match. There are some chances of rain during this match but we are hoping a full match to see without any disturbance.

Check out the Dream11 fantasy prediction for the 42nd Match of the finals day in Vitality T20 Blast, between Worcestershire and Warwickshire.