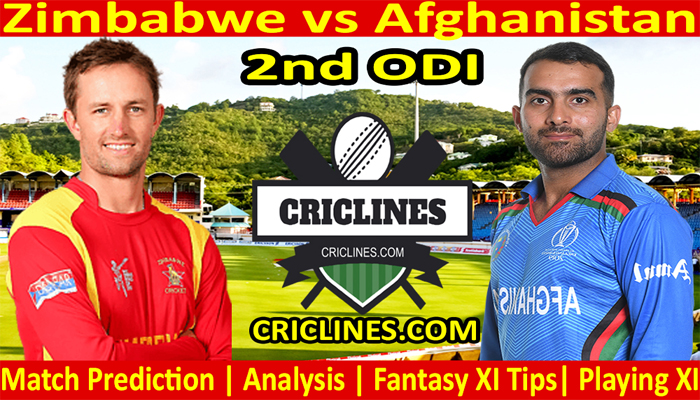 The cricket fans are ready to witness yet another big battle of ODI cricket. The 2nd ODI match of the Afghanistan tour of Zimbabwe, 2022 is scheduled to be held on Monday, 6th June 2022 at Harare Sports Club, Harare. We are providing 100 safe, perfect and accurate today match prediction of Zimbabwe and Afghanistan.

Afghanistan had a good start to this tour of Zimbabwe and had won the opening ODI with a handsome margin of 60 runs. The home side had won to win this match otherwise, they will lose the series. Afghanistan is an improved team in ODI cricket and it will be very difficult for Zimbabwe to stop this team. Zimbabwe should put its full effort into this match. Zimbabwe is the team that can win this match as many of today prediction providers are predicting this but we don’t think that it can happen.

Zimbabwe leaked plenty of runs in the first ODI and this was the main reason why they lost the match. Many of us were expecting that the bowlers of Zimbabwe will fail to perform in the home venue but this happened. They leaked 276 runs in their inning of 50 overs. Muzarabani, Chatara, Tanaka Chivanga, Tiripano, Madhevere, Ryan Burl, and Sikandar Raza are leading the bowling department of Zimbabwe. Blessing Muzarabani was the only successful bowler in the previous match who picked four wickets in nine overs against 52 runs. Tanaka Chivanga was the other bowler who had a wicket to his name. He picked one wicket while he was charged for 41 runs in seven overs.

Sikandar Raza, Ryan Burl, Wesley Madhevere, Donald Tiripano, and Tendai Chatara were the bowlers who could not pick any wicket in the previous match. The batting order of Zimbabwe also failed to give the best performance in the previous match. They could manage to score 216 runs and their full team came back to the pavilion on the last balls of their inning. Sikandar Raza was the only successful batter in the previous match with 67 runs to his name. He faced 78 balls and smashed six boundaries and one huge six during his inning. Innocent Kaia scored 39 runs while Craig Ervine could manage to score 30 runs.

Afghanistan was good in the opening match of this tour of Zimbabwe. How the batting order of Afghanistan performed in the first match was just outstanding. This is the key reason why they are the favorite to win this match. Gurbaz and Ibrahim Zadran are opening the batting inning with Rahmat Shah, Hashmatullah Shahidi, Mohammad Nabi, Najibullah Zadran, and Rashid Khan in the middle and lower batting order. Rahmat Shah was the most successful batter in the previous match with 94 runs to his name. He faced 120 balls and smashed seven boundaries and three huge sixes during his inning. Shahidi also performed well with the bat in the previous match and scored 88 runs with the help of thirteen boundaries.

Afghanistan had produced world-class bowlers in ODI and even T20 cricket. Rashid Khan and Mohammad Nabi are the shining stars of Afghanistan cricket. Fazalhaq Farooqi, Fareed Ahmad Malik, Azmatullah Omarzai, and Mujeeb Ur Rahman are the other bowlers who are part of the ODI squad of Afghanistan. Mohammad Nabi was the highest wicket-taker in the previous match with four wickets to his name in ten overs against 34 runs. Rashid Khan also performed well and picked two wickets in ten overs while he was charged for 39 runs. Fazalhaq Farooqi was the other bowler who picked two wickets in four overs against 41 runs. Fareed Ahmad Malik and Azmatullah Omarzai picked one wicket each while Mujeeb Ur Rahman was the only bowler who could not manage to pick any wicket.

Zimbabwe had played a total of 136 ODI matches so far. They won 67 matches while other teams won 65 matches. 3 matches in Zimbabwe were ended with no result and one match was tied.

Afghanistan had played 543 ODI International matches right now with 142 wins to their name while they had lost 382 matches and their 12 matches were ended with no result and 7 matches were tied.

Zimbabwe had played 26 ODI matches against Afghanistan where they won 10 matches while Afghanistan had won 16 matches.

The 2nd ODI match between Zimbabwe and Afghanistan is going to be played at the Harare Sports Club, Harare. The pitch at this stadium is excellent for batting. The boundaries at this venue are short and will bring the spinners into play. The pitch will continue to be good for batting throughout the match.

Who Will Win Zimbabwe vs Afghanistan 2nd ODI

Who Will Win Zimbabwe vs Afghanistan 2nd ODI Toss-ZIM

Who Will Win Zimbabwe vs Afghanistan 2nd ODI Match-AFG

We had provided you with the above-mentioned today prediction on the basis of our research, understanding, and analysis. You can consider the point we had provided you and in the end, the final decision will be yours that you have to make.