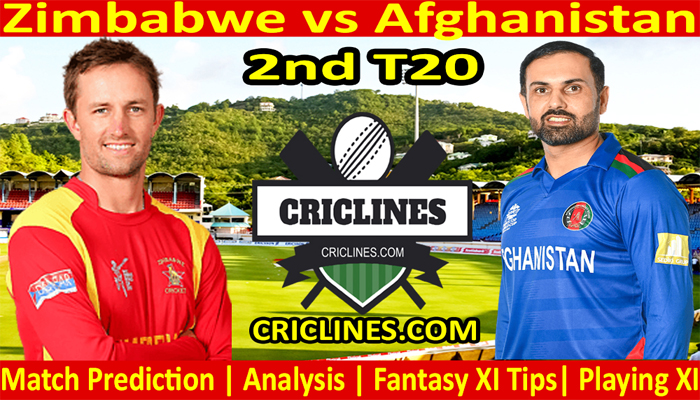 The world is ready to witness yet another big battle of T20 cricket. The 2nd T20 match of the Afghanistan tour of Zimbabwe, 2022 is scheduled to be held on Sunday, 12th June 2022 at Harare Sports Club, Harare. We are providing 100 safe, perfect and accurate today match prediction of Zimbabwe and Afghanistan.

Afghanistan had proved that they are a better side than Zimbabwe in every format of cricket. They had a clean sweep in the ODI series and also had won the first T20 match with a handsome margin of six wickets. On the other side, Zimbabwe had totally failed to give the best performance in this home series against Afghanistan. They had the final chance to save the T20 series after losing the ODI series but for that, they have to win this match at any cost.

The batting order of Zimbabwe was good in the first T20 match but not very impressive as they could manage to score 159 runs in 20 overs. Madhevere and Innocent Kaia is opening the batting inning but they could not provide a good start as their first wicket fell down on the total of just 12 runs. Craig Ervine, Chakabva, Milton Shumba, Sikandar Raza, and Ryan Burl are the key batters of Zimbabwe. Sikandar Raza is an experienced batter in the T20 format and he was the highest run-scorer in the previous match with 45 runs to his name on 31 balls with the help of three boundaries and two huge sixes. Madhevere was the other batter who put some runs on the board. He scored 32 runs while Chakabva could manage to score just 29 runs.

Innocent Kaia scored only six runs while Craig Ervine had nine runs to his name. The bowling department of Zimbabwe totally failed in the first match. They leaked the target of 160 runs in 19.2 overs. Tendai Chatara, Blessing Muzarabani, Luke Jongwe, Ainsley Ndlovu, Sikandar Raza, and Ryan Burl are the leading bowlers of Zimbabwe. Ryan Burl was the most successful bowler in the previous match who picked three wickets in four overs against just 14 runs. Luke Jongwe was the other bowler who had a wicket to his name. Sikandar Raza, Ainsley Ndlovu, Blessing Muzarabani, and Tendai Chatara were the bowlers who could not manage to pick any wicket.

Afghanistan team is playing the best cricket these days and had been just superb in this tour of Zimbabwe. The bowling department of Afghanistan was just good in the first T20 match. Fazalhaq Farooqi, Nijat Masood, Mohammad Nabi, Azmatullah, Rashid Khan, and Karim Janat are the key bowlers of Afghanistan and they were just outstanding in the first match. Nijat Masood was the most successful bowler in the first match with three wickets to his name in four overs but he leaked a lot of runs. He was charged for 39 runs in four overs. Fazalhaq Farooqi, Rashid Khan, and Mohammad Nabi picked one wicket each.

Azmatullah and Karim Janat were the bowlers who could not manage to pick any wicket. The batting department of Afghanistan also performed well and chased the target of 160 runs in 19.2 overs. Almost all batters from their side put some runs on the board. Hazratullah Zazai was the highest run-scorer in the first match with 45 runs to his name. He faced 26 balls and smashed eight boundaries during his inning. Najibullah Zadran was also good with the bat in the previous match. He remained not out after scoring 44 runs on 25 balls with the help of two boundaries and three huge sixes.

Afghanistan had played a total of 92 T20 matches so far. They won 62 matches while other teams won 30 matches

Zimbabwe had played 102 T20 International matches right now with just 28 wins to their name while they had lost 74 matches.

Zimbabwe had played 13 T20 matches against Afghanistan where they won just one match while Afghanistan had won 12 matches.

The 2nd T20 match between Zimbabwe and Afghanistan is going to be played at the Harare Sports Club, Harare. The pitch at this stadium is excellent for batting. The boundaries at this venue are short and will bring the spinners into play. The pitch will continue to be good for batting throughout the match.

Who Will Win Zimbabwe vs Afghanistan 2nd T20

Who Will Win Zimbabwe vs Afghanistan 2nd T20 Toss-AFG

Who Will Win Zimbabwe vs Afghanistan 2nd T20 Match-AFG