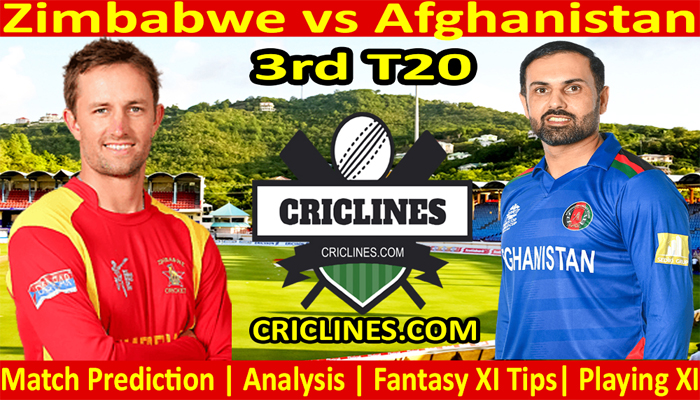 The cricket fans are ready to witness yet another big battle of T20 cricket. The 3rd T20 match of the Afghanistan tour of Zimbabwe, 2022 is scheduled to be held on Tuesday, 14th June 2022 at Harare Sports Club, Harare. We are providing 100 safe, perfect and accurate today match prediction of Zimbabwe and Afghanistan.

Afghanistan had won the series of three T20 matches against Zimbabwe and now they have a golden chance to have a clean sweep. Afghanistan had just out-classed Zimbabwe in this tour and had also the series of three ODI matches. We are sure that they will also win this match. On the other side, Zimbabwe had totally failed to give the best performance in this home series against Afghanistan and they had disappointed their local fans and also the world. Zimbabwe just reduced the losing margin in the previous match but could not win the match. This match is going to be very interesting Zimbabwe can bounce back in this match.

The bowling department of Zimbabwe was under pressure in the T20 series. They were good in the previous T20 match but could not chase the target of 170 runs. We are sure that they will make some key changes in the squad for the T20 series. Craig Ervine is going to lead Zimbabwe in the series of three T20 matches. Dion Myers and Milton Shumba are leading the batting of Zimbabwe with Ryan Burl, Takudzwanashe Kaitano, Sikandar Raza, and Innocent Kaia. Regis Chakabva and Clive Madande are the wicket-keeper batters in the T20 squad of Zimbabwe.

We are sure that Regis Chakabva will get a chance in the final playing eleven for this match. The bowling department of Zimbabwe was under the belt in the T20 series. Will they perform well in the T20 series? this is still a big question. The batting order of Zimbabwe is very strong and experienced and it will not very easy for the bowler of Zimbabwe to put them under pressure. Tendai Chatara, Luke Jongwe, Blessing Muzarabani, Ainsley Ndlovu, and Donald Tiripano are the leading bowlers of Zimbabwe. Donald Tiripano and Blessing Muzarabani are confirmed in the final playing eleven for this match.

Afghanistan was just superb in the T20 series against Zimbabwe in both previously played matches. They had a whitewash in the series of ODI matches and now have a golden chance to have a clean sweep in the T20 series. Hazratullah Zazai and Gurbaz are opening the batting inning for Afghanistan with Usman Ghani, Darwish Rasooli, Najibullah Zadran, Karim Janat, Mohammad Nabi, and Rashid Khan to follow. Najibullah was the most successful and highest run-scorer in the previous match with 57 runs to his name on 46 balls with the help of six boundaries and one huge six. Mohammad Nabi was also outstanding with the bat. He remained not out after scoring 43 runs on just 22 balls. He smashed one boundary and five huge sixes.

Hazratullah Zazai scored 28 runs while Darwish Rasooli and Karim Janat scored 12 runs each. The bowling department of Afghanistan is the backbone of this team. They had played the main role in the series of ODI matches and also in the previous T20 matches. Nijat Masood, Fazalhaq Farooqi, Azmatullah Omarzai, Rashid Khan, Mohammad Nabi, and Karim Janat are the leading bowlers of Afghanistan. Rashid Khan was the highest wicket-taker with two wickets to his name in four overs against 32 runs. Karim Janat, Fazalhaq Farooqi, Mohammad Nabi, and Nijat Masood picked one wicket each while Azmatullah Omarzai was the only bowler who could not manage to pick any wicket.

Afghanistan had played a total of 93 T20 matches so far. They won 63 matches while other teams won 30 matches

Zimbabwe had played 103 T20 International matches right now with just 28 wins to their name while they had lost 75 matches.

Zimbabwe had played 14 T20 matches against Afghanistan where they won just one match while Afghanistan had won 13 matches.

The 3rd T20 match between Zimbabwe and Afghanistan is going to be played at the Harare Sports Club, Harare. The pitch at this stadium is excellent for batting. The boundaries at this venue are short and will bring the spinners into play. The pitch will continue to be good for batting throughout the match.

Who Will Win Zimbabwe vs Afghanistan 3rd T20

Who Will Win Zimbabwe vs Afghanistan 3rd T20 Toss-AFG

Who Will Win Zimbabwe vs Afghanistan 3rd T20 Match-AFG

We had provided you with the above-mentioned today’s prediction on the basis of our research, understanding, and analysis. You can consider the point we had provided you and at the end, the final decision will be yours.