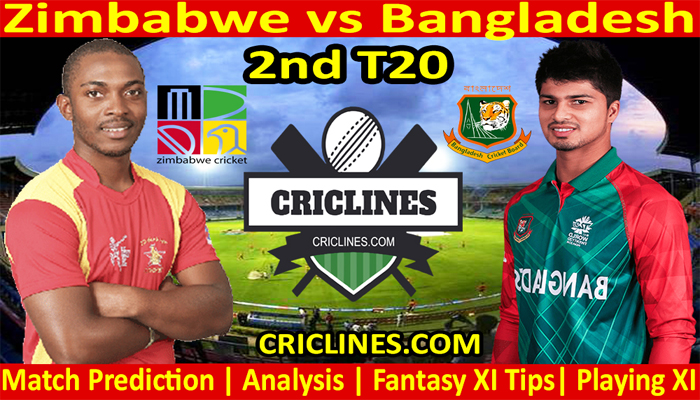 Zimbabwe had a winning start to this home series of three T20 matches against Bangladesh and won the first match with a margin of 17 runs. Zimbabwe also surprised its fans with the batting performance. Remember that Zimbabwe is playing any T20 series after a gap of a long time. On the other side, Bangladesh was a favorite team to win the opening match but they were dominated by the batters of Zimbabwe. Still, major today prediction providers are favoring Bangladesh to win this series of three matches.

The way how the batters of Zimbabwe performed in the first match was just outstanding. They gave a surprise to their fans and scored more than 200 runs in 20 overs. Almost all batters from their side put some runs on the board. Madhevere was the highest run-scorer from their side who scored 67 runs on just 46 deliveries with the help of nine boundaries till he was retd hurt. Sikandar Raza was the other batter who was just good with the bat. He smashed the inning of 65 runs on just 26 balls. He smashed seven boundaries and four huge sixes during his inning. Sean Williams scored 33 runs while the skipper, Craig Ervine could manage to score 21 runs.

The performance of the bowling department of Zimbabwe was not impressive in the first match but they managed to defend the target of 206 runs and leaked 188 runs in 20 overs. Richard Ngarava, Wellington Masakadza, Tanaka Chivanga, Sean Williams, Sikandar Raza, Luke Jongwe, and Wesley Madhevere were used as bowlers in the first match. Luke Jongwe was the highest wicket-taker with two wickets to his name in four overs against 34 runs. Wellington Masakadza picked one wicket in three overs while he was charged for 23 runs. Richard Ngarava also picked one wicket but he leaked a lot of runs. He was charged for 43 runs in four overs. Sikandar Raza also picked one wicket. No other bowler from the side of Zimbabwe could manage to pick any wicket.

Bangladesh lost the opening match of this three T20 matches series and now they have to win both remaining matches to have the series to their name. The bowling department of Bangladesh looked under pressure since the first over and that was the main reason why they leaked a lot of runs. They were charged for 205 runs in 20 overs. Taskin Ahmed, Nasum Ahmed, Mustafizur, Mosaddek Hossain, Shoriful Islam, and Afif Hossain were the leading bowlers from the Bangladesh side in the first match. We don’t think that any of the above-mentioned bowlers were good with the ball. Mustafizur picked two wickets but he was charged for plenty of runs. He leaked 50 runs in four overs.

Mosaddek Hossain picked one wicket in the previous match while no other bowler from the side of Bangladesh could manage to pick any wicket. The batting order of Bangladesh was good in the first match but they failed to chase the target of more than 200 runs. They could manage to score 188 runs while chasing the target of 206 runs. Munim Shahriar and Litton Das opened the batting inning for Bangladesh but could not provide a good opening start. They lost the first wicket on the total of just five runs on the board. The skipper, Nurul Hasan was the most successful batter with 42 runs to his name. He faced 26 balls and smashed one boundary and four huge sixes during his inning. He remained not out till 20 overs. Najmul Hossain Shanto scored 37 runs while Litton Das scored 32 runs.

Zimbabwe had played a total of 109 T20 matches where they won 33 while opposing teams had won 76 matches.

Bangladesh had played 128 T20 matches so far. They had won 44 matches and had lost 81 matches. Their 3 matches ended with no result.

Bangladesh had played 16 T20 matches against Zimbabwe where they had won 11 while Zimbabwe had won five matches.

Bangladesh is overall a strong team and they have a lot of experience when it comes to the T20 format of cricket, so the winning chances of today match for Bangladesh have been increased. The equation of winning chances of both teams for today’s match is mentioned as under.

The st match of Bangladesh vs Zimbabwe will be played at Harare Sports Club, Harare. The pitch at this stadium is good for batting but is one of the slower pitches in the Caribbean. Run-scoring is not going to be very easy and that could actually be a good thing for both teams. A total of 180 runs can be a par score

The weather forecast for Harare on match day is not very good. Rain is predicted for most of the day and so it looks like we are going to struggle to get a game in.

Who Will Win Zimbabwe vs Bangladesh Tri-Series 2019-2nd T20

Dream11 Prediction for Zimbabwe vs Bangladesh-Zimbabwe Tri-Series 2019-2nd T20. After checking the latest player’s availability, which players will be part of both teams, the possible tactics that the two teams might use as we had learned from previous matches of this tournament to make the best possible Dream11 team.

We had provided you with the above-mentioned today prediction on the basis of our research, understanding, and analysis. You can consider the point we had provided you and finally, the decision will be yours that you have to make on your own.