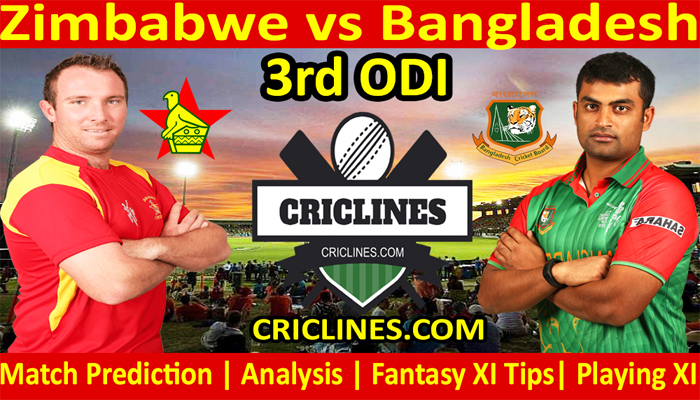 The world is ready to witness yet another big battle of ODI cricket. The 3rd ODI match of the Bangladesh tour of Zimbabwe, 2021 is scheduled to be held on Tuesday, 20th July 2021 at Harare Sports Club, Harare. We are providing 100 safe, perfect, and accurate today match prediction for all matches of Zimbabwe and Bangladesh.

Zimbabwe had lost the both ODI matches played so far and also the series. Now they have a threat of whitewash by Bangladesh in the ODI series. They were beaten in the 2nd ODI match by the margin of three wickets where they won the toss and decided to bat first. The performance of their batting order was good but not excellent. They scored 240 runs in their 50 overs inning. Wesley Madhevere was the highest run-scorer from their side who scored 56 runs with the help of five boundaries and one huge six. The skipper, Brendan Taylor scored 46 runs while Dion Myers had 34 runs to his name.

The bowling department of Zimbabwe also failed to give the best performance in the previous match. They failed to defend the target of 241 runs and leaked this target in 49.1 overs. Luke Jongwe was the most successful and highest wicket-taker from their side who picked two wickets in his eight overs bowled out against 46 runs. Blessing Muzarabani, Richard Ngarava, Wesley Madhevere, and Sikandar Raza picked one wicket each while Tendai Chatara was the only bowler from Zimbabwe’s side who failed to pick any wicket.

Bangladesh had won both ODI-played matches so far and also the series. They have a golden chance to whitewash Zimbabwe in this series of three ODI matches. They are coming to this match on the back of a massive win over Zimbabwe in their previous match with a margin of three wickets. They lost the toss and were put into the field first. The performance of the bowling department of Bangladesh was average in the 2nd ODI match. They were charged for 240 runs in their inning of 50 overs. Shoriful Islam was the highest wicket-taker from their side who picked four wickets in his 10 overs bowled out while he was charged for 46 runs.

Taskin Ahmed, Mohammad Saifuddin, and Mehidy Hasan picked one wicket each while Shakib ul Hasan picked two wickets in his 10 overs bowled out against 42 runs. The batting order of Bangladesh performed well and chased the target of 241 runs in 49.1 overs. Shakib Al Hasan was the most successful and highest run-scorer from their side who remained not out after scoring 96 runs. He smashed eight boundaries during his inning. Mohammad Saifuddin scored 28 runs while Mahmudullah could manage to score 26 runs.

Zimbabwe had played a total of 535 ODI matches so far. They won 140 matches while other teams won 377 matches while their 11 matches were ended with no result and seven matches of Zimbabwe were tied.

Bangladesh had played 387 ODI matches right now with 135 wins to their name. They had lost 245 matches while 7 matches were ended with no result.

Zimbabwe had played 77 ODI matches against Bangladesh where they won 28 while Bangladesh had won 49 matches.

The 3rd ODI match between Zimbabwe and Bangladesh is going to be played at Harare Sports Club, Harare. The pitch at this stadium is excellent for batting. The boundaries at this venue are short and will bring the spinners into play. The pitch will continue to be good for batting throughout the match.

The weather forecast in Harare on match day is not very good. There are some chances of rain but and that is possible that we may have an interrupted match.

Who Will Win Zimbabwe vs Bangladesh 3rd ODI

Who Will Win Zimbabwe vs Bangladesh 3rd ODI Toss-ZIM

Who Will Win Zimbabwe vs Bangladesh 3rd ODI Match-BAN

Dream11 prediction for Zimbabwe vs Bangladesh. After checking the latest ODI player’s availability, the Dream 11 Team for this match of Zimbabwe and Bangladesh is mentioned under.