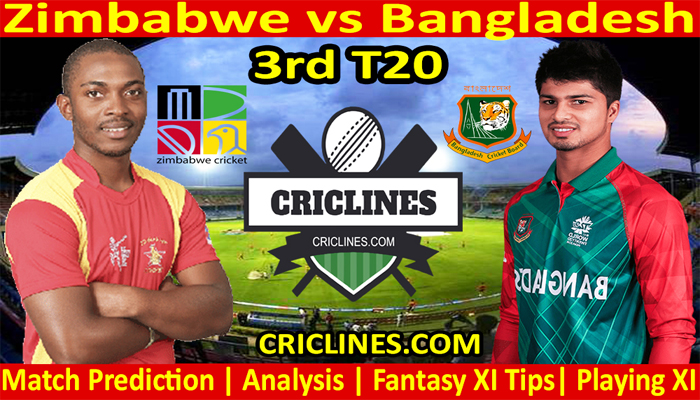 The series of three T20 matches between Zimbabwe and Bangladesh is now tied at 1-1 and this match had become a series decider. The winner of this match will lift the trophy of the T20 series. Zimbabwe won the first match due to the best performance by their batting order but failed to continue the winning momentum. On the other side, Bangladesh bounced back and won the second match after facing a loss in the first match. Bangladesh had bad news as their captain, Nurul Hasan had been ruled out from this series due to injury and this will affect the performance of the Bangladesh team. There are some other players on the team but surely they will miss their skipper.

The batting order of Bangladesh collapsed in the second match after having a good performance in the first match. They could manage to score just 135 runs in 20 overs. The top batting order of Zimbabwe was not impressive and they failed to provide a good start to the team. Chakabva, Craig Ervine, Madhevere, and Sikandar Raza are the start batters of Zimbabwe but Madhevere, Chakabva, and the captain, Craig Ervine could not put some big runs on the board. Sikandar Raza was the only successful batter who scored 62 runs on 53 balls with the help of four boundaries and two huge sixes. Ryan Burl was the other batter who was just good with the bat. He scored 32 runs and smashed three boundaries during his inning.

Bangladesh outclassed Zimbabwe in the second match in almost each and every department of the game. The bowling department of Bangladesh performed well and leaked just 135 runs in 20 overs. Mosaddek Hossain, Mahedi Hasan, Mustafizur, Shoriful Islam, Hasan Mahmud, and Afif Hossain are the star bowlers of Bangladesh. Mosaddek Hossain was the most successful bowler in the previous match who picked five wickets in the previous match in four overs while he was charged for just 20 runs. Hasan Mahmud and Mustafizur picked one wicket each while no other bowlers from their side could manage to pick any wicket.

The batting order of Bangladesh was just outstanding in the second match. They chased the target of 136 runs in 17.3 overs with seven wickets in hand. Almost all batters from their side put some runs on the board. Litton Das was the most successful batter in the previous match with 56 runs to his name on 33 balls with the help of six boundaries and two huge sixes. Afif Hossain also performed well and remained not out after scoring 30 runs. Najmul Hossain Shanto was the other batter who remained not out in the previous match. He faced 21 balls and smashed one boundary during his inning. Anamul Haque scored 16 runs.

Zimbabwe had played a total of 110 T20 matches where they won 33 while opposing teams had won 77 matches.

Bangladesh had played 129 T20 matches so far. They had won 45 matches and had lost 81 matches. Their 3 matches were ended with no result.

Bangladesh had played 17 T20 matches against Zimbabwe where they had won 12 while Zimbabwe had won five matches.

The st match of Bangladesh vs Zimbabwe will be played at Harare Sports Club, Harare. The pitch at this stadium is good for batting but is one of the slower pitches in the Caribbean. Run-scoring is not going to be very easy and that could actually be a good thing for both teams. A total of 170 runs can be a par score

The weather forecast for Harare on match day is not very good. Rain is predicted for most of the day and so it looks like we are going to struggle to get a game in.

Who Will Win Zimbabwe vs Bangladesh Tri-Series 2019-3rd T20

Dream11 Prediction for Zimbabwe vs Bangladesh-Zimbabwe Tri-Series 2019-3rd T20. After checking the latest players’ availability, which players will be part of both teams, the possible tactics that the two teams might use as we had learned from previous matches of this series to make the best possible Dream11 team.

We had provided you the above-mentioned today prediction on the basis of our research, understanding, and analysis. You can consider the point we had provided you and finaly, the decision will be yours that you have to make at your own risk.