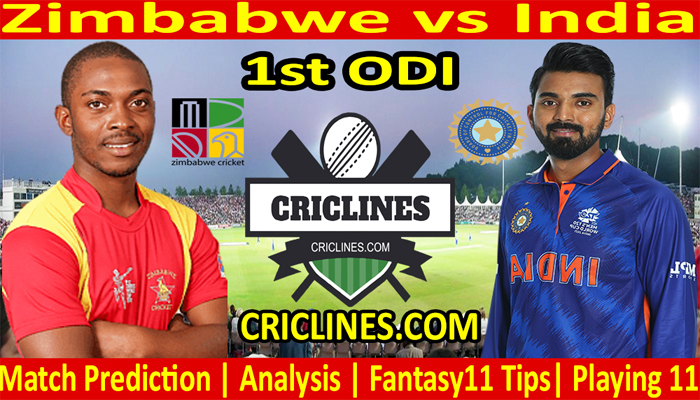 The cricket fans are ready to witness yet another big battle of ODI cricket. The 1st ODI match of the India tour of Zimbabwe, 2022 is scheduled to be held on Thursday, 18th August 2022 at Harare Sports Club, Harare. We are posting 100 safe, perfect, and accurate today match prediction for all matches of Zimbabwe and India.

India had not sent its full strength to this tour of Zimbabwe for the series of three ODI matches. We have no doubt that the team that India sent is young and strong. Zimbabwe had played its recent ODI match against Bangladesh and was good. They beat Bangladesh and we can expect that they will give the best performance against the strong team in the World, India.

Zimbabwe had been good against Bangladesh. Sikandar Raza was just outstanding and was the highest run-scorer in the series against Bangladesh. He was also the highest wicket-taker in the series. He is in good form and we are sure that he will perform well in this series against India. He had to play a key role in this home series. Innocent Kaia was the other batter who performed well.

KL was not part of team India since some previous series but now he had joined the team and will be the part of playing eleven for this match. We can expect that he will perform well in this series. Deepak Chahar was facing some injury issues and he also had been added to the squad for this series against Zimbabwe. Deepak Hooda, Axar Patel, Ishan Kishan, Shubman Gill, and Sanju Samson are also part of team India.

Shikhar Dhawan is also back in team India which adds extra power to the batting order of team India. The bowling unit of India is also young and strong. Prasidh Krishna, Avesh Khan, Shardul Thakur, Kuldeep Yadav, Deepak Chahar, and Mohammad Siraj are part of team India to lead the bowling department.

Zimbabwe had played a total of 548 ODI matches where they won 144 matches and opposing teams won 385 matches. Their 12 matches ended with no result and 7 matches was tied.

India had played a total of 1008 ODI matches so far. They won 526 while other teams won 432 matches. 41 matches of India ended with no result and 9 matches were tied.

Zimbabwe had played 63 ODI matches against India where they won 10 matches and India won 51 matches. Two matches between these two teams ended with no result.

We have no doubt that Zimbabwe is the best team when we compare it with Zimbabwe. They have strong batting order and bowling unit, so the winning chances of Zimbabwe for today match have been increased. The equation of winning chances of both teams for today’s match is mentioned as under.

The 1st ODI match between Zimbabwe and India is going to be played at Harare Sports Club, Harare. This is one of the biggest venues in Zimbabwe in terms of crowd capacity. The pitch at this venue is good for batting. It also has a bit of help for the spin bowlers. As per the live cricket score, a total of 170 runs should be a par score.

The weather forecast in Harare on match day is good. There are almost no chances of rain and we may have a full match to watch.

Who Will Win Zimbabwe vs India 1st ODI

Who Will Win Zimbabwe vs India 1st ODI Toss-ZIM

Who Will Win Zimbabwe vs India 1st ODI Match-IND

Dream11 Prediction for Zimbabwe vs India. After checking the latest player’s availability, the Dream 11 Team for this match of Zimbabwe and India is mentioned under.