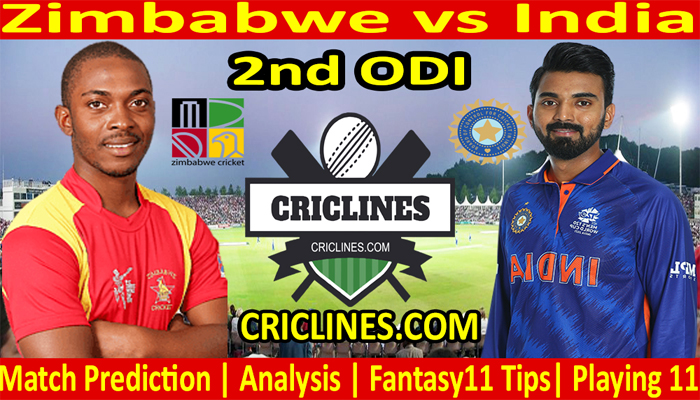 The world is ready to witness yet another big battle of ODI cricket. The 2nd ODI match of the India tour of Zimbabwe, 2022 is scheduled to be held on Saturday, 20th August 2022 at Harare Sports Club, Harare. We are posting 100 safe, perfect, and accurate today match prediction for all matches of Zimbabwe and India.

Zimbabwe lost the toss and was asked to bat first in the first ODI match. They had a good start and did not lose any wicket in the first six overs but after losing the first wicket, the whole batting order of Zimbabwe fell down like a wall of sand. No batsmen from the side of Zimbabwe could score fifty and they hit just two sixes during 50 overs inning. Sikandar Raza, Madhevere, Sean Williams, and Innocent Kaia are the leading batters of this team and we can expect some kind of good performance in this match.

The skipper, Chakabva was the highest run-scorer from the Zimbabwe side who scored 35 runs. Ngarava scored 34 runs while Brad Evans remained not out after scoring 33 runs. The bowling unit of Zimbabwe totally failed to give the best performance in the first match. Richard Ngarava, Victor Nyauchi, Brad Evans, Sean Williams, Sikandar Raza, Luke Jongwe, Wesley Madhevere, and Ryan Burl were used as bowlers in the first match but no bowler from their side could manage to pick any wicket.

The performance of the opening batting pair of India was also outstanding. They chased the target of 185 runs in just 30.5 overs without losing any wicket. The batting order of India was not tested as the opening partnership of India chased the target. Shikhar Dhawan and Shubman Gill remained not out. Shubman Gill was the highest run-scorer with 82 runs to his name in 72 balls. He smashed 10 boundaries and one huge six during his inning. Shikhar Dhawan also had an outstanding performance with the bat. He scored 81 runs while he faced 113 balls and smashed nine boundaries during his inning.

Zimbabwe had played a total of 549 ODI matches where they won 144 matches and opposing teams won 386 matches. Their 12 matches ended with no result and 7 matches were tied.

India had played a total of 1009 ODI matches so far. They won 527 while other teams won 432 matches. 41 matches of India ended with no result and 9 matches were tied.

Zimbabwe had played 64 ODI matches against India where they won 10 matches and India won 52 matches. Two matches between these two teams ended with no result.

The 2nd ODI match between Zimbabwe and India is going to be played at Harare Sports Club, Harare. This is one of the biggest venues in Zimbabwe in terms of crowd capacity. The pitch at this venue is good for batting. It also has a bit of help for the spin bowlers. As per the live cricket score, a total of 170 runs should be a par score.

The weather forecast in Harare on match day is good. There are almost no chances of rain and we may have a full match to watch.

Who Will Win Zimbabwe vs India 2nd ODI

Who Will Win Zimbabwe vs India 2nd ODI Toss-IND

Who Will Win Zimbabwe vs India 2nd ODI Match-IND

Dream11 Prediction for Zimbabwe vs India. After checking the latest player’s availability, the Dream 11 Team for this match of Zimbabwe and India is mentioned under.