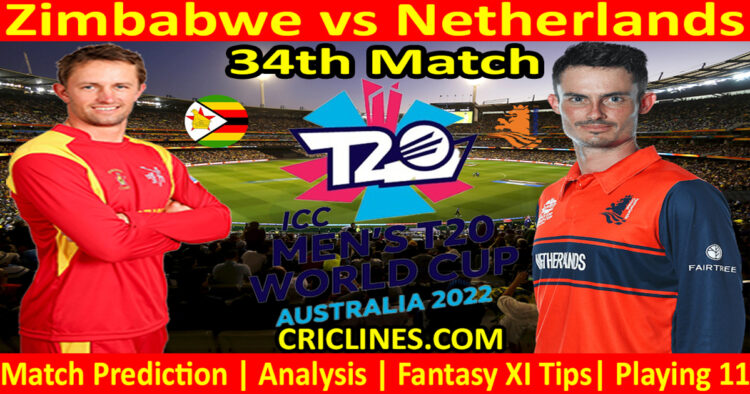 The world is ready to witness yet another big battle of World Cup T20. The 34th match of World Cup T20 2022 is scheduled to play between Zimbabwe and Netherlands on Wednesday, 2nd November 2022 at Adelaide Oval, Adelaide. We are posting a safe, accurate, and secure today match prediction of the ICC T20 World Cup 2022.

Zimbabwe had played three matches in Super 12 with one win to their name. They had lost one match while their one match was washed out by the rain. Their first match against South Africa was not decided and they beat Pakistan in a very interesting match by the margin of just one run. Their match against Bangladesh was also very interesting which they lost by the margin of just three runs.

Netherlands had not performed well in Super 12 matches. They had played three matches and are still searching for a win as they had lost all three matches played and are laying at the bottom of the Super 12 Group 2 table. They had lost their match against Bangladesh, India, and Pakistan.

The previous matches of Zimbabwe against Pakistan and Bangladesh had been very interesting. They were over the line against Pakistan but were beaten by Bangladesh. They lost the toss and were asked to field first. The performance of their bowling unit was not much impressive. They leaked 150 runs in 20 overs. Richard Ngarava was the most successful bowler from their side who picked two wickets in four overs against 24 runs. Blessing Muzarabani also picked two wickets while he was charged with 13 runs in two overs. Sikandar Raza and Sean Williams picked one wicket each while Tendai Chatara, Brad Evans, and Wesley Madhevere were the bowlers who failed to pick any wicket. The bowlers of Zimbabwe are doing their duty but the batters of Zimbabwe totally failed in this tournament.

The target of 151 runs was easy to chase on the pitch of The Gabba, Brisbane but the batters of Zimbabwe totally failed to give the best performance and scored 147 runs. The top batting order of Zimbabwe like Wesley Madhevere, Craig Ervine, Milton Shumba, and Sikandar Raza failed to give the best performance. Sean Williams was the only successful batter from their side who scored 64 runs on 42 balls with the help of eight boundaries. Ryan Burl was the other batter who put some big runs on the board. He remained not out after scoring 527 runs. He faced 25 balls and smashed two boundaries and one huge six during his inning. Regis Chakabva scored 15 runs while no other batter from their side could even enter into the double figure.

The most recent loss of Netherlands came against Pakistan by a big margin of six wickets. They won the toss and decided to bat first. Their batting order proved the wall of sand before the strong bowling unit of Pakistan. They could manage to score just 91 runs in 20 overs. Just two batters of Netherlands could enter into the double figure. Colin Ackermann was the highest run-scorer from their side with 27 runs to his name on 27 balls with the help of two boundaries. The skipper, Scott Edwards scored 15 runs. No other batter from their side could even cross the figure of nine runs.

The bowling unit of Netherlands also failed to give the best performance in the previous match against Pakistan. They failed to defend a low target on the board and leaked the target of 92 runs in 13.5 overs. Fred Klaassen, Paul van Meekeren, Brandon Glover, Tim Pringle, Logan van Beek, and Roelof van der Merwe are the leading bowlers of Netherlands. Brandon Glover was the only successful bowler from their side who picked two wickets in 2.5 overs against 22 runs. Paul van Meekeren was the other bowler who had a wicket to his name. He picked up one wicket in four overs against 19 runs. Roelof van der Merwe, Logan van Beek, Tim Pringle, and Fred Klaassen were the bowlers who failed to pick any wicket.

Zimbabwe had played 4 matches against Netherlands where they had won 3 matches while Netherlands had won just 1 match.

Zimbabwe is full of experienced and young players in the t20 format. The batting order of this team is also strong and some well-known hitters of the t20 format are part of the squad of this team, so the winning chances of today’s match for Zimbabwe have been increased. The equation of who will win today’s cricket match prediction and who will win the cricket match today is mentioned as under.

The 34th match of World Cup T20 2022 is going to be held at Adelaide Oval, Adelaide. We had observed in the previous matches played here that the pitch here at this venue is good for batting. The pitch is bouncy and fast and run-scoring is not much easy in early and middle overs. We are hoping that the surface is bound to get slower and be a bit more difficult for batting in this match. A score of 170 is going to be tough to chase.

Who Will Win Zimbabwe vs Netherlands, 34th Match World Cup 2022

Sikandar Raza, Brandon Glover, and Sean Williams are key players to watch in this match.