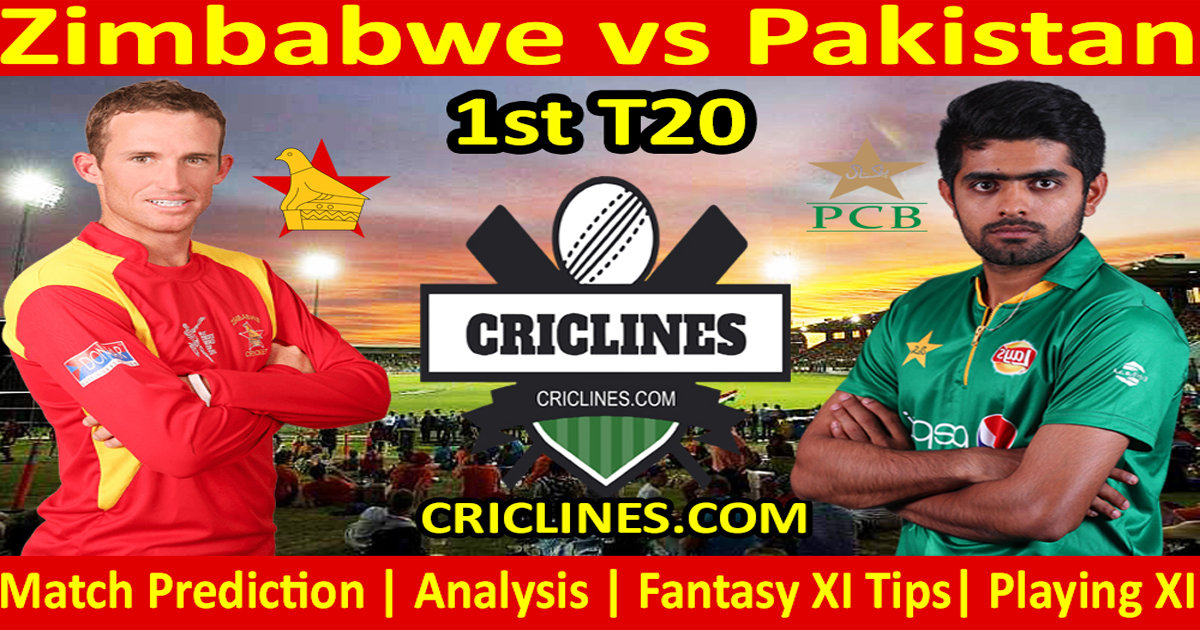 The cricket fans are ready to witness yet another big battle of the T20 cricket. The 1st T20 match of the Pakistan tour of Zimbabwe is scheduled to be held on Wednesday, 21st April 2021 at Harare Sports Club, Harare. We are posting safe, secure, and accurate today match prediction of all matches of Pakistan and Zimbabwe.

Zimbabwe had lost a t20 series recently against Afghanistan and now they are going to face Pakistan at their home conditions. A couple of their key players were missing during the series against Afghanistan. Now, they are back into the team and this adds some extra strength in their batting order. Craig Ervine and Brendan Taylor are the batters who add some extra power in the batting order of Zimbabwe. Now, Sikandar Raza is going to miss this series against Pakistan but Zimbabwe will not miss much during this series.

The bowling department of Zimbabwe is strong and experienced and they also have the advantages of the home conditions. We think that they will give a tough time to the batting order of Pakistan. Craig Ervine, Brendan Taylor, Donald Tiripano, and Sean Williams are available for the selection in the final playing eleven for this first match.

Pakistan is coming to this series after having a smashing win over South Africa with 3-1. The series played earlier and this series will help Pakistan a lot to get the best combination for the world cup coming this year in India. We saw some weakness in the bowling department of Pakistan during the series against South Africa where they leaked plenty of runs. Shaheen Shah Afridi, Mohammad Nawaz, and other bowlers still need to improve the skills.

The batting order of Pakistan was just outstanding against South Africa. They chased the highest total of their t20 history in that series. Babar Azam and Mohammad Rizwan are in superb form of their life. Babar Azam had scored a lot of runs against South Africa and we are hopeful that he will continue this good form in this series. Fakhar Zaman is another batsman from Pakistan who is in good form. He also has the opportunity to cement his place in the team for World Cup.

Zimbabwe had a total of 82 T20 matches to his account. They won 20 matches while opposing teams won 62 matches.

Pakistan had played 167 T20 matches so far. They won 103 matches while opposing teams won 62 matches Two matches of Pakistan were ended with no result. Rember that Pakistan is the only team that had won 100 t20 matches.

Zimbabwe had faced Pakistan in 14 T20 matches where Zimbabwe had not won any match and Pakistan had won all 14 matches against Zimbabwe.

The 3rd match of this series and scheduled to be held at Harare Sports Club, Harare. Pitch here in this stadium is a batting favored and with a little bit of bounce that may help the seamers. Spinners can play a key role in this pitch. A score of near about 180 runs should be as par.

The weather forecast for Harare is good for this match. There are some chances of rain and that is possible that we may have a short match.

Who Will Win Zimbabwe vs Pakistan 1st T20

Who Will Win Zimbabwe vs Pakistan 1st T20 Toss-ZIM

Who Will Win Zimbabwe vs Pakistan 1st T20 Match-PAK