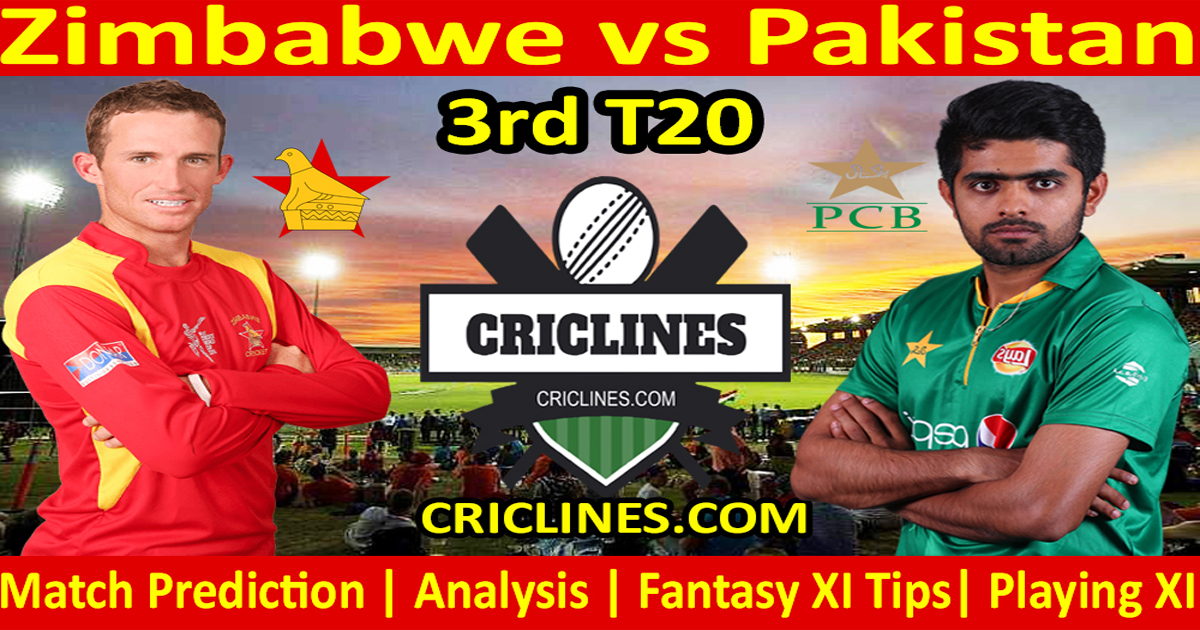 The cricket fans are ready to witness yet another big battle of the T20 cricket. The 3rd T20 match of the Pakistan tour of Zimbabwe is scheduled to be held on Sunday, 25th April 2021 at Harare Sports Club, Harare. We are posting safe, secure, and accurate today match prediction of all matches of Pakistan and Zimbabwe.

Zimbabwe had finally beaten Pakistan in their history of T20 cricket after facing defeat in 15 matches. The batting order of this team failed to put a big total on the board in the previous match. They could manage to score 118 runs in their inning of 20 overs. Kamunhukamwe was the highest run-scorer from their side with 34 runs to his name. Chakabva scored 18 runs while Madhevere had 16 runs to his name.

The bowling unit of Zimbabwe was just outstanding in the previous match. They defended a low target on the board and leaked just 99 runs in their inning of 20 overs. Luke Jongwe was the most successful and highest wicket-taker from their side who picked four wickets in his four overs bowled out against 18 runs. Ryan Burl picked two wickets while Blessing Muzarabani and Richard Ngarava had one wicket each to their names.

Pakistan’s team had been unpredictable when it comes to the t20 format of cricket. They had beaten the strong teams in this format but were beaten by Zimbabwe which is a very weak team in their previous match. The bowling department of Pakistan had an outstanding performance in that match. They leaked just 118 runs in their 20 overs inning. Mohammad Hasnain and Danish Aziz picked two wickets each while Faheem Ashraf, Arshad Iqbal, Haris Rauf, and Usman Qadir picked one wicket each.

The batting order of team Pakistan almost collapsed in the previous match. They failed to chase the target of 119 runs and were all-out on a total of just 99 runs in 19.5 overs. The skipper, Babar Azam was the highest run-scorer from their side who scored 41 runs with the help of five boundaries. Danish Aziz scored 22 runs while Mohammad Rizwan could manage to score just 13 runs.

Zimbabwe had a total of 84 T20 matches to his account. They won 21 matches while opposing teams won 63 matches.

Pakistan had played 169 T20 matches so far. They won 104 matches while opposing teams won 63 matches Two matches of Pakistan were ended with no result. Rember that Pakistan is the only team that had won 100 t20 matches.

Zimbabwe had faced Pakistan in 16 T20 matches where Zimbabwe had won one match and Pakistan had won all 14 matches against Zimbabwe.

The 3rd match of this series and scheduled to be held at Harare Sports Club, Harare. Pitch here in this stadium is a batting favored and with a little bit of bounce that may help the seamers but it is in much favor of batsmen. Spinners can play a key role in this pitch. A score of near about 180 runs should be as par.

The weather forecast for Harare is not good for this match. There are some chances of rain and that is possible that we may have a short match.

Who Will Win Zimbabwe vs Pakistan 3rd T20

Who Will Win Zimbabwe vs Pakistan 3rd T20 Toss-PAK

Who Will Win Zimbabwe vs Pakistan 3rd T20 Match-PAK

Will be updated shortly