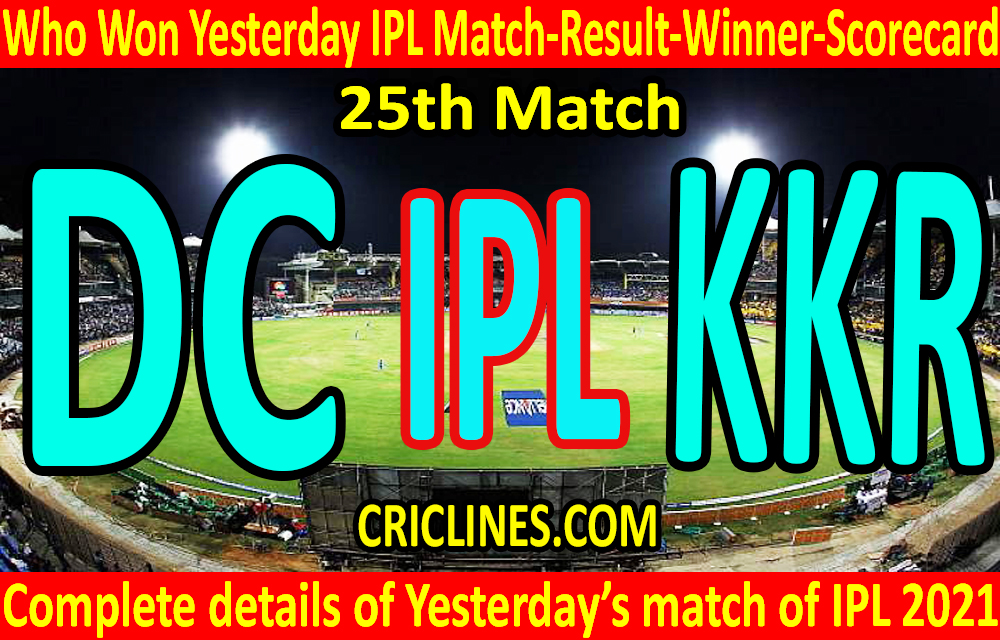 Result: Delhi Capitals was the team who won yesterday’s match of IPL with the margin of seven wickets.

Prithvi Shaw was the man of the match due to his best batting performance.

Delhi Capitals won the toss yesterday’s IPL match and put Kolkata Knight Riders to bat first. The batting order of KKR failed to put a big total on the board and scored 154 runs which were chased by Delhi Capitals in 16.3 overs.

The bowling performance of the Delhi Capitals was good in yesterday’s match of IPL against Kolkata Knight Riders. Lalit Yadav was the most successful bowler with two wickets to his name in three overs against just 13 runs. Axar Patel also picked two wickets while he leaked 32 runs in his four overs bowled out. Avesh Khan and Marcus Stoinis picked one wicket each in the previous match.

The batting order of Delhi Capitals had an outstanding performance in yesterday’s match of IPL and chased the target of 155 runs in just 16.3 overs. Prithvi Shaw was the highest run-scorer from their side who scored 82 runs on 41 deliveries with the help of 11 boundaries and three sixes. Shikhar Dhawan also had an outstanding performance with the bat and scored 46 runs.

Kolkata Knight Riders almost failed in each and every department of the game in yesterday’s match. Their batting order could manage to score 154 runs in their inning of 20 overs. Andre Russell was the highest run-scorer from their side who scored 45 runs on 27 balls with the help of two boundaries and four sixes. Shubman Gill scored 43 runs while Nitish Rana had 15 runs to his name.

The bowling department of Kolkata Knight Riders also failed to give the best performance in yesterday’s match. They failed to defend the target of 155 runs and leaked this target in 16.3 overs. Pat Cummins was the only successful bowler from their side who picked three wickets in his four overs bowled out while he was charged for 24 runs. No other bowler from the KKR side could manage to pick any wicket.