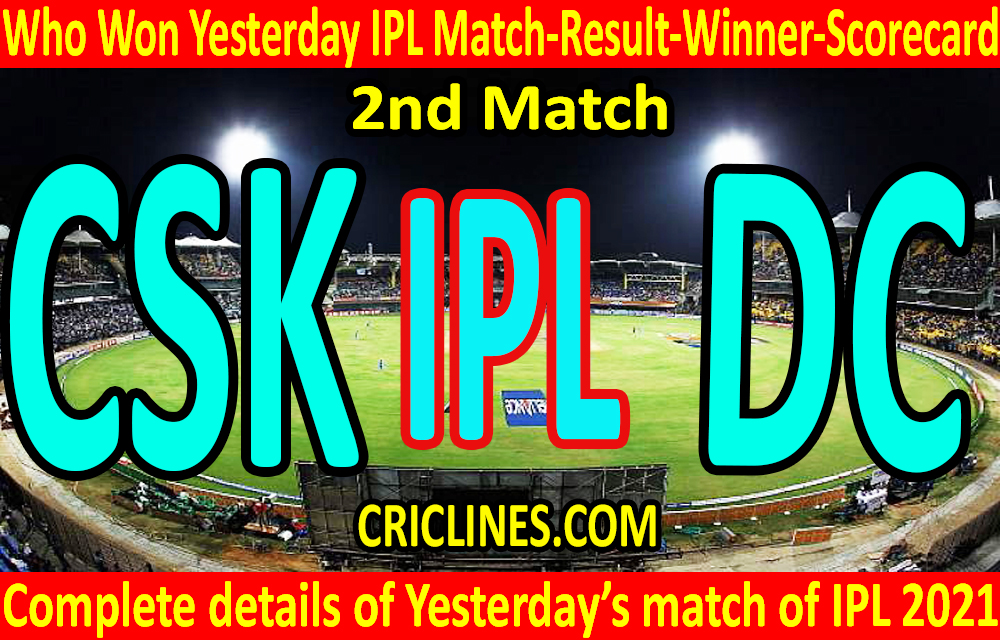 Do you know that who won yesterday IPL match and what was yesterday IPL result? Also scorecard of Yesterday match of IPL. The 1st match of IPL 2021 was played between Chennai Super Kings and Delhi Capitals at Wankhede Stadium, Mumbai.

Result: Delhi Capitals won the match with a handsome margin of seven wickets with eight balls to spare.

Delhi Capitals won the toss in yesterday IPL match and decided to field first. The bowling department of Delhi Capitals failed to give the best performance and leaked 188 runs in their inning of 20 overs but the way how the batting order of DC performed in their opening match, was just outstanding. They chased the target of 189 runs in 18.4 overs.

Chennai Super King lost the toss and was asked to bat first. After losing their two wickets on a total of just seven runs, they scored a total of 188 runs in their inning of 20 overs. Suresh Raina was the highest run-scorer from their side who scored 54 runs on just 36 deliveries with the help of three boundaries and four sixes. Moeen Ali scored 36 runs while Sam Curran smashed the inning of 34 runs on just 15 balls. He smashed four boundaries and two sixes.

Chennai Super King lost their opening match due to the worst performance by their bowling department. They failed to defend the target of 189 runs and leaked this target in 18.4 overs. Shardul Thakur picked two wickets while Dwayne Bravo had one wicket to his name. Deepak Chahar, Sam Curran, Ravindra Jadeja, and Moeen Ali were the bowlers who failed to pick any wicket in their very first match of this season of IPL T20.

Delhi Capitals won the toss and also the match. The bowling department of Delhi Capitals failed to stop the batting order of CSK from scoring the runs even after picking two wickets early. Chris Woakes and Avesh Khan picked two wickets each while Ashwin and Tom Curran picked one wicket each.

The performance of the batting order of Delhi Capitals was just outstanding. They chased the target of 189 runs with seven wickets and eight balls in hand. Shikhar Dhawan was the highest run-scorer from their side who smashed the inning of 85 runs on just 54 deliveries with the help of 10 boundaries and two sixes. Prithvi Shaw was the other batsman from the side of DC who destroyed the bowling department of CSK. He scored 72 runs while he faced 38 balls and smashed nine boundaries and three sixes.