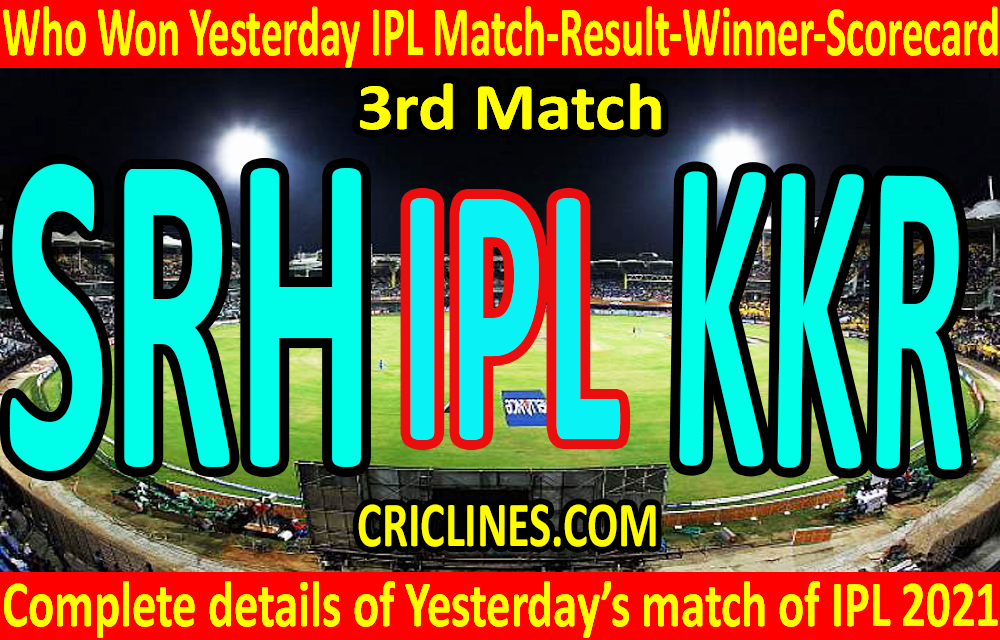 Do you know that who won yesterday IPL match and what was yesterday’s IPL result? Also scorecard of Yesterday match of IPL. The 3rd match of IPL 2021 was played between Sunrisers Hyderabad vs Kolkata Knight Riders at MA Chidambaram Stadium, Chennai.

Result: Kolkata Knight Riders won the match with a margin of 10 runs.

Nitish Rana from Kolkata Knight Riders was the man of the match due to his outstanding batting performance.

Sunrisers Hyderabad won the toss and decided to field first. Many of us were thinking this decision was not right and time also proved this wrong. They failed to pick early wickets and in the end, they leaked 187 runs in their inning of 20 overs. We think that the last over of Bhuvneshwar Kumar was game-changing where he leaked a lot of runs. Rashid Khan and Mohammad Nabi picked two wickets each while T Natarajan and Bhuvneshwar Kumar picked one wicket each.

The batting start of Sunrisers Hyderabad was also poor. They lost their two wickets on a total of just 10 runs. After this, Manish Pandey and Jonny Bairstow took the charge and made a partnership of 92 runs for the 4th wickets. When Jonny Bairstow got out, the score of SRH was 102 runs in 12.3 overs and they were well in the game but they failed to have another partnership and could manage to score 177 runs in their inning of 20 overs.

Kolkata Knight Riders were asked to bat first after losing the toss. That was a good toss to lose for KKR as this proved good. They had an outstanding partnership of 53 runs. Nitish Rana was the highest run-scorer from their side who scored 80 runs on just 56 balls. Rahul Tripathi was the other batsman who had a superb performance and put a total of 53 runs on the board. Karthik smashed the inning of 22 runs on just nine balls.

The performance of the bowling department of KKR was not much impressive but they defended the target of 188 runs and leaked 177 runs in their inning of 20 overs. Prasidh Krishna proved the highest wicket-taker from their side who picked two wickets in his four overs. Shakib Al Hasan, Pat Cummins, and Andre Russell picked one wicket each in their first match.