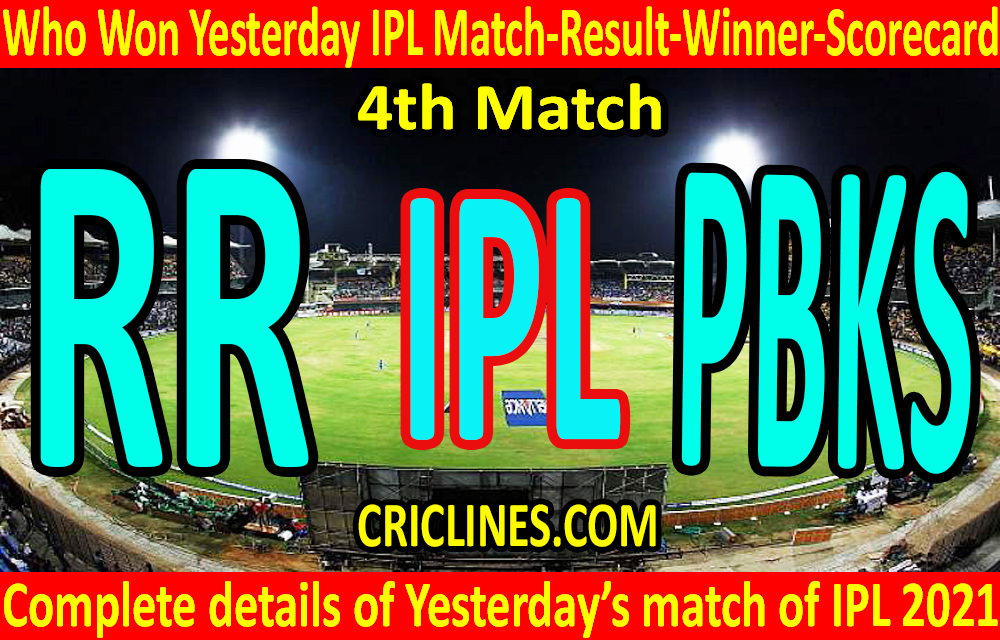 Do you know that who won yesterday IPL match and what was yesterday’s IPL result? Also scorecard of Yesterday match of IPL. The 4th match of IPL 2021 was played between Rajasthan Royals vs Punjab Kings at Wankhede Stadium, Mumbai.

Result: Punjab Kings was the team who won yesterday IPL match by the margin of just four runs.

Sanju Samson, the skipper of Rajasthan Royals was the man of the match due to the best batting performance.

Rajasthan Royals won the toss and decided to field first on a batting favored pitch in yesterday’s IPL match. The performance of their bowling department was not impressive and they leaked 221 runs in 20. The other reason for this high score was a couple of drops of KL Rahul, Chirs Gayle, and Deepak Hooda. In reply, no batsmen of Rajasthan Royals could give the best performance except for the skipper, Sanju Samson.

After winning the toss, Rajasthan Royals decided to field first. The bowling department of Rajasthan Royals also failed to give the best performance. Their field was also poor as they drop a lot of catches. Chetan Sakariya was the highest wicket-taker from their side who picked three wickets in his four overs bowled out against 31 runs. Chris Morris picked two wickets while Riyan Parag had one wicket to his name.

The batting order of Rajasthan Royals failed to give the best performance except for the skipper, Sanju Samson who scored a century. He scored a total of 119 runs on just 63 deliveries with the help of 12 boundaries and seven sixes. Jos Buttler and Riyan Parag scored 25 runs each while Shivam Dube could manage to score just 23 runs. Ben Stokes failed to open the account on the scoreboard and bowled out on golden duck.

Punjab Kings lost the toss and were asked to bat first. The way how their batting order performed in that match was just outstanding. They put a total of 221 runs on the board in their inning of 20 overs. The skipper, KL Rahul was the most successful batsman from their side who scored 91 runs. Deepak Hooda scored 64 runs on just 28 balls while Chris Gayle had 40 runs to his name.

The bowling performance of Punjab Kings was not impressive but somehow they defended the target of 222 runs and leaked 217 runs in their 20 overs inning. Arshdeep Singh was the highest wicket-taker from their side who picked three wickets in his four overs against 35 runs. Mohammed Shami picked two wickets against 33 runs while Jhye Richardson and Riley Meredith picked one wicket each.