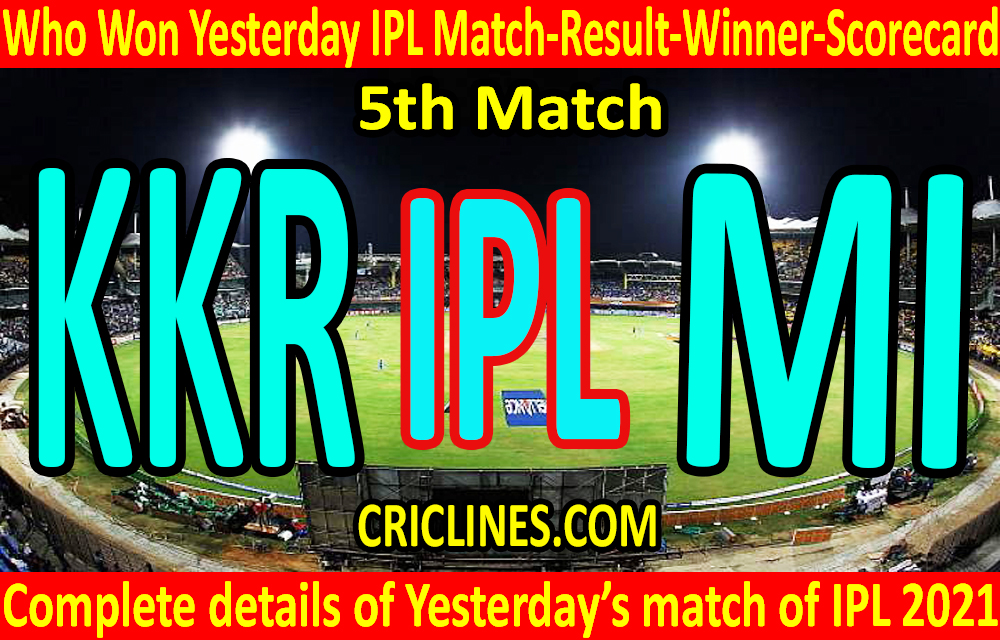 Do you know that who won yesterday IPL match and what was yesterday’s IPL result? Also scorecard of Yesterday match of IPL. The 4th match of IPL 2021 was played between Kolkata Knight Riders vs Mumbai Indians at Wankhede Stadium, Mumbai.

Rahul Chahar from Mumbai Indians was the man of the match due to his excellent bowling performance. He picked four wickets in four overs against 27 runs.

Kolkata Knight Riders won the toss and elected to field first. This decision proved good for them as their bowling unit performed well in that match and leaked just 152 runs but they failed to chase the target and were 10 runs short while chasing this target.

The way how the bowling department of Kolkata Knight Riders performed in the previous match was just outstanding. They stop the strong batting order of Mumbai Indians on a total of 152 runs in their inning of 20 overs. Andree Russell proved the most successful bowler who picked five wickets in his history of t20 cricket. Pat Cummins picked two wickets while Chakravarthy, Shakib ul Hasan, Prasidh Krishna picked one wicket each.

The batting order of Kolkata Knight Riders almost failed to give the best performance. They failed to chase the target of 153 runs which was easily chase able. They could manage to score 142 runs in their inning of 20 overs. Nitish Rana was the most successful and highest run-scorer from their side who scored 43 runs on 47 deliveries with the help of six boundaries and two sixes. Shubman Gill scored 33 runs and after this, no batsmen from their side could even enter into double-figure.

Mumbai Indians won the previous match due to their excellent bowling performance. They were asked to bat first after losing the toss. The batting order of Mumbai Indians failed to give the best performance. They could manage to score 152 runs in their 20 overs inning. Suryakumar Yadav was the highest run-scorer from their side who scored 56 runs on just 36 deliveries with the help of seven boundaries and two sixes. The skipper, Rohit Sharma scored 43 runs while Hardik Pandya and Krunal Pandya scored 15 runs each.

The bowling department of Mumbai Indians had an outstanding performance at IPL Yesterday’s match of IPL. They defended a low target of 153 runs and leaked 142 runs in their inning of 20 overs. Rahul Chahar was the most successful and highest wicket-taker from their side who picked four wickets in his four overs bowled out against just 27 runs. Trent Boult picked two wickets while Krunal Pandya had one wicket to his name. Marco Jansen, Jasprit Bumrah, Kieron Pollard, and even the skipper, Rohit Sharma were the bowlers who failed to pick any wicket.