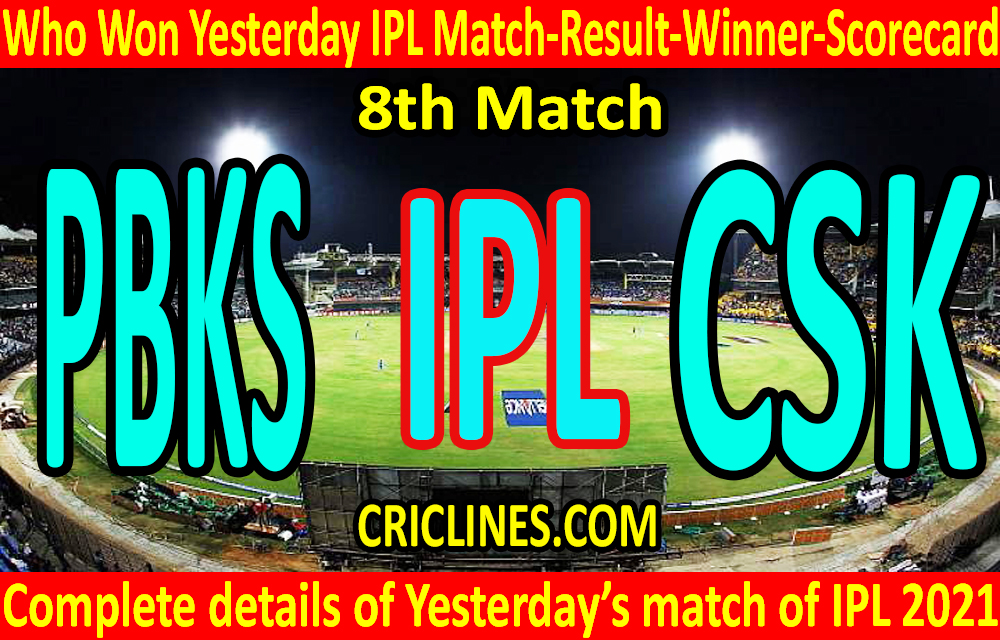 Do you know that who won yesterday IPL match and what was yesterday’s IPL result? Also scorecard of Yesterday match of IPL. The 8th match of IPL 2021 was played between Punjab Kings and Chennai Super Kings at Wankhede Stadium, Mumbai.

Deepak Chahar was the man of the match due to his best bowling performance.

Chennai Super Kings won the toss and decided to field first. Their bowling department had an outstanding performance in that match. They leaked just 107 runs while their batting order also performed well and chased that target in 15.4 overs/

Punjab Kings lost the toss and were asked to bat first. The batting order of this team almost collapsed in yesterday’s match of IPL. They could manage to score just 107 runs and were all-out on the last ball of their inning. Shahrukh Khan was the highest run-scorer with 47 runs while Jhye Richardson scored 15 runs.

The bowling department of Punjab Kings also failed to give the best performance in their yesterday’s IPL match. They failed to defend the target of 108 runs and leaked this target in 15.4 overs. Mohammed Shami picked two wickets while Arshdeep Singh and Murugan Ashwin picked one wicket each.

Chennai Super Kings lost the first match but bounced back strongly in yesterday’s match of IPL. They won the toss and decided to field first. The performance of their bowling unit was just outstanding. They sent the all-team of Punjab Kings back to the pavilion on a total of just 107 runs. Chahar picked four wickets.

The batting order of Chennai Super Kings also performed well and chased the target of 108 runs in 15.4 overs. Moeen Ali was the highest run-scorer with 46 runs to his name. Faf du Plessis remained not out after scoring 36 runs.