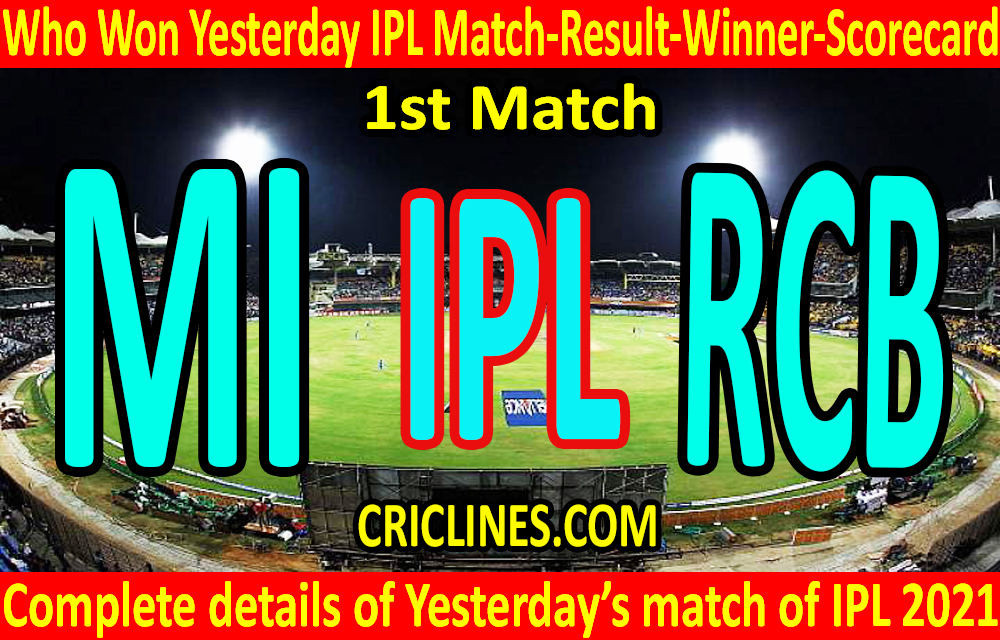 Do you know that who won yesterday IPL match and what was yesterday’s IPL result? Also scorecard of Yesterday match of IPL. The 1st match of IPL 2021 was played between Mumbai Indians vs Royal Challengers Bangalore at MA Chidambaram Stadium, Chennai.

Royal Challengers Bangalore won the toss and decided to field first on the slow pitch of MA Chidambaram Stadium, Chennai. The bowling department of RCB started well and picked the early wicket of the skipper of Mumbai Indians, Rohit Sharma. He was run out by Virat Kohli and Chahal. After this, they failed to stop the batting order of Mumbai Indians from scoring the runs. The complete details of yesterday IPL match are mentioned under:

Harshal Patel picked five wickets in his four overs bowled out against 27 runs and he became the 1st bowler who had ever picked five wickets against Mumbai Indians. Washington Sundar, Jamieson picked one wicket each while Christian, Shahbaz Ahmed, Chahal, and Siraj were the bowlers who failed to pick any wicket in the first match of IPL 2021. They gave a target of 160 runs to chase by their batting order.

The batting order of Royal Challengers Bangalore had a superb start and scored 36 runs for the partnership of the first wicket. AB de Villiers remained the highest run-scorer from their side who scored 48 runs on just 27 deliveries with the help of four boundaries and two sixes. Glenn Maxwell smashed the inning of 39 runs on just 28 balls with the help of three boundaries and two sixes. The skipper, Virat Kohli scored 33 runs. They chased the target of 160 runs on the last ball of their inning.

We don’t think the performance of the batting order of Mumbai Indians was much impressed. That was a pitch where they could score a total of 180 easily. Chris Lynn was the highest run-scorer from their side who scored 49 runs. Unfortunately, he was just one run short from his half-century. He faced 35 deliveries and smashed four boundaries and three sixes.

Ishan Kishan was the other batsman who put some runs on the board from the Mumbai Indians’ side. He scored 28 runs while the skipper, Rohit Sharma could manage to score 19 runs. The bowling department of Mumbai Indians also failed to give the best performance. They leaked the target of 160 runs on the last ball of their inning. Jasprit Bumrah and Marco Jansen picked two wickets each while Trent Boult and Krunal Pandya picked one wicket each.