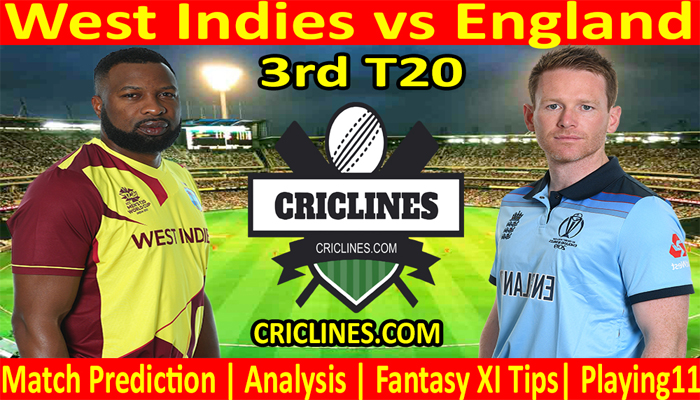 The world is ready to witness yet another big battle of T20 cricket. The 3rd T20 match of the West Indies tour of England, 2022 is scheduled to be held on Wednesday, 26th January 2022 at Kensington Oval, Bridgetown, Barbados. We are providing 100 safe, perfect, and accurate today match predictions of the West Indies and England.

The series of five T20 matches is now tied with 1-1 and the winner of this match will almost cement his place to win this series. The previous match between these two teams was a thriller which was decided on the last ball of the second inning.

West Indies won the 1st T20 match but were beaten in the second thrilling match by the margin of just one run. They won the toss and decided to field first. The performance of their bowling unit was not impressive. They leaked 171 runs in their inning of 20 overs. Jason Holder was the most successful bowler from their side who picked two wickets in his four overs bowled out against 25 runs. Fabian Allen also picked two wickets while he was charged for 50 runs in his four overs bowled out.

Sheldon Cottrell, Akeal Hosein, Romario Shepherd, and the skipper, Kieron Pollard picked one wicket each. The performance of the batting order of West Indies was good but they failed to chase the target of 172 runs and scored 170 runs in their inning of 20 overs. Akeal Hosein was the most successful batter from their side who remained not out after scoring 44 runs. He faced just 16 balls and smashed three boundaries and four huge sixes during his inning. Romario Shepherd also scored 44 runs on 28 balls.

England bounced back strongly after losing the 1st T20 match by the margin of nine wickets. They were asked to bat first after losing the toss. The performance of their batting order was good but not outstanding. They scored 171 runs in their 20 overs inning. Jason Roy was the highest run-scorer from their side who scored 45 runs on 31 deliveries with the help of six boundaries and two huge sixes. Moeen Ali scored 31 runs while Chris Jordan had 27 runs to his name.

The performance of the bowling unit of England was not impressive but they defended the target of 172 runs and leaked 170 runs in their 20 overs inning. Moeen Ali was the most successful and highest wicket-taker from their side who picked three wickets in his four overs bowled out against just 24 runs. Adil Rashid also picked two wickets while he was charged for 24 runs in his four overs bowled out. Reece Topley and Chris Jordan picked one wicket each.

West Indies had played a total of 154 T20 matches so far. They won 66 matches while other teams won 79 matches. 20 matches of West Indies were ended with no result.

England had played 145 T20 matches right now with 78 wins to their name while they had lost 62 matches. Their 5 matches were ended with no result.

West Indies had played 21 T20 matches against England where they won 12 matches while England had won 9 matches.

The 3rd T20 Match match between West Indies and England is going to be played at Kensington Oval, Bridgetown, Barbados. The pitch at this stadium is excellent for batting. The boundaries at this venue are short and will bring the spinners into play. The pitch will continue to be good for batting throughout the match. A total of 190 can be difficult for batting second to chase.

The weather forecast in Barbados on match day is not very good. There are some chances of rain but that is possible that we may have an interrupted match.

Moeen Ali, Jason Roy, and Akeal Hosein are key players to watch in this match.

Who Will Win West Indies vs England 3rd T20 Match

Dream11 Prediction for West Indies vs England. After checking the latest player’s availability, the Dream 11 Team for this match of West Indies and England is mentioned under.