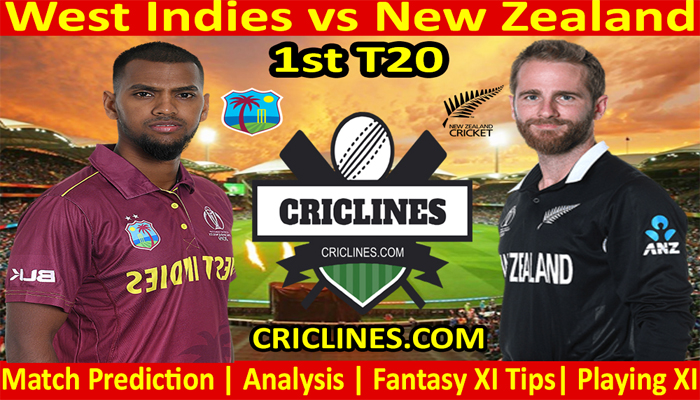 The cricket fans are ready to witness yet another big battle of T20 cricket. The 1st T20 match of the New Zealand tour of West Indies, 2022 is scheduled to be held on Wednesday, 10th August 2022 at Sabina Park, Kingston, Jamaica. We are providing 100 safe, perfect, and accurate today match prediction of the West Indies and New Zealand.

New Zealand is starting the tour of the West Indies where they will play three T20s and the same ODI matches. West Indies had played a T20 series against India recently where they lost the series by the margin of 4-1. They could manage to win just one out of five T20 matches. They beat Bangladesh earlier in the series of two T20 matches. New Zealand had won three T20 series against Ireland, Scotland, and the Netherlands. This is a record that New Zealand had whitewashed three countries continuously.

The recent series of West Indies against India in the home conditions was not very good for the home side. West Indies failed to give the best performance in each and every department of the game against India. West Indies had made a couple of changes in the squad for this series of three T20 matches against New Zealand. Nicholas Pooran is the regular captain of the West Indies and he will be leading the side once again against New Zealand. Rovman Powell, Shamarh Brooks, Brandon King, and Shimron Hetmyer are back in the batting squad of the West Indies.

Shimron Hetmyer is a dangerous batter in the shorter format of cricket and he can play well against the bowlers of New Zealand. Devon Thomas is the wicket-keeper batter in the squad of West Indies with the skipper, Nicholas Pooran while Kyle Mayers is batting-all rounders in this team. The bowling department in West Indies is also strong and experienced. Dominic Drakes, Akeal Hosein, Alzarri Joseph, Obed McCoy, Romario Shepherd, Odean Smith, and Hayden Walsh are the leading bowlers in the squad of West Indies for this home series against New Zealand.

The way how New Zealand performed in the recent T20 series is just amazing. They had a whitewash against Ireland, Netherlands, and Scotland in a row. We know that Scotland and Netherlands are weak sides but Ireland is a strong side. New Zealand had made a few changes in the squad for this series of three matches against West Indies. New Zealand is a team that had a strong batting order. Kane Williamson is back on the squad and he will be leading New Zealand in this series. He will be also handling the batting order with Martin Guptill and Daryl Mitchell. West Indies had included a total of five wicket-keepers in the squad and this will be very tough for the selectors to choose the best one.

West Indies had played a total of 168 T20 matches with 71 wins to their name. They had lost 87 matches while their 10 matches ended with no result.

New Zealand had played 167 T20 Internationals. They had won 87 matches and lost 76 matches. Their 4 matches ended with no results.

West Indies had faced New Zealand in 16 T20 matches where they won 5 while New Zealand won 9 matches while two matches between these two teams ended without any result.

The 1st T20 match between West Indies and New Zealand is going to be played at Sabina Park, Kingston, Jamaica. The pitch at this stadium is excellent for batting. The boundaries at this venue are short and will bring the spinners into play. The pitch will continue to be good for batting throughout the match.

The weather forecast in Jamaica on match day is good. There are almost no chances of rain and we should have a full match.

Who Will Win West Indies vs New Zealand 1st T20

Dream11 prediction for West Indies vs New Zealand. After checking the latest player’s availability, the Dream 11 Team for this match of West Indies and New Zealand is mentioned under.

We had provided you the above-mentioned today prediction on the basis of our research, understanding, and analysis. You can consider the point we had provided you and in the final decision will be yours that you have to make at your own risk.