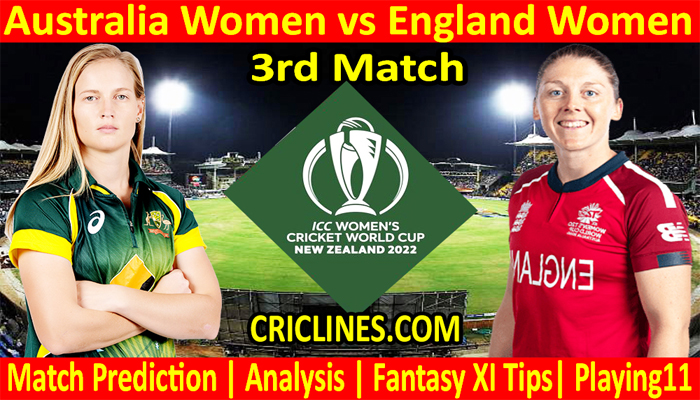 The cricket fans are ready to witness yet another big battle of Women’s ODI cricket. The 3rd match of Women’s World Cup 2022 is scheduled to play between Australia Women and England Women on Saturday, 5th March 2022 at Seddon Park, Hamilton. We are posting safe, accurate, and secure today match prediction of world cup free.

The warmup match of Australia Women against New Zealand Women was very interesting where a total of near about 650 runs were scored in 100 overs. Australia lost that match even after having a good batting performance. They scored 321 runs and their full team came back to the pavilion in 49.3 overs. Meg Lanning was the highest run-scorer from their side who scored 87 runs on 86 deliveries with the help of nine boundaries and two huge sixes. Alyssa Healy also performed well with the bat and scored 64 runs.

Ashleigh Gardner was the other batter who put some runs on the board. She scored 60 runs while Beth Mooney had 55 runs to her name. Australia lost the warmup match due to the worst performance by their bowling unit. They failed to defend the target of 322 runs and leaked this target in 43.1 overs. Alana King was the only bowler from their side who had one wicket to her name. No other bowler from their side could manage to pick any wicket. Ellyse Perry, Megan Schutt, Darcie Brown, Jess Jonassen, Tahlia McGrath, Annabel Sutherland, Nicola Carey, and Ashleigh Gardner were the bowlers who failed to pick any wicket.

England Women must be confident with their performance which they gave in the warmup match against Bangladesh Women. They had beaten Bangladesh with a huge margin of 109 runs. The way how their batting order performed in the warmup match was just outstanding. They scored a total of 310 runs in their 50 overs inning. Almost all batters from their side put some runs on the board. Natalie Sciver was the most successful and highest run-scorer from their side who scored a century. She scored 108 runs while she faced 101 balls and smashed nine boundaries during her inning.

Lauren Winfield scored 55 runs on 43 deliveries and smashed nine boundaries during her inning. Tammy Beaumont scored 38 runs. The performance of the bowling unit of England was also just outstanding. They leaked 201 runs while defending the target of 311 runs. Freya Davies, Natalie Sciver, Charlie Dean picked two wickets each while Heather Knight, Kate Cross, and Sophia Dunkley picked one wicket each.

The 3rd match of Women’s ODI World Cup 2022 will be played at Seddon Park, Hamilton. The pitch here at this stadium has something in it for both batsmen and bowlers. It is typically a little slow and low but very flat. The pace bowlers have very little to work with and it is the slower bowlers that will be the bigger threat.

Check out the Dream11 lineup for the 20th Women’s ODI World Cup match to be played between Australia Women vs England Women.