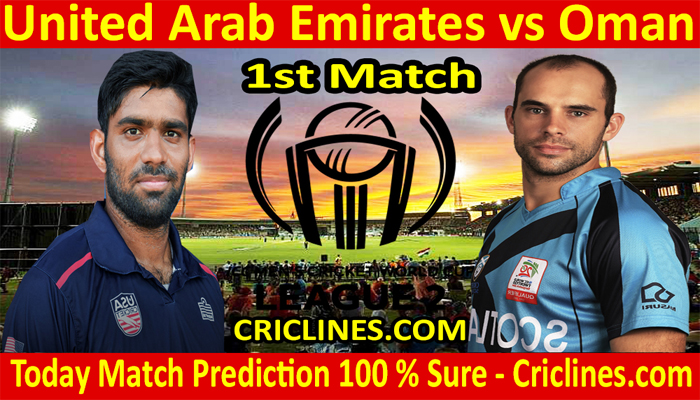 The cricket fans are ready to witness yet another big battle of ICC Cricket World Cup League 2019-23 in UAE. The 1st match of ICC Cricket World Cup League 2019-23 is scheduled to play between the United Arab Emirates and Oman on Saturday, 5th Monday 2022 at ICC Academy Ground, Dubai. We are posting safe, accurate, and secure today match prediction of WC Qualifier free.

The United Arab Emirates had beaten the same team, Oman in their most recent match with the margin of four wickets where they won the toss and decided to field first. The performance of their bowling unit was good. They leaked 195 runs and send the full team of Oman back to the pavilion in 47.2 overs. Basil Hameed was the most successful and highest wicket-taker from their side who picked five wickets in his 5.2 overs bowled out against just 17 runs.

Ahmed Raza also performed well and picked two wickets while Akif Raja, Zahoor Khan, and Rohan Mustafa picked one wicket each. The batting order of UAE also performed well and chased the target on 196 runs in 45.3 overs. Chundangapoyil Rizwan was the highest run-scorer from their side who remained not out after scoring 76 runs. He faced 116 balls and smashed five boundaries.

The batting order of Oman failed to put a big total on the board in their most recent match. They could manage to score just 195 runs. Shoaib Khan was the only successful batter from their side who scored 68 runs on 59 deliveries with the help of five boundaries and three huge sixes. Ayaan Khan scored 33 runs while Kashyap had 29 runs to his name.

Like the bowling, the batting order of Oman also failed to defend a low target on the board. They leaked the target of 196 runs in 45.3 overs. Bilal Khan was the highest wicket-taker from their side who picked three wickets in 9.3 overs bowled out while he was charged for 47 runs. Kaleemullah, Zeeshan Maqsood, and Khawar Ali picked one wicket each.

Oman is a well-balanced side and has a strong batting order and bowling unit in the side, so the winning chances of today’s match for Oman have been increased. The equation of who will win today’s cricket match prediction and who will win the cricket match today is mentioned as under.

The toss is going to play an important role in the result of each and every match of ICC Cricket World Cup League 2019-23 in UAE. According to toss prediction, the team who will win the toss will elect to bat first as the behavior of pitch will be the same during both innings.

The 1st match of ICC Cricket World Cup League 2019-23 in UAE is going to be played at ICC Academy Ground, Dubai. We had observed in the previous matches played here that the pitch here at this venue is good for batting. The track is slower than the others we have seen and helps the spinners quite a bit. We are hoping that the surface is bound to get slower and be a bit more difficult for batting in this match. A score of 160 is going to be tough to chase.

The weather forecast for Dubai is good for this cricket match. There are some chances of rain but we are hoping for a full and completed match.