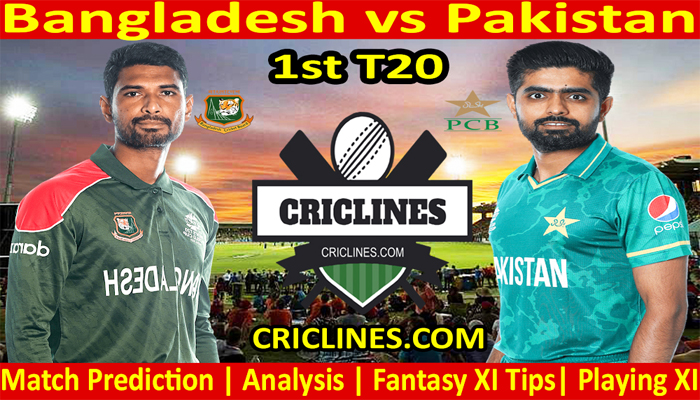 The world is ready to witness yet another big battle of T20 cricket. The 1st T20 match of the Pakistan tour of Bangladesh, 2021 is scheduled to be held on Friday, 19th November 2021 at Shere Bangla National Stadium, Dhaka. We are providing 100 safe, perfect, and accurate today match prediction of Bangladesh and Pakistan.

Bangladesh had the worst campaign in T20 World Cup and failed to any match against the test playing countries. They lost all matches played in the super 12 stages and even they lost against Scotland. They need to have a look at why they were very poor in ICC T20 World Cup. On the other side, Pakistan was the most successful team after the end of group stage matches of ICC T20 World Cup. They won all matches and beat strong teams like India and New Zealand. Their most recent match against Australia was a very close contest but they lost and could not move to the final.

Bangladesh was just outstanding right before the World Cup and they beat New Zealand and Australia at their home venues but they were totally failed in the big event of cricket, ICC T20 World Cup. We think that they made the pitches which were in the favor of the home side where they performed well but they were totally collapsed in the neutral venues. Tamim Iqbal is not part of the squad of Bangladesh due to his thumb injury but the other squad is almost the same which was in the World Cup even they failed to give their best. The batting conditions in Bangladesh are good and we had seen big totals on the board in T20 cricket in the past.

Pakistan was just superb in World Cup in each and every department of the game. The bowling unit of Pakistan is at its peak performance while their batting order is also in excellent form. They showed their talent in the World Cup which many of us were not expecting. Mohammad Rizwan, Fakhar Zaman, and the skipper, Babar Azam is going to lead the batting order. Babar Azam was the highest run-scorer in T20 World Cup and scored four fifties in six matches. Mohammad Rizwan was the other best performance with the bat. He played the inning of more than 60 runs in semi-final matches even he was not feeling even and had chest pain.

Mohammad Hafeez is the only player who is not part of the squad and Iftikhar Ahmed will be replacing him. We think that Iftikhar Ahmed or Haider Ali will get a chance in this match. Asif Ali had proved himself as a finisher and he can put some big runs on the board in this match as the conditions of Bangladesh will favor him. Imad Wasim and Shadab Khan can also bat well in the middle and lower order. The real strength of Pakistan is their bowling unit. Shaheen Afridi had led Pakistan in World Cup with Haris Rauf and Imad Wasim. We think that Hasan Ali will be rested in this match and Shahnawaz Dhani may have a chance to play this match.

Bangladesh had played a total of 120 T20 matches so far. They won 43 matches while other teams won 75 matches. Two matches of Bangladesh were ended with no result.

Pakistan had played 183 T20 matches right now with 112 wins to their name. They had lost 66 matches while their five matches were ended with no result.

The 1st T20 match between Bangladesh and Pakistan is going to be played at Shere Bangla National Stadium, Dhaka. The pitch at this stadium is excellent for batting. The boundaries at this venue are short and will bring the spinners into play. The pitch will continue to be good for batting throughout the match.

Who Will Win Bangladesh vs Pakistan 1st T20

Who Will Win Bangladesh vs Pakistan 1st T20 Toss-BAN

Who Will Win Bangladesh vs Pakistan 1st T20 Match PAK