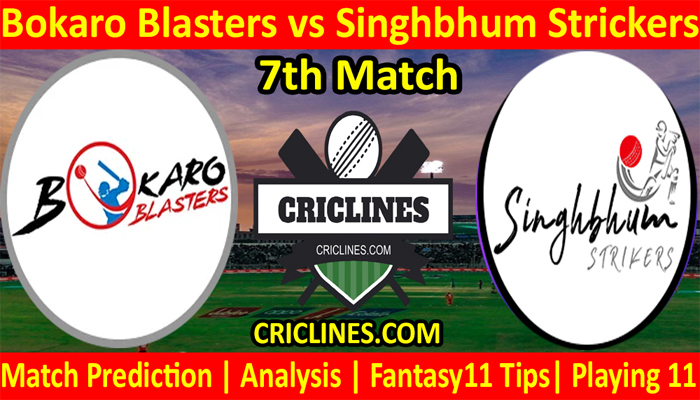 The world is ready to witness yet another big battle of the Jharkhand T20 League. The 7th Match of Jharkhand T20 League 2022 is scheduled to play between Bokaro Blasters and Singhbhum Strickers on Sunday, 17th June 2022 at JSCA International Stadium Complex, Ranchi. We are posting safe, accurate, and secure today match prediction for all matches of Jharkhand T20 free.

Bokaro Blasters had been average in this edition of the Jharkhand T20 League. They had played a total of two matches with one win and the other lost. They were beaten by Ranchi Raiders in their opening match by the margin of nine wickets through the DLS method but they made a comeback in the next match and won the next match against Dhanbad Dynamos with a handsome margin of six wickets. The performance of the bowling department of Bokaro Blasters was just good in the previous match where they leaked just 109 runs in their inning of 20 overs. Arpit Yadav was the most successful and highest wicket-taker from their side who picked three wickets in his four overs bowled out while he was charged for just 16 runs.

Saurabh Sekhar and Vikash Singh picked two wickets each while Aditya Singh had one wicket to his name. The batting order of Bokaro Blasters also performed well and chased the target of 110 runs in 17.2 overs. Satya Setu was the highest run-scorer with 26 runs to his name on 24 balls with the help of four boundaries and one huge six. Aditya Singh also performed well and scored 25 runs. He faced 20 balls and smashed three boundaries during his inning. Sachin Tiwary remained not out after scoring 23 runs.

Singhbhum Strickers also had not been impressive in this tournament. They had also played two matches with one win and the same loss. They holding the third position on the points table of the Jharkhand T20 League right now. They lost their opening match against Ranchi Raiders but won the next match against Singhbhum Strickers with a huge margin of seven wickets. They won the toss and decided to field first. The performance of their bowling unit was not impressive. They leaked 183 runs in their inning of 20 overs. Ravi Yadav-II, Monu Kumar, and Mohit Kumar picked one wicket each while Bal Krishna, Rishu Chauhan, and Sonu Kr-Singh were the bowlers who could not manage to pick any wicket.

Singhbhum Strickers won the previous match due to the best performance by their batting order. They chased the target of 184 runs in 19.4 overs. Sumit Kumar was the highest run-scorer from their side who remained not out after scoring 86 runs on just 37 balls with the help of five boundaries and eight huge sixes. Aryaman Sen was the other batter who was just good with the bat. He scored 37 runs while Mohit Kumar had 30 runs to his name.

The toss will play a key role in the decision of all matches of the Jharkhand T20 League. Defending is much easier in the conditions in England than chasing so according to toss prediction, the team who will win the toss will elect to bat first.

The 7th Match of the Jharkhand T20 League is going to be played at JSCA International Stadium Complex, Ranchi. The pitch here at this stadium is expected to be flat and much favored for batting. It has a decent amount of pace and bounces in it. We may have some high-scoring matches here. The pitch may also have some help in it for the seamers.

Check out the Dream11 fantasy prediction for the 7th Match of Jharkhand T20 League, between Bokaro Blasters and Singhbhum Stickers.