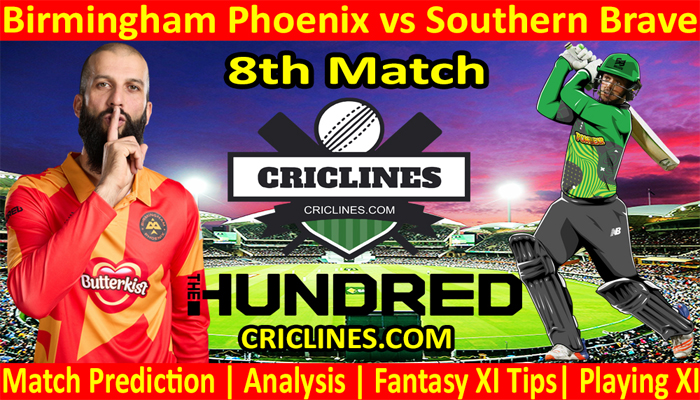 The world is ready to witness yet another big battle of The 100 League. The 8th match of The Hundred League 2022 is scheduled to play between Birmingham Phoenix and Southern Brave on Wednesday, 10th August 2022 at Edgbaston, Birmingham. We are posting safe, accurate, and secure today match prediction of The Hundred Women Competition free.

Birmingham Phoenix was the runner-up team of the first edition of The Hundred League as they were beaten in the final match by the same team, Southern Brave. Remember that they were the best performing team after the completion of league matches but they had failed to have a kick start to this second edition of The Hundred League and had lost their opening match against Trent Rockets. Southern Brave are the defending champions and had a start to this tournament like a champion. They had won their opening match against Welsh Fire with a huge margin.

Birmingham Phoenix has a strong and experienced batting order in the squad but they failed to put a huge total on the board in the previous match. They could manage to score just 143 runs in their 100-balls inning. M Hammond, Will Smeed, Moeen Ali, Liam Livingstone, and Mousley are the strong batters of Birmingham Phoenix. Liam Livingstone was the most successful and highest run-scorer from their side who scored 47 runs on just 28 balls with the help of one boundary and five huge sixes. The skipper, Moeen Ali also performed well and scored 35 runs while M Hammond had 28 runs to his name. Will the batting order of Birmingham Phoenix perform well in this match? this is a big question which will be answered in this match.

Moeen Ali, Tom Helm, Graeme van Buuren, Kane Richardson, Imran Tahir, Benny Howell, and Liam Livingstone are the players who were used in the previous match as bowlers. These bowlers are well recognized and world-class bowlers in the shorter format of cricket. Tom Helm was the highest run-scorer from the side of Birmingham Phoenix who picked two wickets in 12 balls against just 11 runs. He was bowling well but was given short balls to bowl. This is a very strange thing. Liam Livingstone and the skipper, Moeen Ali picked one wicket each while no other bowlers from their side could manage to pick any wicket.

The way how the bowling unit of the defending champions, Southern Brave performed in the previous match was just outstanding. They leaked 107 runs in their 100 balls inning. Craig Overton, M Hogan, James Fuller, Chris Jordan, Stoinis, J Lintott, and Rehan Ahmed are the leading bowlers of Southern Brave. Chris Jordan was the most successful bowler in the previous match who picked two wickets in 15 balls and leaked 12 runs. Craig Overton was the other bowler who picked two wickets. He bowled out 20 balls and leaked 21 runs while M Hogan and J Lintott picked one wicket each.

Rehan Ahmed, Marcus Stoinis, and James Fuller were the bowlers from the side of Southern Brave who could not manage to pick any wicket. The performance of the batting order of Southern Brave was also outstanding in the first match. They chased the target of 108 runs in just 70 balls. James Vince, Alex Davies, and Marcus Stoinis were used to bat in the first match. James Vince was the most successful batter in the previous match who remained not out after scoring 71 runs on just 41 balls with the help of eight boundaries and one huge six. Alex Davies also performed well and scored 26 runs while Marcus Stoinis remained not out after scoring six runs.

Southern Brave is overall a strong team as compared to the Birmingham Phoenix at least on papers. According to The Hundred prediction, Southern Brave is the favorite team that will win this match. There are many factors that make Birmingham Phoenix a favorite team to win this match. Some of the key factors are mentioned as under:

Southern Brave is full of experienced and young players of the t20 format. The batting order of this team is also strong and some well-known hitters of the t20 format are part of the squad of this team, so the winning chances of today match for Southern Brave have been increased. The equation of who will win today’s cricket match prediction and who will win the cricket match today is mentioned as under.

The 8th Match match of The Hundred League 2022 is going to be held at Edgbaston, Birmingham. We had observed in the previous matches played here that the pitch here at this venue is good for batting. The track is slower than the others we have seen and helps the spinners quite a bit. We are hoping that the surface is bound to get slower and be a bit more difficult for batting in this match. A score of 185 is going to be tough to chase.

Who Will Win Birmingham Phoenix vs Southern Brave, 8th Match The Hundred League-2022