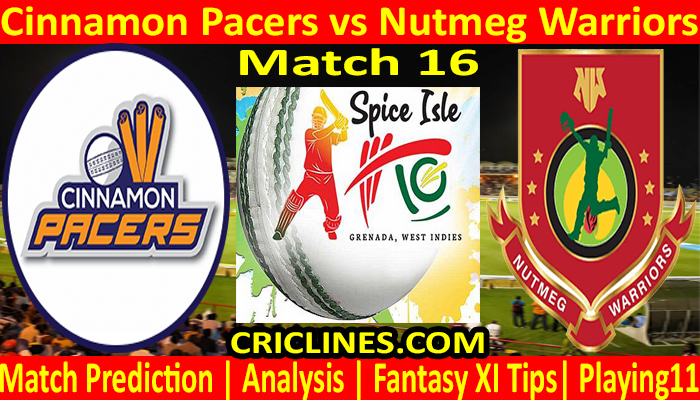 The world is ready to witness yet another big battle of T10 cricket. The 16th Match of Spice Isle T10 League 2021 is scheduled to play between Nutmeg Warriors and Cinnamon Pacers on Saturday, 5th June 2021 at National Cricket Stadium, St George’s, Grenada, St George’s. We are posting safe, accurate, and secure today match prediction for all matches of Spice Isle T10 League free.

Cinnamon Pacers are the second-best performing team of this season of the Spice Isle T10 League. They had played five matches with three wins to their name. They had lost two matches and are holding the 2nd position on the points table. They had won their most recent match against Ginger Generals in their most recent match with a margin of seven wickets. The batting order of Cinnamon Pacers performed well in the previous match and scored 96 runs in their inning of 10 overs. Anil Matthew was the highest run-scorer with 19 runs to his name. Keone George scored 16 runs while Larry Edwards could manage to score 14 runs.

Cinnamon Pacers lost the previous match due to the worst performance by their bowling unit. They failed to defend the target of 97 runs and leaked this target in nine overs. Larry Edwards was the most successful and highest wicket-taker from their side who picked two wickets in his two overs bowled out against just 12 runs. Nelon Pascal picked one wicket but he leaked plenty of runs. He was charged for 26 runs in his two overs bowled out. Redhead Nicklaus, Mc Donald Daniel, Charles Reynold, and Fraser Michael were the bowlers who failed to pick any wicket in the previous match.

The performance of Nutmeg Warriors had been good in this tournament. They had won three out of five matches played so far. They had lost two matches and are holding the 4th position on the points table. They had won their most recent match against Bay Leaf Blasters with a handsome margin of 43 runs. The way how the batting order of Nutmeg Warriors performed in the previous match was just outstanding. They scored a total of 120 runs in their inning of 10 overs. Andre Fletcher was the most successful and highest run-scorer from their side who smashed the inning of 69 runs on just 28 deliveries with the help of six boundaries and the same huge sixes.

Akeem Alexis scored 16 runs while Donald Mcdonald scored 11 runs. The bowling department of Nutmeg Warriors also had an outstanding performance in the previous match. They defended the target of 121 runs and leaked 77 runs in their inning of 10 overs. Akeem Alexis was the highest wicket-taker from their side who picked three wickets in his two overs bowled out against 23 runs. Dane Murray was the other bowler who performed well with the ball in the previous match. He picked two wickets in his two overs bowled out while he was charged for just two runs. Josh Thomas and Darel Cyrus picked one wicket each while Haston Jackson, Andre Fletcher, and Sheldon Joseph were the bowlers who failed to pick any wicket.

The 16th Match of Spice Isle T10 season 2021 is scheduled to be held at National Cricket Stadium, St George’s, Grenada, St George’s. Fewer matches had been played here. A score near about 110 can be difficult for the chasing team.