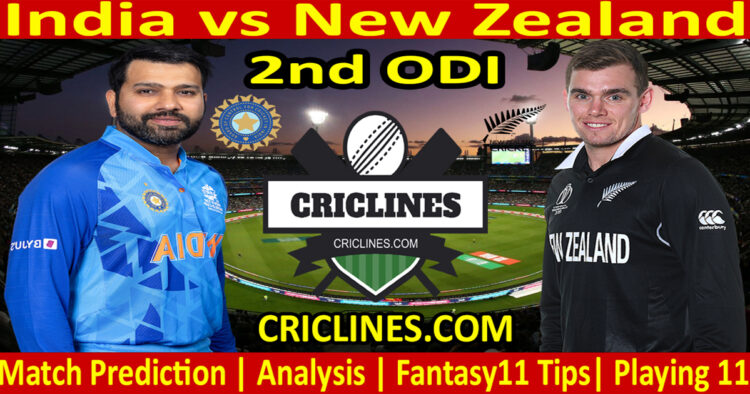 The world is ready to witness yet another big battle of ODI cricket. The 2nd ODI match of the New Zealand tour of India, 2023 is scheduled to be held on Saturday, 21st January 2023 at Shaheed Veer Narayan Singh International Stadium, Raipur. We are posting 100 safe, perfect, and accurate today match prediction for all matches of India and New Zealand.

The first ODI of India and New Zealand was a history-making match where nearly 700 runs were scored and New Zealand was just 12 runs short of the target. India proved once again that they can dominate any strong team, especially in the home conditions. New Zealand also performed well in each and every department even though they were on the losing side. India is still a favorite team to win this match but we can’t take New Zealand as a weak opponent.

The key strength of India had been its batting order and they crossed 350 runs in the previous four matches when they batted first. The batsmen of India play aggressive cricket and this strategy worked for the side. The batsmen of team India play more aggressively in their home conditions. The key batters of India like Virat Kohli and Shubhman Gill had been in superb form and had scored back-to-back hundreds. Rohit Sharma also had been good and his six-hitting capability had improved. SK Yadav and Ishan Kishan are other batsmen who can put a big total on the board for India in this match. Ishan Kishan is not playing as an opener and that is the main reason why he was not much impressive in the previous match.

Mohammad Siraj and Kuldeep Yadav had been good among the bowlers. These both bowlers picked wickets in each and every match they played. Washington Sundar and Shardul Thakur were part of the playing eleven of the previous match and we think that Umran Malik will get a chance to play this match. Remember that India scored 349 runs in the first ODI. Shubman Gill was the most successful batsman scoring 208 runs on 149 balls with the help of 19 boundaries and nine huge sixes. Rohit Sharma scored 34 runs. Mohammed Siraj was the most successful bowler picking four wickets in ten overs against 46 runs. Kuldeep Yadav also performed well and picked up two wickets in eight overs while he was charged with 43 runs. Shardul Thakur also picked two wickets while Shardul Thakur and Hardik Pandya picked one wicket each.

New Zealand lost the first match by the margin of just 12 runs and they showed up why they are the number one ODI team in the world. Six key batsmen of this team went back to the pavilion at a total of just 136 runs while chasing the target of 350 runs but Mitch Santner and Michael Bracewell took the charge and reduced the winning margin for India. They were just brilliant in tough conditions and we can expect that they will also perform well in this match. New Zealand must continue this strategy in this match otherwise, they lost this match by a big margin.

The bowling unit of New Zealand was not very effective in the first match. Henry Shipley and Lockie Ferguson were not impressive in the opening overs while Blair Tickner also proved expensive. Michael Bracewell and Mitchell Santner were impressive bowlers in the first match. Shipley and Daryl Mitchell picked two wickets each while Lockie Ferguson, Tickner, and Santner picked one wicket each. Michael Bracewell was the most successful and highest run-scorer in the previous match with a century to his name. He scored a total of 140 runs on just 78 balls with the help of 12 boundaries and 10 huge sixes. Mitchell Santner scored 57 runs while Finn Allen could manage to score 40 runs.

India had played a total of 1024 ODI matches where they won 536 matches and opposing teams won 436 matches. Their 43 matches ended with no result and nine matches were tied.

New Zealand had played a total of 796 ODI matches so far. They won 366 while other teams won 382 matches. 42 matches of New Zealand came with no result six matches were tied.

India played 114 ODI matches against New Zealand where they won 56 matches and New Zealand won 50 matches. 07 matches between New Zealand and India came without any result while one match was tied.

The 2nd ODI match of the New Zealand tour of India is going to be held at Shaheed Veer Narayan Singh International Stadium, Raipur. The pitch at this stadium is excellent for batting. The boundaries at this venue are short and will bring the spinners into play. The pitch will continue to be good for batting throughout the match. It also has a bit of help for the spin bowlers. As per the live cricket score, a total of 300 runs should be par score.

The weather forecast in Raipur on match day is good for a cricket game. There are almost no chances of rain and we may have a full match to watch.

We had provided you with the above-mentioned today cricket match prediction on the basis of our research, understanding, and analysis. You can consider the point we had provided you and the final decision will be yours.