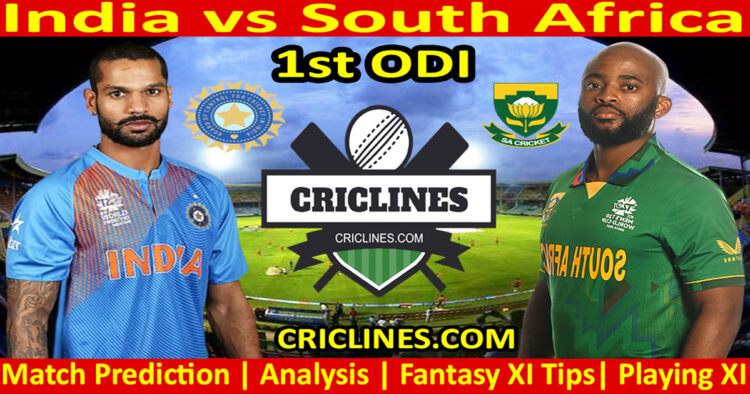 The world is ready to witness yet another big battle of ODI cricket. The 1st ODI match of the South Africa tour of India, 2022 is scheduled to be held on Thursday, 6th October 2022 at Bharat Ratna Shri Atal Bihari Vajpayee Ekana Cricket Stadium, Lucknow. We are providing 100 safe, perfect, and accurate today match prediction of India and South Africa.

India had won the series of three T20 matches with 2-1 against South Africa and lost a golden chance to have a whitewash. Now they are going to face South Africa in three ODI matches. India had made a lot of changes in their squad for this series and a totally different team will face South Africa. Remember that India also rested its key players in the third T20 match.

South Africa bounce back strongly after losing two early T20 matches and won the third match with a handsome margin of 49 runs. They avoid a clean sweep and now will face India in the ODI series. South Africa also made some major changes in their squad for the ODI series.

India is going to play this series of three ODI matches against South Africa with a totally different team than it was in the T20 series. A totally fresh squad had been selected for this series and they also had changed their captain. Shikhar Dhawan had been appointed as a new captain for the ODI series in place of Rohit Sharma. He is an experienced batter and had played 158 ODI matches for India. The batting order of India is also totally changed. Rajat Patidar had been selected for team India and we sure that he will get an ODI cap in this series may be in the second match. Remember that Rajat Patidar had played for RCB in IPL and had scored 404 runs in 12 matches with an average of 40.4 and has one hundred and two fifties to his name. He also played for India A team.

Ruturaj Gaikwad had played some T20 matches for team India but this will be his debut in ODI cricket. Shubman Gill, Shreyas Iyer, and Rahul Tripathi are other batters in the squad of team India for this series. Ishan Kishan and Sanju Samson are wicket-keeper batters in the squad of team India. The bowling unit of India is also fresh for this series and almost all bowlers were not part of the T20 team. Shardul Thakur, Kuldeep Yadav, Ravi Bishnoi, Avesh Khan, Mohammed Siraj, and Deepak Chahar are the leading bowlers of India. Mukesh Kumar also had been picked in team India and we can expect that he will make his debut in the second or maybe third ODI match.

Wayne Parnell, Andile Phehlukwayo, and Dwaine Pretorius are all-rounders in the squad of South Africa while Heinrich Klaasen and Quinton de Kock are wicket keepers in the South Africa team. Quinton de Kock had is good form. He scored 69 runs in the second T20 match and 68 runs in the third T20 match. He also played a lot of cricket in the conditions of India and we think that he can be dangerous for the bowlers of India. Keshav Maharaj, Lungi Ngidi, Anrich Nortje, Kagiso Rabada, and Tabraiz Shamsi are the leading bowlers of South Africa for this series.

India had played a total of 1011 ODI matches with 529 wins to their name. They had lost 432 matches while their 41 matches ended with no result and nine matches were tied.

South Africa had played 644 One Day Internationals. They had won 393 matches and lost 224 matches. Their 21 matches ended with no results and six matches were tied.

India had played 87 matches against South Africa where they won 35 matches while South Africa won 49 matches. Three matches between these two teams ended with no result.

The 1st ODI match between India and South Africa is going to be played at Bharat Ratna Shri Atal Bihari Vajpayee Ekana Cricket Stadium, Lucknow. The pitch at this stadium is excellent for batting. The boundaries at this venue are short and will bring the spinners into play. The pitch will continue to be good for batting throughout the match.

The weather forecast in Lucknow on match day is good. There are almost no chances of rain and we should have a full match.

Who Will Win India vs South Africa 1st ODI

Who Will Win India vs South Africa 1st ODI Toss-IND

Who Will Win India vs South Africa 1st ODI Match-IND