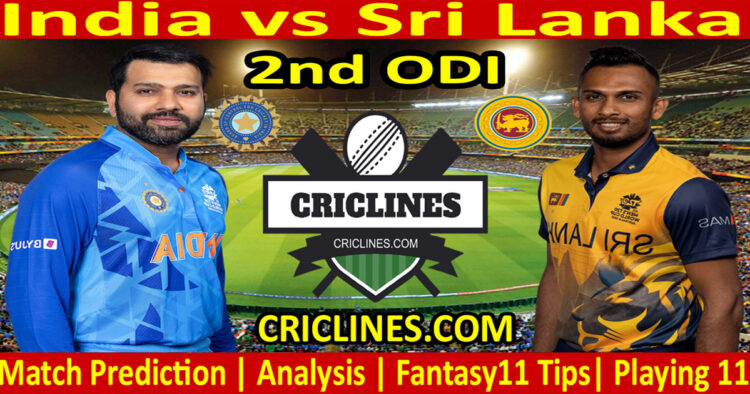 The cricket fans are ready to witness yet another big battle of ODI cricket. The 2nd ODI match of the Sri Lanka tour of India, 2023 is scheduled to be held on Thursday, 12th January 2023 at Eden Gardens, Kolkata. We are posting 100 safe, perfect, and accurate today match prediction for all matches of India and Sri Lanka.

The ODI series of India and Sri Lanka is now shifting to Kolkata. India had a kick start to this series of three matches and had a win over Sri Lanka with a handsome margin. This was a high-scoring match where more than 650 plus runs were scored in both innings. India is trying to get the best team for the upcoming ODI World Cup and we think that they will make a couple of changes in the final playing eleven for this match.

The bowlers of Sri Lanka struggled in the first match but they showed the power of the batting order. They scored more than three hundred runs. They get some help from their bowlers, they care surely give a tough time to India and can level the series of three ODI matches.

India added its key players to the ODI squad and we saw the result. Virat Kohli and Rohit Sharma were just outstanding in the first match. Virat Kohli scored his 45th ODI hundred. KL Rahul was moved to the fifth batting position and he also performed well. India scored a total of 373 runs in 50 overs while batting first. Virat Kohli proved the highest run-scorer with 113 runs to his account on 83 balls with the help of 12 boundaries and one huge six. Rohit Sharma also had an outstanding performance with the bat and scored 83 runs on just 67 balls with the help of nine boundaries and three huge sixes.

KL Rahul scored 39 runs while Shreyas Iyer could manage to score just 28 runs. The bowling unit of India was not much impressive even though they defended the target of 374 runs but leaked 306 runs in 50 overs. Mohammed Shami, Mohammad Siraj, Hardik Pandya, Umran Malik, Yuzvendra Chahal, and Axar Patel were used as bowlers in the first match. Umran Malik proved the highest wicket-taker from their side with three wickets to his name in eight overs against 57 runs. Mohammed Siraj was the most economical bowler. He picked two wickets in seven overs while he was charged for 30 runs. Mohammed Shami, Hardik Pandya, and Yuzvendra Chahal picked one wicket each while Axar Patel was the only bowler who remained wicket-less. He leaked 58 runs in ten overs.

Sri Lanka won the toss and decided to field first to restrict India to a low total but they totally failed and leaked a lot of runs, especially in the middle overs. They leaked 373 runs in 50 overs. They used seven bowlers in the first match and Kasun Rajitha was the highest wicket-taker from their side. He picked up three wickets in ten overs but leaked a lot of runs. He was charged for 88 runs. Dilshan Madushanka, C Karunaratne, Dasun Shanaka, and Dhananjaya de Silva picked one wicket each.

W Hasaranga and D Wellalage were the bowlers who failed to pick any wicket. The batting order of Sri Lanka performed well but failed to chase a big total on the board and scored 306 runs while chasing the target of 374 runs in 50 overs. The skipper, Dasun Shanaka was the most successful and highest run-scorer from their side who had a century to his name. He scored the second hundred of his ODI career. He scored a total of 108 runs on 88 balls with the help of 12 boundaries and three huge sixes. Pathum Nissanka also performed well and scored 72 runs but his strike rate was poor. He faced 80 balls and smashed 11 boundaries. Dhananjaya de Silva scored 47 runs while Kusal Mendis and Dunith Wellalage failed to open the account on the scoreboard.

India had played a total of 1021 ODI matches where they won 533 matches and opposing teams won 436 matches. Their 43 matches ended with no result and nine matches were tied.

Sri Lanka had played a total of 881 ODI matches so far. They won 401 while other teams won 436 matches. 35 matches of Sri Lanka ended with no result five matches were tied.

India played 163 ODI matches against Sri Lanka where they won 94 matches and Sri Lanka won 57 matches. 11 matches between Sri Lanka and India came without any result while one match was tied.

The toss is going to play an important role in the decision of each and every match of this series. According to toss prediction, the team who will win the toss may elect to field first.

The 2nd ODI match of the Sri Lanka tour of India is going to be held at Eden Gardens, Kolkata. The pitch at this stadium is excellent for batting. The boundaries at this venue are short and will bring the spinners into play. The pitch will continue to be good for batting throughout the match. The pitch on this venue is good for batting. It also has a bit of help for the spin bowlers. As per the live cricket score, a total of 190 runs should be par score.

The weather forecast in Kolkata on match day is good. There are almost no chances of rain and we may have a full match to watch.

Dream11 Prediction for India vs Sri Lanka. After checking the latest player’s availability, the Dream 11 Team for this match of India and Sri Lanka is mentioned under.

We had provided you with the above-mentioned today cricket match prediction on the basis of our research, understanding, and analysis. You can consider the point we had provided you and the final decision will be yours that you have to make at your own risk.